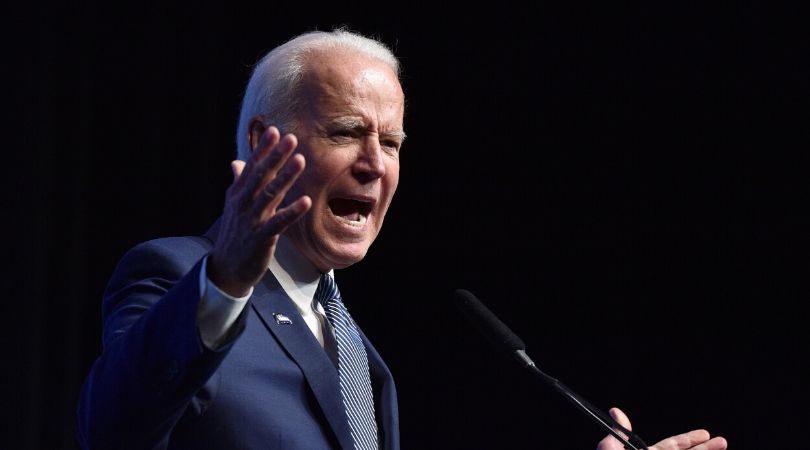 Urges not to confuse gaffes with character flaw

WASHINGTON (ChurchMilitant.com) - In the wake of Joe Biden's "you ain't black" comment currently going viral on social media, a black leader claims the former vice president has done nothing for the African-American community other than "lock them up."

Reminiscent of his "They're going to put y'all back in chains" comment while campaigning as vice president against Mitt Romney in 2012, this recent controversy came during an exchange with black host Charlamagne tha God on the show The Breakfast Club.

Dennard emphatically states that this isn't just a Biden "gaffe," nor should it be seen that way. "We've got to stop calling these gaffes," he urged. "We need to stop calling these 'insensitive statements'. No, they're bigoted. They're racist, and it's exposing Joe Biden's long history. Stop giving him cover for being a bigot," he said emphatically.

Tired of being told what party to vote for as a black American, Dennard notes he sees no other black or Democrat politician pushing back at what he calls Biden's racism.

"I have been waiting to hear Ambassador Susan Rice, Senator Kamala Harris, Speaker Nancy Pelosi [and] Stacey Abrams stand up and say something about this, but they're not because it's not about the people [or] the black community," Dennard stated. "It’s about the black vote. That's all they're concerned about. It's all politics."

Stop giving him cover for being a bigot.

Dennard does not appreciate white people telling him how to be black, or feeling pressure from other black people who insinuate he isn't black enough if he votes Republican.

The RNC and the Trump campaign are going to be very aggressively going after Joe Biden. The impact of his statement not only was offensive to black Republicans or conservatives — or just free-thinking black Americans like myself who are supporting President Trump — but it's also offensive to any black person who decides to just be a free thinker. ... He's essentially saying, "If you are not on my team — Joe Biden's team — you're not black."

Identity politics begins with identity psychology, Dennard appreciates, i.e., being able to convince certain people they must act and vote in a particular way. He sees this type of coerced group-think as the Left's method of maintaining power:

You have Joe Biden trying to put people in a box and think, "You've got to think the way I want you to think. If you don't think that way I'm going to pull away your identity. I'm going to pull away your cultural connection. I'm going to say that you are not a part of the community." That is an offensive thing to say, because this is exactly what they did during slavery. They wanted slaves to not be able to read and to write and to remain dumb and illiterate so that we wouldn't be able to be educated and learned and advance and grow and prosper.

It takes a special kind of courage, Dennard contends, to do what the likes of Clarence Thomas, Candace Owens, Kanye West and other black Americans have done, being attacked by the liberal media establishment the entire way.

You cannot go to a 7-Eleven or a Dunkin' Donuts unless you have a slight Indian accent.

"It is a way to suppress the vote," said Dennard. "It is a way to discourage people from daring to be able to do like Kanye West did and do like Vernon Jones did down in Georgia. ... When you talk about voter suppression, this is a tactic from the Left that we're seeing play out by their nominee."

Dennard is convinced that in the 2020 presidential race, Biden is the one with racist tendencies, not Trump, as the mainstream media would have you think.

"Let's start with the Clinton crime bill, which [Biden] wrote," he said, noting that the former vice president has not "done anything to directly impact the black community in a positive way besides lock us up."

"Let's talk about how he talked about Barack Obama," he continued, recalling Biden's description of the former president as a black man who is "articulate, bright and clean."

"Let's talk about how he talked about Indian-Americans," Dennard said, pointing to Biden's 2006 suggestion that "You cannot go to a 7-Eleven or a Dunkin' Donuts unless you have a slight Indian accent."

"Let's talk about how he talked about black kids rubbing their hands on [his] leg because they had never seen curly hair, and 'Corn Pop', and little roaches and people getting locked up for crossing the street," Dennard added.

When you talk about voter suppression, this is a tactic from the Left that we're seeing play out by their nominee.

In a new Rasmussen Reports Poll, most people remain suspicious of politicians who play the "race card," seeing their references to racial topics as an attempt to win as opposed to fixing minorities' problems. Yet, most black people still see Democrats as doing more for them than Republicans.

African-Americans (60%) who historically vote overwhelmingly for Democratic candidates are much more likely than either whites (44%) or other minority groups (49%) to believe the Democratic Party has done more for them than the Republican Party. One-third (33%) polled believe political candidates discuss racial issues too much, 34% too little and 24% believe the level of discussion is about right.