During a 1974 interview, the young senator took exception to the 1973 landmark case: "I don't like the Supreme Court decision on abortion. I think it went too far. I don't think that a woman has the sole right to say what should happen to her body."

Of course, fake Catholic Biden is now so radically pro-death he even backs crafting federal law to protect abortion if the anticipated conservative bloc on the U.S. Supreme Court strikes down Roe. During a town hall Oct. 5, the former vice president reaffirmed his intentions during the run-up to the Senate's presumed confirmation of conservative Amy Coney Barrett to the High Court.

"Number one, we don't know exactly what she will do, although the expectation is that she very well may overrule Roe, and the only responsible response to that would be to pass legislation to make Roe the law of the land," reaffirmed Biden. "That's what I would do."

Roe v. Wade is the law of the land, and we must fight any and all attempts to overturn it.

Reacting the same day to a challenge of a Lousiana abortion law brought before the Supreme Court, Biden tweeted: "Roe v. Wade is the law of the land, and we must fight any and all attempts to overturn it. As president, I will codify Roe into law and ensure this choice remains between a woman and her doctor."

The left-surging former senator didn't always wish to force taxpayers to fund the slaughter of the unborn. In 2007, Biden — by then a senator for more than 30 years — was asked on Meet the Press if he was "still opposed to public funding" for abortions.

"I still am opposed to public funding for abortion, and the reason I am is, again, it goes to the question of whether or not you're going to impose a view to support something that is not a guaranteed right but an affirmative action to promote," clarified the soon-to-be vice president.

NBC News exposed a 1994 letter from Biden telling a constituent that he had voted against federal funding of abortion "on no fewer than 50 occasions." In the letter, Biden writes, "The government should not tell those with strong convictions against abortion, such as you and I, that we must pay for them."

But as Democratic presidential candidate in June 2019, Biden confirmed he would repeal the Hyde Amendment, which protects taxpayers from funding abortions.

"If I believe health care is a right, as I do, I can no longer support an amendment that makes that right dependent on someone's ZIP code," he said.

We need judges who will respect Roe v. Wade as the law, and we need a Congress that will protect reproductive rights.

Biden's official campaign website restates the politician's intention of repealing Hyde: "Biden supports repealing the Hyde Amendment because health care is a right that should not be dependent on one's zip code or income."

He also supports having a judge's preconceived notions on abortion be the litmus test when picking or confirming any judicial nominee to the High Court.

In March, Biden tweeted, "We need judges who will respect Roe v. Wade as the law, and we need a Congress that will protect reproductive rights. If I'm president, that leadership will start at the top."

This is a far cry from his stated position in the 1990s and early 2000s. During a 1990 Senate Judiciary hearing for now-retired Justice David Souter, Biden took the opposite view.

"I do not believe that the nominee should have to answer how he would rule on Roe," said the senator.

But he has since flipped. At the Democratic primary debate in February, the moderator asked Biden, "Would there be a litmus test on abortion?"

He responded, "Yes. Look, here's the deal. Litmus test on abortion relates to the fundamental value of the Constitution. A woman does have a right to choose."

The confirmation of President Trump's third conservative judicial pick for the Supreme Court tilts the High Court to the right. The Left fears the conservative majority will sink Roe based on the so-called "right to privacy" on which it is based. This has led the Biden ticket to discuss packing the Court with liberal justices.

The day after the topic came up at the vice presidential debate in October, reporters queried Biden on the issue.

"You'll know my opinion on court packing when the election is over," he replied.

Trying to get a straight answer out of Biden a day later, a reporter began, "Well sir, don't voters deserve to know ..."

"No, they don't deserve to know," he retorted. 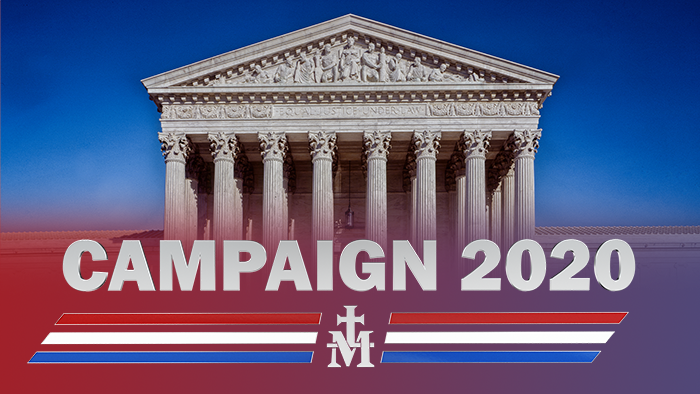 Watch
Locking Down Their Power
By Paul Murano   •   0