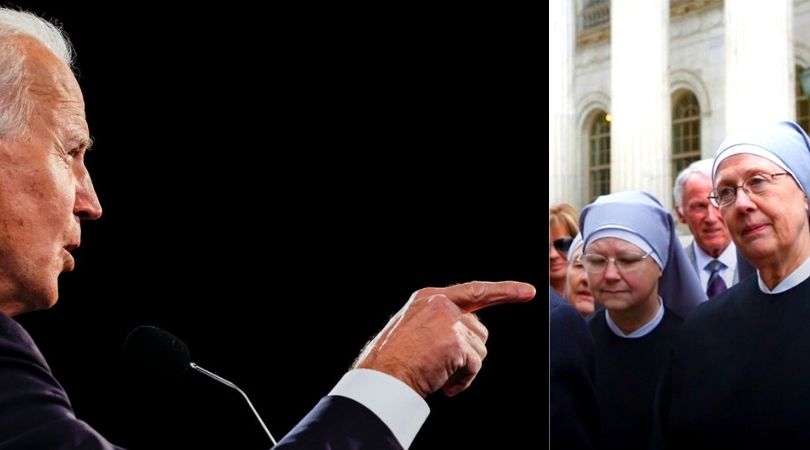 Former president Barack Obama's notorious HHS contraceptive mandate in 2012 attempted to force even the Little Sisters of the Poor to provide their lay employees with insurance coverage for sterilization, contraceptives and certain abortifacient drugs. This came in spite of assurances to the contrary offered that same year by then-vice president Biden.

At the vice presidential debate, the self-styled Catholic declared:

In his majority opinion just this year, Justice Clarence Thomas took account of the Little Sisters' nearly eight-year struggle for religious freedom that Biden had promised would never materialize.

Leftists hauled the Little Sisters all the way to the U.S. Supreme Court not just once but a second time as well.

"But for the past seven years, they — like many other religious objectors who have participated in the litigation and rulemakings leading up to today's decision — have had to fight for the ability to continue in their noble work without violating their sincerely held religious beliefs," wrote Thomas.

This current state of affairs isn't good enough now for Biden, who in 2012 claimed "My religion defines who I am." After the Little Sisters won their latest Hight Court victory in July, Biden vowed to reverse Trump's exemption that freed the Little Sisters and once again force them and other religious-minded employers to provide for employee contraceptives in insurance plans.

The Sisters' High Court victory in July was a direct result of the Trump administration establishing an exemption regarding Obamacare, also called the Affordable Care Act. Just one day after the Supreme Court ruling that upheld Trump's exemption for the Little Sisters, Biden vowed if elected he'd turn the tables again on such religious groups.

As disappointing as the Supreme Court's ruling is, there is a clear path to fix it: Elect a new president who will end Donald Trump's relentless attempts to dump all aspects of the Affordable Care Act. If elected, I will reinstate the Obama-Biden policy that existed before the Hobby Lobby decision, granting an exemption for places of worship and accommodation for non-profit organizations with religious missions.

In an article titled "Joe Biden vs. the Nuns," The Wall Street Journal (WSJ) summarily dismissed it as meaningless.

Joe Biden's decade-long war against Catholic nuns and the Little Sisters of the Poor is finally over.

"By the way, under his 'accommodation,' the Little Sisters' employees would be provided contraceptives 'through their insurance company or a third-party administrator,'" wrote the WSJ. "This sounds exactly like the fig leaf they rejected years ago."

Trump's camp, however, proclaimed the High Court ruling a victory for religious freedom — not only for the Little Sisters but for all people of faith.

"Joe Biden's decade-long war against Catholic nuns and the Little Sisters of the Poor is finally over," Trump 2020 Deputy Communications Director Ali Pardo declared. "Today's Supreme Court ruling is a landmark win for religious liberty. Unlike Joe Biden, President Trump has been a staunch defender of religious freedom since taking office and will always fight to defend communities of faith."