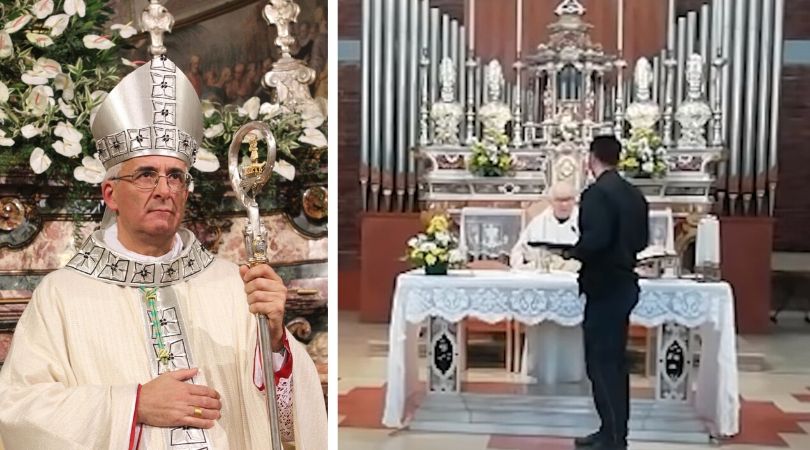 SONCINO, Italy (ChurchMilitant.com) - An Italian bishop notorious for his hostility to the Latin Mass is censuring a courageous priest who continued celebrating Mass despite paramilitary police ordering him to stop.

Bishop Antonio Napolioni, an LGBT advocate, denounced Fr. Lino Viola on the Cremona diocese website for failing "to comply with the current emergency legislation that prohibits the celebration of the Mass in the presence of the faithful."

Refusing to condemn Sunday's heavy-handed police raid on the church, Napolioni instead "underlined with regret" that the priest's behavior was "in contradiction with the civil and canonical norms" laid down for the liturgical and sacramental life of the Church during the pandemic.

Police burst into the church of St. Peter the Apostle in the hamlet of Gallignano, near Soncino, and going up to the altar, ordered Fr. Viola to stop the celebration. Viola refused, calling the police intrusion "an abuse of power" and continued saying Mass, observing that there were only a dozen people in church keeping safe distance from each other and wearing masks (see below for the script and translation of video).

Responding to Bp. Napolioni's statement, Italian commentator Andrea Zambrano maintained that it was the police and not the priest who had violated both criminal and canon law.

"If there was a crime, it was a crime of disrupting a religious service (prosecutable ex officio) by the Carabinieri who entered the church without notifying the ecclesiastical authority. Without there being any urgent need, they tried to stop the ceremony without justification," Zambrano argued.

"The rules laid down for the pandemic emergency, in fact, do not allow this disturbance, nor do they allow [the police] to prevent the celebration of religious ceremonies," he emphasized.

Article 405 of the Italian Criminal Code makes turbatio sacrorum (disruption of sacred service) a prosecutable offense punishable by up to two years imprisonment for anyone who disturbs or impedes a religious function in the presence of a minister of worship — either at the start to prevent the service from commencing or while a service is in progress.

If the turbatio sacrorum is accompanied by violence or threats, the offender faces up to three years in prison, according to top Italian legal website Brocardi.

Further, article 5 paragraph 2 of the 1984 treaty between the Holy See and the Republic of Italy states that "except in cases of urgent necessity, the police force shall not enter buildings open to worship for the purpose of carrying out its duties without first advising the ecclesiastical authority thereof."

Breaking ranks with the Italian Bishops' Conference (CEI), which reported the censure against Fr. Viola in the episcopal publication Avvenire, Cdl. Angelo Becciu, prefect of the Congregation for the Causes of Saints, condemned the police disruption of the Eucharist.

"I told a dumbfounded priest what happened to a confrere in the diocese of Cremona. The principle that no authority is allowed to interrupt Mass must be defended. If the celebrant is guilty of any infraction, he should be disciplined later, not during the Mass!" Becciu stated.

Standing Up to 'Fascism'

Urging Italians to watch the video of the Carabinieri disrupting the Mass, Italy's leading art critic Vittorio Sgarbi blasted the incident as a prelude to "fascism," calling those who stopped him "little fascists dressed up in police uniforms."

In a video post uploaded to his website, Sgarbi, who is not a practicing Catholic, hailed Fr. Lino as a "hero of civil and religious liberties."

If there was a crime, it was a crime of disrupting a religious service.

Fr. Lino's "no" is the "no" to Caesar who, drunk with power, claims that he is also given what belongs to God. It is Cdl. Zen's "no" to the Vatican kneeling before the Chinese Communist Party. It is Don Minzoni's "no" to the fascist claim to ban Catholic Scouting. It is the "no" of countless Churchmen who over the centuries have defended religious freedom from state interference.

Langone slammed "the bishop of Cremona who, aligned with a zealous government, immediately issued a statement against his parish priest."

Bishop Napolioni also received flak in the local newspaper. Elizabeth Samek Lodovici, in a letter to the editor of Cremona Oggi, expressed "full solidarity" for the priest's "faith and courage."

"I hope that the bishop and the Italian Bishops' Conference will put an end to this intolerable and unconstitutional interference by the government whose modus operandi is summarized by a 'yes for cigarettes' but 'no for Eucharist,'" wrote Lodovici, saying she would "make a contribution towards the payment of the high penalty I find illegitimate and unjust."

Police imposed fines of €680 on the priest and €280 on each congregant present at the Mass. Fr. Viola has told his parishioners not to pay. "If anything, the parish will take care of it. I'm convinced that I haven't created an assembly," he said.

Viola later clarified that a number of people present at the Eucharist had just lost loved ones in the pandemic. "It wasn't human to send them out," he remarked.

Fr. Lino's 'no' is the 'no' to Caesar who, drunk with power, claims that he is also given what belongs to God.

In March, Church Militant reported on Bp. Napolioni's decision to uphold a ban on the Latin Mass begun by his predecessor on the grounds that such "objectively disharmonious initiatives" threaten "ecclesial communion" and should not be introduced into the diocese.

In November 2018, following the Vatican Youth Synod, he hosted the second "table of dialogue" with "LGBT Christians" in Santa Maria del Fonte, Caravaggio.

Church Militant obtained a transcript and translation of the conversation of the incident seen in the above video.

Priest: No, because this is an abuse of power. Because of our bishops and so on ... I also asked the mayor too.

We are 2, 4, 6, 8, 10 ... 13 people, in an environment of 300 square meters, so it is not written that we cannot celebrate without the faithful, the presence of the faithful that is naturally contained and that there is no crowd.

Here we have no crowds. Everyone has their mask. I don't touch the Eucharist because I put it with tweezers so eh ...

PRIEST reads: "I await the resurrection of the dead and the life and world to come, Amen."

Policeman: We spoke to the mayor now ...

Policeman: We spoke to the mayor now and he said he hadn't told her that. He said: "If you want to do Mass, do it with 2 or 3 altar boys who give you a hand, the camera to shoot, but not the faithful, okay?" Let's not fool ourselves!

The policeman asking the people in the church: Do you have a document? ... everyone? Those who do not have the document stand in line there and give me name and surname.

Priest: Okay, Let ... this is a real abuse of power. It is inconceivable. However I say it clearly and I will also say it at the press, okay, I'm not afraid. Okay, let's stay here; only the relatives for whom I celebrated Mass and who have recorded [their names] will stay here. Okay, go and then we'll see.

The priest turns to a lady: Yes, never mind, I will answer after the Mass, now I will continue the Mass. Go, yes, enough, we are having a celebration. We don't do ... these are puppeteers.

Priest resumes Mass: Pray brothers and sisters ... (the policeman approaches) No sorry, I am celebrating Mass, it doesn't matter, I will answer the mayor after the Mass.

Priest: Then say that I'm not available now, because I'm celebrating.

Policeman: You can tell him. Why don't you tell him?

Then the Priest says: "No, sorry but ... please, okay? Pray brothers and sisters that my sacrifice and yours may be pleasing to God ...

Priest: Here, before I conclude this celebration, I am sorry for this regrettable gesture, in a church of 300 square meters, with 30 benches, there were 14 people in the church, plus the organist, if this is a gathering?! ... and above all what is really serious is that the force of order has come and that the mayor even wanted to interrupt to speak with the priest. This is truly regrettable.

Here, of course, I will pay the consequences, also from a civic point of view, but it must be said that it is time that they stop and with this, therefore, prudence I think that ... Here, here in this church, there were all the normal precautions, then everyone was with his mask, I said 30 benches, with 14 people, so, here ... okay, however now we will conclude the Holy Mass.