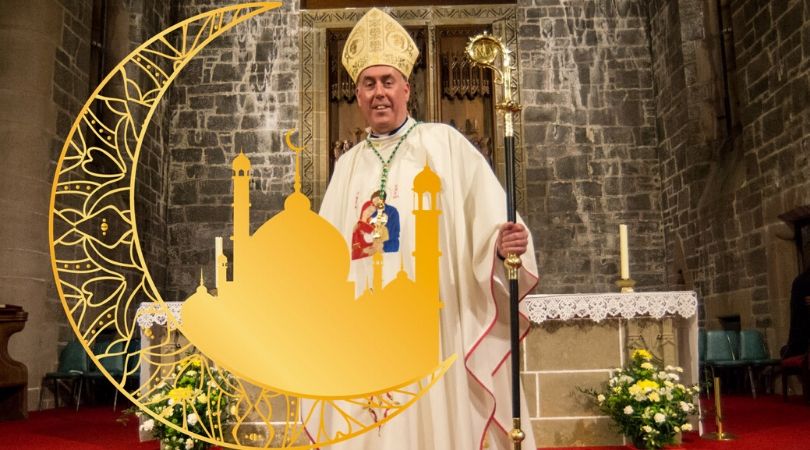 Shariah scholar: 'They are all Muslims now'

ARGYLL, Scotland (ChurchMilitant.com) - A Scottish bishop who participated in a Muslim-Catholic prayer service is being accused of surrendering to Islam after he joined in prayer to Allah but omitted any reference to Jesus or the Holy Trinity in his own prayers.

On Ascension Sunday, Bishop Brian McGee of the diocese of Argyll and the Isles joined 97 Muslims and Catholics to pray with Muslim cleric Dr. Mohammad Ali Shomali for "universal peace and [the] end of human sufferings" on the Islamic festival of Eid al-Fitr.

While Dr. Shomali prayed four prayers in English, his fellow-Muslim Sheikh Mohammed Pakdin prayed the Dhikr — based on Koranic verses — to which Bp. McGee and Catholics participating on Zoom responded with "Amin" or "Amen."

"Bishop McGee is probably assuming that 'Allah' is simply and solely the Arabic word for 'God.' He doesn't realize that the Muslim is praying Islamic prayers, while he [the bishop] is busy divesting his own prayers of specifically Christian content," distinguished Islamic scholar Robert Spencer, told Church Militant.

"This is part of the deception of the entire 'bridge-building' initiative, the entire process of Muslim-Christian 'dialogue' — the Christians are being manipulated into giving up their own traditions by people they naively assume want mutual respect and coexistence but who actually want only to bring them to Islam," the director of Jihad Watch and Shillman Fellow at the David Horowitz Freedom Center, stressed.

"They are all Muslims now," an Islamic jurist, speaking on condition of anonymity told Church Militant. "'Allah,' as used by Muslims, is most emphatically a repudiation of the Christian Trinity. Muslims do not use it as a generic term for God."

Bishop McGee doesn't realize that the Muslim is praying Islamic prayers, while he is busy divesting his own prayers of specifically Christian content.

"Islam means 'submission.' By surrendering their Christian distinctiveness and saying 'Amin' to Islamic affirmations of faith, they have become Muslims of a kind," he said.

The Arabic-speaking Islamic jurist, who listened to Church Militant's recording of the service, explained that the prayer was not "interfaith" as advertised: "First, it did not include members of any other religion except mostly Shia Muslims and Catholics. Second, there was no explicit or distinctive Christian contribution and Bp. McGee's prayers addressed to a generic deity were at best sub-Christian."

"Most importantly, the Dhikr which was prayed in Arabic to Allah, included a prayer for 'protection' for the 'righteous servants' of Allah. Dhikr is also used as ruqyah or exorcism and the protection it seeks is, among other things is from Satan as well as from all apostasy of the kuffār including Christian doctrines of the Trinity, atonement, crucifixion, death and resurrection of Jesus," the Shariah expert observed.

"Allah's Dhikr, stressed over a hundred times in the Koran, is 'the most effective weapon to overcome the enemy,'" the Shariah scholar explained.

The scholar also told Church Militant that the term "righteous servant" used in the Islamic prayers chanted during the service is "a very specific theological term" that is used exclusively of faithful Muslims and can never apply to Christians.

One of the characteristics of a 'righteous servant' of Allah is his total repudiation of the Holy Trinity.

Christians "should be aware that things are not always what they first seem on the surface," when dialoguing with Muslims, cautions Robert R. Reilly in The Prospects and Perils of Catholic-Muslim Dialogue. "A Muslim can see the same word and understand it differently."

While the Muslims co-leading the prayer service, including hostess Dr. Sonia Alam, spoke in detail about Ramadan and what it meant for Muslims, Bp. McGee and the Catholic participants including Sr. Isabel Smyth, remained silent on what the Ascension meant for Catholics.

Sister Smyth SND, interfaith advisor for the Scottish diocese of Paisley had organized a similar Muslim-Catholic prayer service the previous Sunday with over 188 Muslims and Catholics taking part.

Faithful Catholics slammed the service on social media expressing shock that Bp. John Keenan, considered by many to be one of the few orthodox bishops in Britain, would approve of this service.

Hundreds of negative comments were deleted from the diocese's Facebook page. Church Militant obtained screenshots of the posts before they were expunged.

Addressing Bp. Keenan directly, Tracy McGee Leszczynski wrote: "Surely you are not leading your people to pray with those who do not believe in the divinity of our Lord Jesus Christ or in the Most Holy Trinity? (as Bishop McGee is?) Isn't that very obviously breaking the first commandment? Pray tell us ... What is wrong in the Church hierarchy in Scotland?! Are you being blackmailed or threatened?!"

"Dare we hope there is a St. John Fisher among our Scottish bishops? Instead of 'uniting spiritually' with false gods (the exact request of Pope Francis) do you think they could be pressed upon to offer the holy sacrifice of the Mass in our churches and to 'feed my sheep' as specifically requested by Our Lord and Savior Jesus Christ?" Aoibhinn Bradley asked.

"These prayers and gestures of goodwill always go in only one direction. The bishop of Argyll prays with Muslims on Eid, but when have Muslims ever prayed with Christians on Christmas?" questioned Spencer, author of the bestselling The Politically Incorrect Guide to Islam and the Crusades.

Dhikr is also used as ruqyah or exorcism and the protection it seeks is, among other things is from Satan as well as from all apostasy of the kuffār including Christian doctrines of the Trinity.

"Muslim Brotherhood theorist Sayyid Qutb advised Muslims to build bridges with non-Muslims, but cautioned them that such bridges only went in one direction: to lead the non-Muslims to Islam. Not to engage in actual mutually respectful dialogue. But Catholic leaders refuse to face the possibility that some of their Muslim dialogue partners could be heeding Qutb's directives," Spencer told Church Militant.

I am a 58-year-old father of five adopted children seeking to raise them in the Catholic faith in all its fullness. I am increasingly concerned that in interfaith dialogue, Catholic school education that presents the State's vision on equality and sexuality and not the Church's teaching, and the denial of access to the sacrements with church closures there is a retreat from announcing the Good News with authority.

"Our calling is to give Christ's message rather than somehow syncretize with all faiths and all beliefs," the founder of Life Issues Conferences said.

During the service, McGee said that his approach was entirely in line with Pope Francis' Abu Dhabi declaration signed between the pontiff and the Grand Imam of Al-Azhar Mohamed Ahmed al-Tayeb. McGee was appointed by Pope Francis in 2015.

Church Militant contacted Bp. McGee asking why he expunged the Trinity and the name of Jesus from his prayers. We also asked him if the diocese was engaged in evangelizing Muslims and if he believed Muslims could be saved through Islam.

A spokesperson for Bp. McGee said: "For over half a century, since the creation of Pontifical Council for Interreligious Dialogue the church has sought to promote mutual understanding and respect between Catholics and the followers of others religious traditions. Bp. McGee's participation in the Muslim-Christian prayer was a continuation of that mission."

"While any questions on the formulation of the prayers used by Muslim participants should more appropriately be directed to them, Bp. McGee is content that the words used respect the divinity of our Creator and acknowledge the one true God," the spokesperson noted.

"As Pope Francis commented last year, to advance interreligious dialogue 'the first thing we have to do is pray, and pray for one another: we are brothers and sisters!' Bp. McGee was pleased to have the opportunity to do exactly that, reflecting the fact, that every year, the Pontifical Council for Interreligious Dialogue on behalf of the Catholic Church sends a message to the Islamic community on the occasion of the month of Ramadan and 'Id al-Fitr, the feast that concludes it," he added.