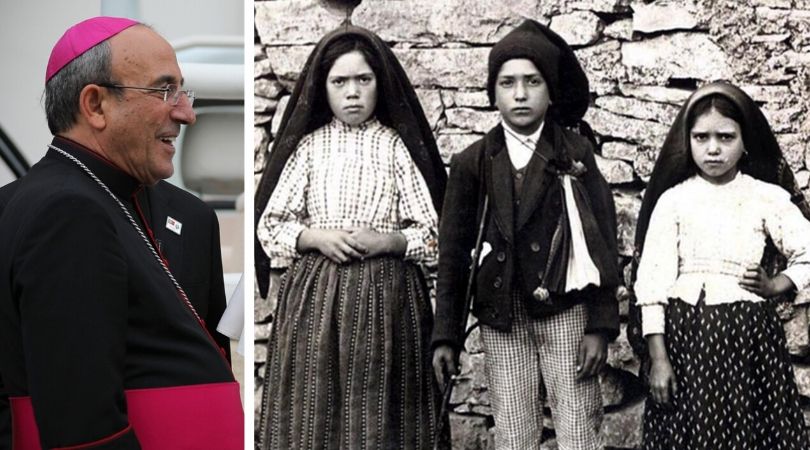 FATIMA, Portugal (ChurchMilitant.com) - The bishop of the diocese of Leiria-Fátima, who oversees the site of Our Lady's 1917 apparitions, is scoffing at orthodox cardinals and those who speak of the pandemic as divine punishment as doing so "out of ignorance, sectarian fanaticism or insanity."

Cardinal Antonio dos Santos Marto insists that the Wuhan virus is instead a wake-up call to "rethink the financial and economic system to achieve more justice and eliminate the flagrant inequality between the world's rich minority and the majority of the poor."

Marto, elevated to the cardinalate in 2018 by Pope Francis, echoes the pontiff's views and claims that the pandemic is a summons to "care more for our common home through an integral ecology, more fraternity and solidarity among the individuals and peoples and a more responsible citizenship."

In an interview with Religión Digital, Marto is asked "how is it possible that some clerics (including some high cardinals) continue to believe that the coronavirus is a 'punishment from God?'"

Fortunately we have not heard this expression here among us, in Portugal, at least publicly. This is not Christian. Only those who do not have in their minds or hearts the true image of the God of Love and Mercy revealed in Christ, through ignorance, sectarian fanaticism or insanity [make such claims].

Marto is seen to be lashing out at orthodox prelates, including Cdl. Raymond Burke, Cdl. Paul Josef Cordes and Bp. Athanasius Schneider, who interpret the pandemic in the light of Scripture and Tradition as divine chastisement for evil — especially, according to Schneider, for "the idolatrous veneration of the Pachamama" and for "allowing the so-called 'divorced and remarried' who are sexually active to receive Holy Communion."

Speaking to Church Militant, eminent Italian historian Professor Roberto de Mattei described the bishop of Fatima's words as "scandalous," explaining that "it contradicts not only the words of Our Lady of Fatima, who says that God is going to chastise the world by means of war, hunger and persecutions of the Church and the Holy Father, but the teaching of Sacred Scripture, and the words of previous popes and saints."

If men do not repent and better themselves, the Father will inflict a terrible punishment on all humanity.

Professor de Mattei situates the current pestilence in the context of the messages of Our Lady of Fatima, saying that this is the moment "to remember the message of Fatima, because the divine punishments, which have already been affecting the Church for many years, are making themselves visible to the whole society."

In 1917, three shepherd children — Lucia dos Santos and her cousins Francisco and Jacinta Marto — reported that the Blessed Virgin Mary appeared to them at the Cova da Iria, in Fátima, Portugal.

In a series of visions, Our Lady warned them of God's punishment if mankind did not repent: "When you see a night illumined by an unknown light, know that this is the great sign given you by God that He is about to punish the world for its crimes by means of war, famine and persecutions of the Church and of the Holy Father."

On March 25, 2020, Cdl. Marto renewed the consecration of Portugal and Spain to Jesus and Mary, adding the names of 24 other countries to the list, in order to implore Our Lady's intercession in the pandemic.

"The pandemic leaves bare the fragility and vulnerability of the human condition — made us aware that we are one vulnerable humanity and that we are called to be more supportive, because in this crisis no one is saved alone, as Pope Francis recalled," Cdl. Marto remarked in his interview.

"We want to respond to the virus pandemic with the universality of prayer, compassion and tenderness," he noted, nevertheless demanding that "priests must respect confinement as responsible citizens, so as not to infect others or be infected."

Fires, earthquakes ... nature is kicking in so that we take care of nature.

John Smeaton, chief executive of the Society for the Protection of Unborn Children, told Church Militant that "Cdl. Marto's extravagant insults directed at his fellow cardinals betray a surprising lack of understanding of Our Lady of Fatima's messages to the three little shepherd children."

"I would say to Cdl. Marto, who mocked his fellow cardinals, what Our Lord said to the Sadducees who sought to mock Him concerning the resurrection of the dead: 'Do ye not therefore err, because you know not the Scriptures nor the power of God?'"

Smeaton noted that "in her apparition on July 17, 1919, Our Lady told the children that if people do not stop offending God, and if reparation is not made in ways carefully and precisely described by Our Blessed Mother, many terrible punishments would ensue."

"And people have not stopped offending God. What's more, the pope himself has scandalized the faithful by openly breaking the First Commandment and several others. And the response of the overwhelming majority of cardinals, bishops, priests and laypeople has been silence," he continued.

Moreover, since Our Lady spoke to the children in 2017, there has been the greatest slaughter of human beings estimated at between one to two billion abortions carried out worldwide — more than all the people killed in all the wars in the whole of recorded human history, Smeaton said, explaining:

Whereas it's a prudential judgment whether a particular terrible disaster is a chastisement, there are various aspects of the pandemic which suggest that it is so: for example, the deprivation from Catholics worldwide of the Holy Eucharist is unprecedented and it reminds us painfully of the shameful abuse of the Body and Blood of Our Lord, which is commonly observed at Masses throughout the world, in particular at Novus Ordo Masses where Communion in the hand has led to countless sacrileges taking place.

Theologian Dr. Gavin Ashenden, who cites the Marian apparitions as one of the reasons for his conversion from Anglicanism to Catholicism, told Church Militant he found it "particularly odd that the present bishop of Fatima would want to assert a disconnect between the faithfulness of the Church, the rebellion of the world and God's hand in history."

"One would have to ask the present bishop of Fatima, if, given that this pandemic has uniquely closed the doors of churches throughout the world, where he finds his theological confidence and spiritual authority for insisting that this plague should be an exception to this principle?" Dr. Ashenden asked.

However, a number of bishops and cardinals, including Italian Cdl. Gianfranco Ravasi and Sydney Abp. Anthony Fisher, contend that the pandemic is not divine chastisement.

Bishop of Hildesheim Heiner Wilmer called the idea of a punishing God, "terrible and completely un-Christian," while according to Munich Cdl. Reinhard Marx, seeing the Wuhan virus as God's punishment, leads to a "very difficult and negative image of God."

Pope Francis has said the pandemic is nature's response to man's ecological sins: "God always forgives. We forgive from time to time. Nature never forgives. Fires, earthquakes ... nature is kicking in so that we take care of nature."

In a more recent interview, the pontiff claimed he didn't know if the pandemic is "the revenge of nature" but it was "certainly nature's response."