The diocese of Bismarck, North Dakota will no longer sponsor troops

BISMARCK, N.D., August 5, 2015 (ChurchMilitant.com) - A bishop is ordering his parishes to cut off all ties to the Boy Scouts.

Bishop David Kagan of Bismarck, North Dakota has been the first bishop to publicly denounce the Boy Scouts' decision last week to lift the ban on gay adult leaders, issuing a letter to the faithful stating the diocese could no longer in good conscience sponsor troops.

While there are indications that the BSA has a religious organization exception, which each local troop could invoke, that will provide no protection for any of our parishes and/or schools, which sponsor troops. Thus, effective immediately, the Catholic Church of the Diocese of Bismarck and each and every one of its parishes, schools and other institutions, is formally disaffiliated with and from the Boy Scouts of America. If your parish sponsors a troop, your priest has been asked to inform those persons associated with the BSA of this action and to inform the BSA itself of this decision. I regret my decision but, in conscience as the Chief Shepherd of the Diocese of Bismarck, I cannot permit our Catholic institutions to accept and participate directly or indirectly in any organization, which has policies and methods, which contradict the authoritative moral teachings of the Catholic Church.

He then offers a list of Catholic scouting alternatives available to the faithful:

The Boy Scouts are reacting with disappointment. Cory Wrolstad, field director of the Boy Scouts Northern Light Council, which covers troops throughout the state of North Dakota as well as several counties in Minnesota, South Dakota and Montana, says he is "saddened" by the bishop's decision.

"I think our biggest reaction is obviously a bit of disappointment, but really saddened. As a charter partner we've been partners with the Catholic diocese in Bismarck for over 66 years, where they have been a partner and supporting scouts and a ton of Catholic youth," says Wrolstad.

This will result in 180 scouts having to transfer to other units. 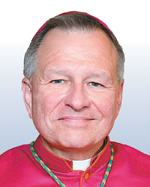 Meanwhile, Abp. Gregory Aymond of New Orleans has taken a more sanguine view of the Boy Scouts' policy change. "At this time the Archdiocese of New Orleans will continue to charter units with the Boy Scouts of America and, in keeping with our right to religious liberty, work to ensure that the adult leaders in our units are role models in living our Catholic faith," he said in an official statement. This is the same diocese that was the center of controversy several weeks ago when it was discovered its LGBT ministry site encouraged sexual activity among homosexuals. The site has since been taken down with an apology for the content.

Aymond's statement echoes that of the National Catholic Committee on Scouting, issued the day the ban was lifted. "[T]he resolution respects the needs of Catholic-chartered organizations in the right to choose leaders whose character and conduct are consistent with those of Catholic teaching."