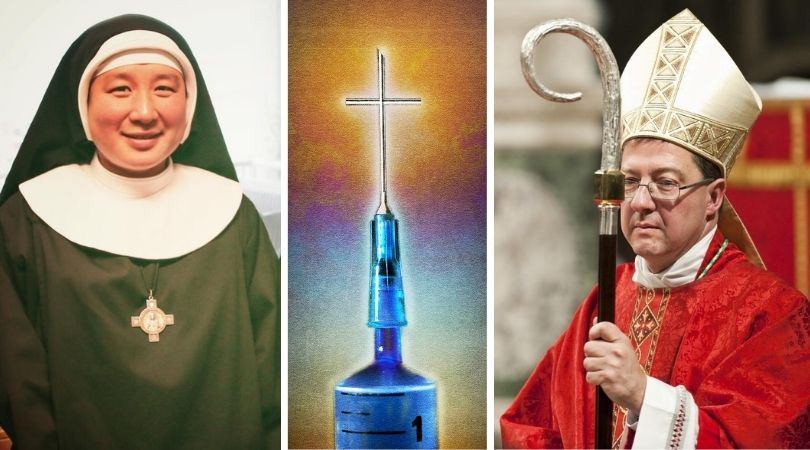 WESTMINSTER, England (ChurchMilitant.com) - One of Britain's most senior nuns, who conscientiously objects to taking the abortion-tainted COVID-19 vaccine and was reported to Rome by a vaccine-pushing bishop, is responding to false allegations planted in a British newspaper.

John Sherrington, auxiliary bishop of Westminster, reported Mother General Marilla to the Vatican after she refused to capitulate to his letters pressuring her to change her views on the vaccine, Church Militant has learned.

"I have been threatened on numerous occasions to be reported to the Holy See and in particular to the congregation for religious for reasons of perceived noncompliance," Mother Marilla told Church Militant in a statement Tuesday.

"In these cases, those who have issued such threats have almost entirely ignored fundamental rights," the nun added.

On Sunday, The Times wrote a hit piece citing unsubstantiated allegations that Mother General Marilla of the Benedictine Adorers of the Sacred Heart of Jesus of Montmartre had forced her nuns not to take the jab.

Without giving evidence for its claims, The Times reported that some of the allegations against Mother Marilla "relate to nuns feeling under pressure not to have the vaccine."

Mother Marilla, who heads the Tyburn Convent opposite Hyde Park in London, participated in freedom protests against the COVID lockdowns in May 2021 and was filmed asking demonstrators to "protect children" from a vaccine that "kills people."

Who has the liability for any death or injury resulting from these anti-COVID injections?

The diocese of Westminster confirmed that its auxiliary bishop, John Sherrington, had reported Mother General Marilla to the Vatican for raising an alert about the dangers of the jab to the Vatican's Congregation for Institutes of Consecrated Life and Societies of Apostolic Life.

In a detailed letter to Church Militant refuting the allegations, Mother Marilla explained how she had a phone conversation with The Times reporter David Collins, who admitted "he was not able to tell me which sisters were making the allegations."

Mother Marilla speaking to freedom demonstrators in London in 2021

I have communicated this by email, by writing on the community chalkboard and also verbally to a few individual sisters. I, in fact, do not know the vaccine status of any of our sisters because I have not asked them. It is their own business, and I do not pry into it. If sisters wish to tell me, that is their own choice.

The mother general told Church Militant "perhaps one or two sisters may have taken the vaccine" and she suspected this "because of an unusual adverse event which is very similar to a prevalent adverse effect of the vaccines."

Journalism without integrity is propaganda. Rightly do I say that, if anything, it is me that is being bullied.

"What upsets me more than being accused of bullying is the perception that our sisters are a bunch of cowardly, mindless ninnies who cannot think for themselves nor form their own opinions," she emphasized. "The sisters we have in our Congregation are intelligent, strong-willed, dedicated and determined women."

Mother Marilla also noted The Times had quoted her private and confidential letter written to Bp. Sherrington although she had "not given any permission whatsoever for it to be quoted to anybody whatsoever."

"None of the sisters have a copy of this letter," the nun maintained.

Church Militant has learned from an unrelated source that Sherrington, who has also snitched on other faithful clerics to their bishops, would have leaked the letter and planted the story in The Times.

Sherrington had written to the nun on several occasions expressing "concern about support that Mother Marilla had given to anti-vaccine protests and comments she had made criticizing the vaccine program," Westminster diocese told The Times.

The bishop used the authority of Pope Francis and archbishop of Westminster Cdl. Vincent Nichols to browbeat the nun by citing the pontiff's non-magisterial opinions on the jab and pro-vaccine guidance from the Catholic Bishops' Conference of England and Wales.

Sherrington, who misled British Catholics on COVID jabs in September 2020, said he "was sent letters" that the global superior of the contemplative order was distributing regarding the vaccine and "people were very concerned about her views."

You were made in the image and likeness of God. You were born free.

The report, coauthored by Catherine Pepinster, a pro-vax Catholic journalist and former editor of The Tablet — a liberal Catholic journal — also falsely claimed "many of the nuns at the convent have taken a vow of silence and rarely set foot in the outside world."

This is misinformation. None of our sisters have taken a vow of silence. In addition, it is quite clear on the videos taken during the particular demonstration mentioned that I was on the front doorstep of Tyburn Convent. I strongly defend my right to be standing on our convent's front doorstep.

"Enclosed nuns do not take a vow of silence — it's a widely held false assumption," the Carmelite Nuns of Great Britain tweeted, correcting the report coauthored by Collins and Pepinster.

Church Militant also spoke by phone to the nuns, who confirmed they do not take a vow of silence.

Responding to the newspaper's description of her as an "avowed anti-vaxxer," the nun said she "would have most likely described myself as pro-vax since I have had many, many vaccines from early childhood."

"The opinions that I have expressed over the anti-COVID injections have arisen out of a genuine and reasonable concern for the safety and health issues related to these same injections," she explained.

The outspoken nun also blasted the mainstream media for conducting "a veritable smear campaign" against her and against "the most eminent and respected professors and professionals of science and medicine" who have warned of the dangers of the jab.

"Who has the liability for any death or injury resulting from these anti-COVID injections? Who is to compensate for all that they have suffered?" the mother general asked. "It is long past the time to speak up for them."

"Journalism without integrity is propaganda. Rightly do I say that, if anything, it is me that is being bullied," she remarked.

This is misinformation. None of our sisters have taken a vow of silence.

"You were made in the image and likeness of God. You were born free," the mother general told demonstrators at a London protest last year. "Don't let them take your freedoms away from you."

Standing on the doorstep of her convent, she added:

Interestingly, Mother Marilla's convent is near the site of Tyburn Tree — the historic site of public hangings and Catholic martyrdom. During the Protestant Revolt, 105 Catholics were hung, drawn and quartered for refusing to take the oath attached to the Act of Succession.

This Act required all those who were asked to take the oath to recognize Anne Boleyn as King Henry VIII's lawful wife and their children legitimate heirs to the throne.

Bishop Sherrington and the diocese of Westminster did not respond to Church Militant's request for comment as of press time.