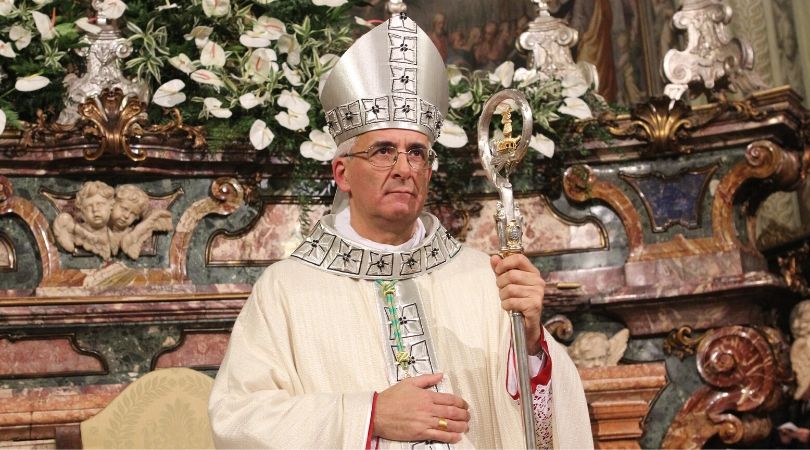 ROME (ChurchMilitant.com) - A bishop who gained notoriety across Italy for his hostility to the Latin Mass has been "hospitalized since Friday afternoon with lung symptoms attributable to COVID-19."

An updated press release from the northern Italian diocese of Cremona issued Monday reported the prognosis on Bp. Antonio Napolioni who is being treated by the Operational Unit of Pulmonology at the Maggiore Hospital in Cremona.

The diocesan statement, however, cautioned that "the diagnosis not yet confirmed" and "the outcome of the (pharyngeal) swab test" was still awaited. "Bp. Antonio is in stable conditions and in a positive mood," the release added.

Napolioni is the first bishop in Italy — and possibly in the world — to be hospitalized as a result of suspected infection from the coronavirus.

The delay in reporting the results of the throat swab — a test which takes just hours to run, meaning results could be ready within a day, according to Dr. Amesh Adalja, infectious-diseases specialist and a senior scholar at the Johns Hopkins Center for Health Security — is fueling speculation about Napolioni's condition.

"To arrive at a response under standard conditions it takes four to six hours, even if the main Italian centers involved are trying to reduce this period of time as much as possible," Italian science reporter Gianluca Dotti confirmed.

But it has now been five days since the bishop was hospitalized after suffering a "few days of fluctuating fever and some difficulty in the respiratory tract."

On the afternoon of March 6, Bp. Napolioni was admitted to the Maggiore Hospital to undergo further investigations and the COVID-19 "swab" test.

"The first diagnosis was that of viral pneumonia, now it is a question of whether COVID-19 actually caused it," a report noted.

The hospital said Napolioni "was tolerating well the therapies to which he is subjected according to the protocols followed by the staff led by Dr. Giancarlo Bosio, which provide for administering oxygen and antiviral drugs."

I am astonished by the bishop of Cremona. The Tridentine Mass is celebrated everywhere. I don't know why it is not in Cremona.

The head of the operational unit commented that the staff was impressed "by the positive mood of Msgr. Napolioni and by his collaborative spirit which contributes to giving courage to all operators so tested by this difficult situation."

Bishop Napolioni is upholding a ban on the Latin Mass begun by his predecessor on the grounds that such "objectively disharmonious initiatives" threaten "ecclesial communion" and should not be introduced into the diocese.

On March 27, 2017, Napolioni dismissed a supplication from over 100 Catholics who had been pleading with the previous bishop, Dante Lafranconi, for the Latin Mass since March 2009.

"These requests had already been made to my predecessor," Napolioni wrote, rejecting the request on the same grounds given by his predecessor and claiming that "in over 40 years the application of the conciliar liturgical reform has been serenely accepted throughout the diocese."

At a Feb. 2018 meeting, Napolioni reiterated his refusal to allow the Latin Mass in Cremona.

In April 2019, LifeSite News reported that Napolioni had "ordered a priest to cease celebrating the Mass in the Extraordinary Form after the traditional liturgy drew an increasing number of young lay faithful."

"I am astonished by the bishop of Cremona," Cdl. Giovanni Battista Re, Prefect Emeritus of the Congregation of Bishops and Vice-Dean of the College of Cardinals told La Provincia in an interview.

"The Tridentine Mass is celebrated everywhere. I don't know why it is not in Cremona," he said. "Across the world, it is generally enough to find a priest who is available to say the Mass," he added.

Bishop Napolioni, however, claimed that the Vatican backs his decision, despite his inability to substantiate his claim with documentary evidence. His claim also contradicts Pope Benedict XVI's 2007 motu proprio, Summorum Pontificum, which permitted the celebration of the Traditional Latin Mass if a "stable group" of faithful requests it.

In over 40 years, the application of the conciliar liturgical reform has been serenely accepted throughout the diocese.

While opposing traditionalist Catholics, Napolioni has been accused of welcoming heterodox Catholic groups. In November 2018, following the Vatican Youth Synod, for example, he hosted the second "Table of dialogue" with "LGBT Christians" in Santa Maria del Fonte, Caravaggio.

The main speaker at the event, moral theologian Fr. Pier Davide Guenzi, from the Catholic University of the Sacred Heart in Northern Italy, is a strong advocate of re-interpreting official Catholic teaching on homosexuality.

"I cannot remain silent in front of the blasphemies that are bestowed by digital, printed or parish pulpits when the earthquake is attributed the value of 'punishment of God for civil unions,' or ... for a Europe that has lost its Christian roots, or for other possible reasons," he wrote in a Facebook post.

Catholic and secular media have kept Bp. Napolioni in the public spotlight by continuing to report the spiraling Latin Mass debacle.

Meanwhile, two other priests in the diocese of Cremona have also faced critical issues related to the coronavirus emergency, Corrispondenza Romana reported.

Father Franz Tabaglio, parish priest of Grontardo, tested positive for the checks carried out by ATS Val Padana, and Fr. Claudio Rubagotti, parish priest of Casalmaggiore, was hospitalized at the Oglio Po hospital for breathing difficulties.

May 11, 2021
Get briefed on today's top stories with Christine Niles.
theDownload