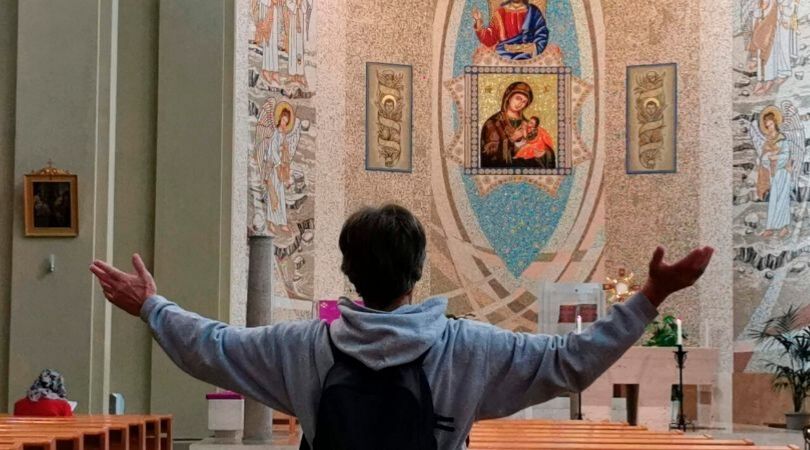 Public Masses restricted in Italy despite all-clear by State

ROME (ChurchMilitant.com) - Catholics desperate to return to Mass are accusing bishops of blackmailing them into an extended lockdown even after the government permitted churches to re-open for public worship.

While churches in most parts of Italy resumed public eucharists Monday, the bishops of Mondovì, Teggiano-Policastro and Pinerolo are telling parishioners that they cannot participate in eucharistic celebrations because of "the high risk of contagion."

Catholics are blasting the bishops for "using the Mass as an instrument of pressure" and of blackmailing clergy and laity into fulfilling certain conditions before they can be allowed to celebrate public Mass.

"There are bishops who do not intend to reopen the Masses even if authorized by civil power. Thus they continue to keep the faithful free of sacraments," leading Catholic epidemiologist Paolo Gulisano told Church Militant.

"Indeed, as in the case of the bishop of Pinerolo, if a priest does not prove that he cares for the poor and the 'least,' the Masses remain closed indefinitely. An order that smacks of blackmail!" Dr. Gulisano said.

In a pastoral letter, titled "I dream of open, humble communities full of hope" Bp. Derio Olivero of Pinerolo diocese justifies his delay in reopening churches: "We must not go back to the former church. Either we start to change the church in these months or it will remain unchanged for the next 20 years."

"I dream of Christians who love non-practitioners, agnostics, atheists, believers of other confessions and other religions. This is the true Christian," Bp. Olivero writes, adding:

Catholics who would like churches opened sooner rather than waiting longer should recognize that "[i]n reality, everyone's life is telling us to think about more urgent things" like the pain of bereavement, joblessness, poverty, shut businesses, closed schools, economic recovery and parents who have to stay home to care for children, Olivero observes.

Indeed, as in the case of the bishop of Pinerolo, if a priest does not prove that he cares for the poor and the 'least,' the Masses remain closed indefinitely. An order that smacks of blackmail!

"To open or not to open the churches, that is not the question for the bishop of Pinerolo: he is telling us there are more urgent matters such as the grief of the bereaved and the economic crisis we must attend to first," a furious Catholic educator from Northern Italy told Church Militant. "With all this insistence on relationships, is the bishop telling us off for not being open enough? Maybe we don't deserve Mass yet?"

"But the most worrying thing is that Bishop Olivero wants to create a new church. The usual new commandments follow: thou shall built a new society; love and respect Mother Earth, love those who are different, especially those who belong to other religions or to no religions at all," the academic lamented, slamming the bishop for his parody of Martin Luther King's "I have a dream" speech.

In his letter, Bp. Olivero refuses to consider the "period of pandemic" as "a simple parenthesis." He notes: "Many think: 'This parenthesis opened at the beginning of March, it will close and we will return to the society and the Church of before.' No. It's a blasphemy, a naivete, a madness. This time speaks, speaks to us. This time screams. It suggests that we change. The society behind us was not the 'best of possible societies.'"

Meanwhile, Bp. Egidio Miragoli of Mondovì has confirmed that liturgical celebrations with the faithful in his diocese will not resume until May 25 as he finds it "better to wait a few more days, in order to prepare ourselves better, spiritually and technically, for a gradual resumption of the celebrations."

The bishop has made an exception for Mass at the Sanctuary of Vicoforte, on May 24 May, the anniversary of the Ascension and the traditional pilgrimage in the region.

Bishop Antonio De Luca of the diocese of Teggiano-Policastro has said he will wait "for the meeting of the Episcopal Conference of Campania convened by the president, Cdl. Crescenzio Sepe for May 19 and follow the decisions of the Presbyteral Council of the Diocese of Teggiano Policastro."

"At the moment each solution must be thought in harmony with the other bishops of the region," before the diocese considers resuming public worship, he noted.

"It seems clear enough by now that in Italy there is not only a problem of a government which, through its 'committee of experts' has imposed the closure of the Masses, but there is an Episcopal Conference that is in complete agreement. It even seems to go beyond the same government directives in a restrictive sense," Prof. Gulisano, former professor of History of Medicine at the University of Milan-Bicocca, told Church Militant.

But the most worrying thing is that Bishop Olivero wants to create a new church.

"The Italian Episcopal Conference wants to be more realistic than the king, wants to roll over to please the state, and to even go beyond it in 'zeal,' he remarked. "All while the epidemic curve is falling sharply, and while most of the productive and commercial activities reopen, with people returning to fill bars, shops and streets, but not churches."

"A Church full of unjustified fear, or perhaps looking for a consensus of a political party? In any case, the religious life of the country pays the price," Dr. Gulisano lamented.

Church Militant earlier reported that Bp. Olivero had cancelled the recitation of the Nicene Creed to avoid non-Catholics during Holy Mass on the feast of the Epiphany.

Earlier commentator Andrea Zambrano castigated the bishops for "blackmail," writing in La Nuova Bussola Quotidiana: "Not only is the church in our country increasingly becoming a state church, like the Anglican Church, but now even priests and parishioners who do not fully adhere to the diktat of 'mercy' are being blackmailed: either you phone and forge human relationships or I won't let you say Mass."

"Obviously it is a threat, a blackmail that has never been seen in the history of the Church because the priest's duty to celebrate Holy Mass goes beyond the poor miseries of individual priests in exercising charity," observes Zambrano.