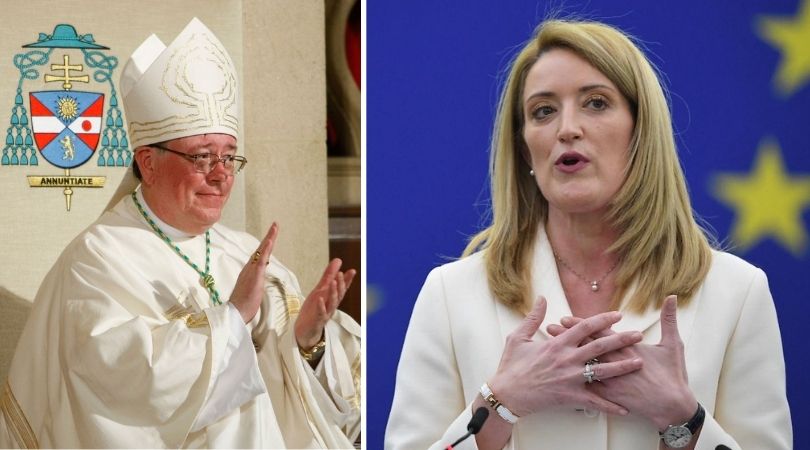 The youngest woman ever to head the E.U. Parliament is described, in a report by the Open Society European Policy Institute of left-wing philanthropist George Soros, as having "very progressive views."

On Tuesday, Metsola won 458 of 690 votes cast, gaining the support of socialists and Democrats, and beating rivals from the Greens, radical Left and conservative nationalists.

"In Malta, she used to say she was anti-abortion, while, in Brussels, during her tenure as a European MEP [member of Parliament], she stated she was in favor of so-called full reproductive rights of women," Beattie, an economist at the University of Malta, noted.

She has fooled Maltese Catholics in the past.

"While it is true that she had voted against abortion on certain occasions in the European Parliament, the fact that she now embraces the E.U. Parliament's pro-abortion stance clearly delineates her as a person lacking principles and Christian values," Beattie explained.

Journalists asked the newly elected Metsola if she would clarify the confusion surrounding her position on abortion, as some French members of the European Parliament had voiced qualms about Metsola's anti-abortion stance.

The 43-year-old categorically stated: "My position is that of the European Parliament. And, on this issue, this European Parliament — on all sexual and reproductive health rights — it has been unambiguous; it has repeatedly called for these rights to be better protected."

Metsola also said she had recently delivered a resolution condemning Poland's anti-abortion law: "I promoted it and I presented it. ... That is exactly what I will do with all the positions that were taken in all this area in all the member states."

The Soros propagandists consider her to be an ally in terms of their globalist, anti-Christian agenda.

In her inaugural address, the mother of four boys twice emphasized her support for abortion, sodomy and transgenderism, insisting that the European Parliament would never accept those "who see women as a target and who deny the rights to our LGBTIQ citizens."

The Soros-funded report titled "Reliable Allies in the European Parliament (2014–2019)" listed Metsola as an ally who is "very keen on migration issues" as well as "asylum, gender equality, LGBTI rights and the rights of all minorities."

"It should consequently come as no surprise that Metsola has been a regular apologist for unrestricted Islamic mass disordered immigration into Europe," Beattie remarked.

"Her election is another step in the Euro-federalist plan to obliterate the remaining vestiges of national sovereignty within E.U. member states," he warned.

Beattie also pointed out that "the Soros propagandists consider her to be an ally in terms of their globalist, anti-Christian agenda," even though Metsola has denied any connection to far-left agitator George Soros (whose goal is to subvert Western civilization).

Cardinal Jean-Claude Hollerich, archbishop of Luxembourg and president of the Commission of the Bishops' Conferences of the European Union ("COMECE"), congratulated Metsola on behalf of the E.U. bishops, saying he looked forward to collaborating with Metsola "for the common good."

"We have already had the opportunity to work with her, and we recognize her qualities: She is a brilliant person who will certainly be able to perform this important institutional role in an excellent way," Hollerich said in a press statement.

Her persistent pro-LGBT stances in the past are in clear violation of Catholic teaching.

Ignoring Metsola's defiance of Catholic moral teaching, Hollerich affirmed the new president for "promoting policies centered on the human person, on the family and on the community."

Bishop Joseph Galea-Curmi, auxiliary bishop of Malta and delegate of the Bishops' Conference of Malta for COMECE praised Metsola on Vatican Radio, claiming she could "inspire a big consensus across Europe's political divide."

"I would like to congratulate Roberta Metsola, wish her the very best and tell her that we — as Malteses — are proud she is president of the European Parliament and that we will continue to promote the European values and give our contribution," the bishop added.

But Beattie told Church Militant that Metsola's "so-called advocacy of the rule of law has made her an enemy of two European countries desperately trying to cling to their traditional and historic Christian European identity — namely Hungary and Poland."

"Her speech in the E.U. Parliament in September 2020, attacking Poland over the issue of the appointment of judges, masked a real hatred of those countries which are trying to defend their Christian heritage," Beattie lamented.

"Additionally, her persistent pro-LGBT stances in the past are in clear violation of Catholic teaching on the issue of homosexuality," Beattie observed. "In this respect, she is a typical 'Christian democrat,' i.e., a liberal-progressivist with a veneer of social Catholicism."

She is a liberal-progressivist with a veneer of social Catholicism

In October, firebrand Maltese cleric Fr. David Muscat explained in a YouTube video how Metsola "unleash[ed] a vicious attack on Poland and on Polish Catholics."

While Metsola's party is "neither nationalist nor Catholic anymore," she "has fooled Maltese Catholics in the past and has been consistently elected by several thousand Catholic voters to the European Parliament," Muscat warned.

Church Militant contacted COMECE, asking why the bishops were so enthusiastic in support of a Catholic president who so clearly and publicly repudiates Catholic teaching, but received no response as of press time.