Bishops Remain Silent in the Face of Cdl. Wuerl’s Deceit 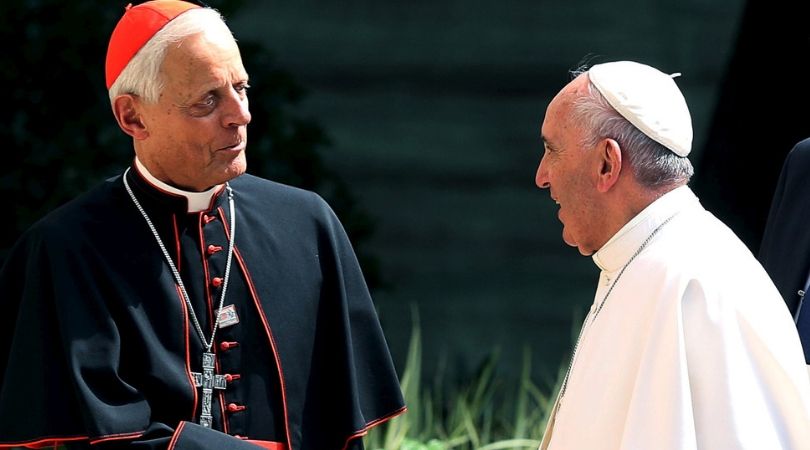 Will the U.S. bishops issue a formal censure of Cdl. Donald Wuerl for lying about his knowledge of Theodore McCarrick's conduct and the restrictions imposed on him?

This is the question Church Militant posed to U.S. Conference of Catholic Bishops (USCCB) Public Affairs Director Judy Keane, as the bishops convened this week in Baltimore for their biannual meeting.

There are 441 active and retired Catholic bishops in the United States, and to date none have come forward to decry the blatant lies and cover-up of Cardinal Donald Wuerl regarding the corrupt and evil deeds of laicized Theodore McCarrick.

This organization exists in order to exist. No higher mission. God is an afterthought.

It's been one year since Abp. Carlo Maria Viganò let loose the stunning revelations about the corruption and cover-up and how Pope Francis and Wuerl long knew of McCarrick’s abuse.

Monsignor Anthony Figueiredo's recently published correspondence documents, which have been vetted for their authenticity by lawyers and journalists, corroborate Viganò's letters and prove that Wuerl knew about penalties imposed on homosexual predator McCarrick.

Even after Figueiredo's testimony, not a peep has been heard from the shepherds.

"In the face of Msgr. Figueiredo's recent revelations, it's absolutely staggering that not a single bishop in the U.S. has come forward to demand answers of Cdl. Wuerl," said Michael Hichborn, president of The Lepanto Institute, in comments to Church Militant.

John Zmirak, senior editor of The Stream, told Church Militant, "This organization exists in order to exist. No higher mission. God is an afterthought."

Speaking as a whole, the religion of the U.S. bishops is ... the U.S. bishops. From their advocacy of de facto open borders — from which they profit, earning 40% of their 2018 income from federal contracts, largely to "serve" immigrants — to their silence on pro-abortion and infanticide Democratic politicians, the pattern is clear.

Indeed, patterns of corrupt and deceitful behavior, or what Zmirak calls "a comprehensive failure and moral disgrace," are becoming easier to read. They can be read in the dwindling numbers of Mass attendees, decreased donations and tithes and the loss of faith in their Church.

"How can the laity be asked to have faith in their bishops if they won't even hold each other to account in the face of such scandals?" Hichborn asked.

Viganò's description of the elite circle of bishops as the "corrupt mafia" who are "bound together not by shared sexual intimacy but by a shared interest in protecting and advancing one another professionally and in sabotaging every effort to reform the sexual corruption" makes a formal acknowledgement of Wuerl's — and perhaps their own — complicity in the cover-ups and the lie that they did not know of McCarrick's chronic licentious behavior.

"We see this bishops' devout self-service most dramatically, of course, on sex abuse," said Zmirak. "Here's a group which in 2002 established a hard-line policy on sex abuse — arguably, an unfair one, since a single 'credible accusation' by a disgruntled parishioner can destroy an innocent priest's life."

"But they exempted their own ranks from consequences for cover-ups," he continued. "And we know why. The Dallas Morning News reported at the time that two-thirds of those bishops had shuffled and covered for sex abusers. And who among their ranks proposed the exemption? The molester of a boy he'd baptized as a baby, then-Cardinal McCarrick."

As of this hour, no formal acknowledgment from any bishop has been offered to the faithful, no confession of guilt for Wuerl's deception.

As of this hour, no formal acknowledgment from any bishop has been offered to the faithful, no confession of guilt for Wuerl's deception.

"Remember watching Cardinal Wuerl and serial plagiarist Fr. Thomas Rosica on video assuring the laity that there was 'no big crisis' over the former archbishop of our nation's capital, even though Wuerl at least already knew about McCarrick's abuse?" Zmirak asked.

"Now we have proof, documentary proof, that Wuerl was lying about the Church sanctions Pope Benedict XVI placed on McCarrick," he added.

Pope Francis and his sycophants have continued to dismiss Viganò's accusations against McCarrick and continued to cover them up. Recall, in a homily after Viganò's first testimony, the Pope called for prayers to protect the Church from "attacks by the devil" — a thinly veiled jab at Viganò.

The Catholic faithful are looking and watching, and every day that passes, confidence in the Church erodes. Yet here we are today — almost exactly one year to the day that the McCarrick revelations became public, followed months later by Viganò's first testimony — and we are plunged more deeply in the dark than ever, the bishops seeming to ignore the widespread frustration and outrage of Catholics who long for truth. The Church and her faithful Catholics are suffering.

As of this writing, Church Militant has received no response from USCCB.