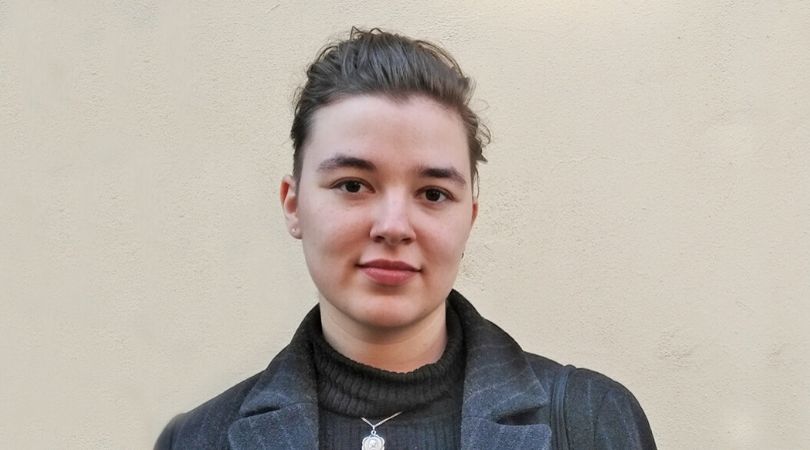 FRANKFURT, Germany (ChurchMilitant.com) - Dramatically defying Pope Francis' conservative stance on gender ideology, the German bishops have caused a sensation by inviting a person identifying as "non-binary" to address the opening assembly of the controversial "Synodal Path."

But the politically correct attempt at including a gender non-conforming speaker backfired on the bishops.

Mara Klein, who began her brief speech by identifying herself as "non-heterosexual" and "non-binary," almost immediately lashed out at the bishops, labeling them "an association of perpetrators" of sexual abuse in the Church.

"I hope we feel uncomfortable. We have every reason to be," the 23-year-old woman from the diocese of Magdeburg told the 230 delegates meeting on the first day of the synod in Frankfurt on Jan. 31.

"As a young person in our Church, I feel uncomfortable standing here and knowing all those in the structure has caused the results, which the MHG study only emphasized again, are gathered around me," Klein said, referring to a 2014–2018 study by academics at the universities of Mannheim, Heidelberg and Gießenby which found that 3,677 children and juveniles fell victim to sexual abuse perpetrated by 1,670 clerics between 1946 and 2014.

"I am against a polarization of clergy and laity, but I want to emphasize that we are dealing here with a massive structural sin. Show us that you can break out of it. I'm still standing here, and it's hard for me, because I believe that we can break out of it," she said.

The official German bishops' website ... has recognized Klein as 'non-binary' and complies with the 'pan-sexual' code of speech.

The official German bishops' website, www.katholisch.de, has recognized Klein as "non-binary" (divers) and complies with the "pan-sexual" code of speech by attaching the German "gender asterisk" (genderstern) to all "their" personal pronouns.

Gender ideologues find it torturous attempting to adapt German to the new linguistic demands of people who self-identify as neither male nor female because unlike English, every noun in German has a gender. Further, in German, adjectives have to agree in gender, number and case with the nouns they modify.

One way they acknowledge the "gender" of a person who chooses to identify neither as male or female is to use an asterisk next to the person's pronoun.

Katholisch.de extolled Klein's address as "one of the most noticed contributions at the first meeting of the Synodal Way" and featured an extended interview with her a week after the synod meeting.

Some bishops "shook hands afterwards and thanked me for the contribution. I found the conversations I had with bishops to be enriching," Klein told the site.

"I hope that we will be able to show that the will to make necessary changes within the Church has been there for a long time, that it is strong and that it is justified," she added.

Konradsblatt, the Catholic newspaper for Freiburg diocese, lauded the inclusion of a "non-binary" speaker arguing that "Catholic stands for 'all-encompassing.'"

[These] three days in Frankfurt demonstrated in their own way how comprehensive the life of the Catholic Church in Germany is. It is a novelty that the cardinal and the nun, the pastor and the business consultant, the theology professor and the 'non-heterosexual,' all sit side by side in one room, fear for the future of the Church and search for solutions for the future."

"She* [Klein] was appointed by the Central Committee of German Catholics (ZdK) and belongs to the 15-member group of under 30s participating in the synod," the publication reported, also using the "gender asterisk" after every pronoun.

We cannot simply think of the Church in modern, democratic, republican categories.

Meanwhile, faithful Catholics have been scandalized by the rejection of Catholic tradition and order at the synod. Archbishop of Cologne, Cdl. Rainer Maria Woelki warned that the synod would "effectively implement a Protestant Church Parliament" and the first day of the assembly had demonstrated that "the ecclesiological foundations of the Church are no longer relevant."

Woelki and a small group of supporters tried to enforce a blocking minority at the level of the working groups. This initiative was rejected by a majority of 87%.

Woelki explained why the stampede towards the democratization of the Church is not Catholic:

As a bishop, I have a different ordination, a different authority, which places me in the tradition of the Apostles and assigns me to the Church as a whole to be responsible for the leadership and sanctification of the Church. In this respect, we cannot simply think of the Church in modern, democratic, republican categories. The Church is indeed "sui generis."

Synod reports, however, boasted about how the assembly had uniquely succeeded in overturning the order of the traditional Catholic hierarchy.

In the plenary assembly, seating arrangements were decided on the basis of the alphabetical order of a person's name and not on their rank.

Members were assigned to the executive committee according to the norms of gender equality. Women were seated alongside the bishops throughout the assembly.

It was also ruled that a synodal decision would only be accepted if a majority of the participating women approved it.

When entering Frankfurt Cathedral for the opening service, the bishops entered in procession together with the laity, including women with posters demanding "equal rights, equal dignity." The bishops wore black suits with white clerical shirts or clerical collars making them virtually indistinguishable from the priests.

The synod was also careful to achieve a balance between women and men and East and West Germans.

Bishop Rudolf Voderholzer of Regensburg was photographed receiving Communion from a teenage girl.

Archbishop of Hamburg Stefan Hesse said that the language of the Catechism of the Catholic Church on homosexuality looks down on gay people, instead of meeting them at eye level, with its description of homosexual acts and inclinations as "intrinsically ... [and] objectively disordered" (CCC 2357–2358).

Bishop Georg Bätzing of Limburg diocese observed that the Church's sexual teaching is seen more as a series of prohibitions than as a guide to living. "We want to bridge this gap without a break with [Church] teaching, but by widening, opening and changing this teaching," he commented.

The Synodal Path working document on Catholic sexual morality acknowledges that "homosexual acts also realize positive meaningful values, insofar as they are an expression of friendship, reliability, loyalty and support in life."

The next synodal assembly will take place in Frankfurt Sept. 3–5 and will continue discussions in the four forums of the reform debate — on power, priestly existence, sexual morality and the role of women.