WASHINGTON (ChurchMilitant.com) - Donations to the leftist Black Lives Matter movement and related organizations have skyrocketed in response to the killing of George Floyd, a felon who died during his arrest on May 25 while in the custody of Minneapolis police.

Protests over Floyd's death have been marred by arson, looting, and civil disturbances in Minneapolis and other major cities.

Yet that hasn't hampered the movement — whose supporters have been visible at the scene of the destruction — from raking in financial support.

According to data collected by Creative Investment Research cited by Black Enterprise, various corporations have pledged more than $1 billion to the Black Lives Matter movement.

These philanthropic institutions work in concert with "allies," such as the Hill-Snowdon Foundation, Solidaire, the NoVo Foundation, the Association of Black Foundation Executives, the Neighborhood Funders Group–Funders for Justice, anonymous donors and many more.

Who Is This Coalition?

Shepherded in 2013 by three radical activists, the broad Black Lives Matter movement achieved visibility in the United States in the wake of the killing of Florida black teen Trayvon Martin at the hands of local resident George Zimmerman.

The movement's protests escalated after Zimmerman was acquitted of the killing that civil rights advocates and black activists claimed was the result of racial discrimination and a climate of police brutality directed at black people. The movement, in turn, has been cited for alleged indifference to violence committed in its name and for creating a dangerous environment for police.

There has been debate ever since over the identity of Black Lives Matter. Originating as the #BlackLivesMatter hashtag on Twitter, the Black Lives Matter movement has been described as an amorphous and decentralized collection of related racial justice groups with a radical agenda.

Patrisse Cullors, one of the originating activists, has said that its "organizing is often spontaneous and not directed by one person or group of people." The groups associated with the movement are numerous and range from protest groups with little interest in backing candidates to those that pressure candidates and elected officials to adopt their policies.

On the other hand, the Black Lives Matter Global Network Foundation, Inc. (BLM) is a structured nonprofit organization with 15 chapters nationwide. On the BLM website, potential donors click through to a secure donation form managed by ActBlue Charities, a pass-through organization that also funds Democratic party campaigns and progressive political groups, including pro-abortion NARAL, throughout the United States. The website states that donations "benefit the Black Lives Matter Global Network."

We believe and understand that black people will never achieve liberation under the current global racialized capitalist system.

On its website, ActBlue presents as "a registered charitable organization formed to democratize charitable giving." Among the candidates who have used the service are Joseph Biden and Sen. Bernie Sanders. ActBlue provides services, including data analytics, to help fundraising efforts. ActBlue defines itself as "a nonprofit tech organization that builds digital fundraising tools for Democratic candidates and committees, progressive organizations and other nonprofits."

The website boasts that it has raised over $5.2 billion since 2004. It claims to offer a fundraising platform to like-minded candidates and organizations for garnering support from small-dollar donors. It charges recipients a fee of 3.95% for the service, but also stipulates that any donations that are unclaimed for more than 60 days or rejected by an organization "will be redesignated as a contribution to ActBlue." According to ActBlue, those funds are destined "generally to support its social welfare activities," the organization states.

While the Black Lives Matter donation page managed by ActBlue states that inquirers can get the fundraising organization's "latest financial report," requests by some media for the report were rejected. ActBlue has not provided the requested report. Neither the ActBlue nor the BlackLivesMatter website indicate how much has been directed to the latter group.

However, the ActBlue website shows apparent fundraising success. For April 2020, it showed an increase of $4.4 million total contributions for that month — three times the amount earned in April 2018. In money terms, it means that ActBlue processed about $141 million in April, up from just under $56 million in April 2018. The dollar amount does not reflect the uptick in donations to Black Lives Matter, which have surged since late May.

What The Coalition Says It Wants

Formed in 2014, with ties to the Ford Foundation and the Borealis Philanthropy, M4BL brought together over 150 like-minded organizations, including the Black Lives Matter Network and the National Conference of Black Lawyers, and has earned endorsement from groups such as Color of Change.

A recent report ... explains how $32 billion in Soros' money is creating a 'post-democratic and supranational' global authority with a network of judges who function as 'new clerics' of a universal, secular 'religion.'

M4BL describes itself as: "[a]n ecosystem of individuals and organizations creating a shared vision and policy agenda to win rights, recognition and resources for black people," that is calling for the abolishment and replacement of "prisons, police and all other institutions that inflict violence on black people."

While it centers on the "most marginalized black people," it also offers a platform for persons who identify as "trans and queer, women and femmes, currently and formerly incarcerated, immigrants, disabled, working class and poor."

It seeks a "radical realignment of power," globally, while it is expressly "anti-capitalist." Its website states further: "We believe and understand that black people will never achieve liberation under the current global racialized capitalist system."

Church Militant has reported on how money from various organizations tied to billionaire globalist George Soros — a supporter of the social justice movements including Black Lives Matter — is creating a "move toward a global governance."

A recent report by the European Center for Law and Justice explains how $32 billion in Soros' money is creating a "post-democratic and supranational" global authority with a network of judges who function as "new clerics" of a universal, secular "religion."

On June 19, M4BL plans to rally at the White House and elsewhere in the country. According to M4BL, it hopes to mobilize thousands for a weekend of marches and other actions to push its agenda: "defunding the police, investing in black communities and the resignation of President Donald Trump."

Often called Juneteenth, the unofficial holiday commemorates June 19, 1965, when a United States general announced orders in Texas that all previously enslaved people were emancipated. Typically, it is marked by parades, picnics and barbecues. 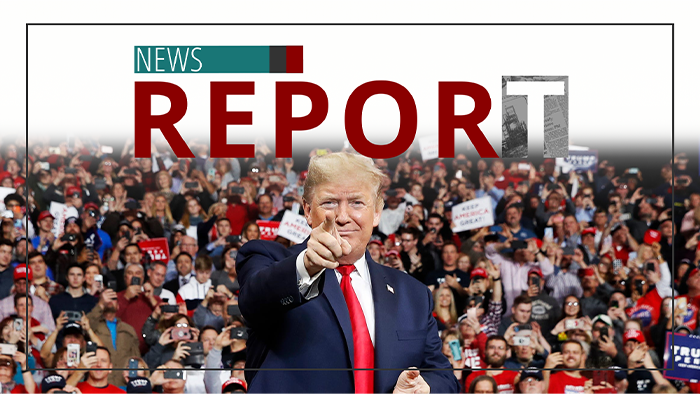