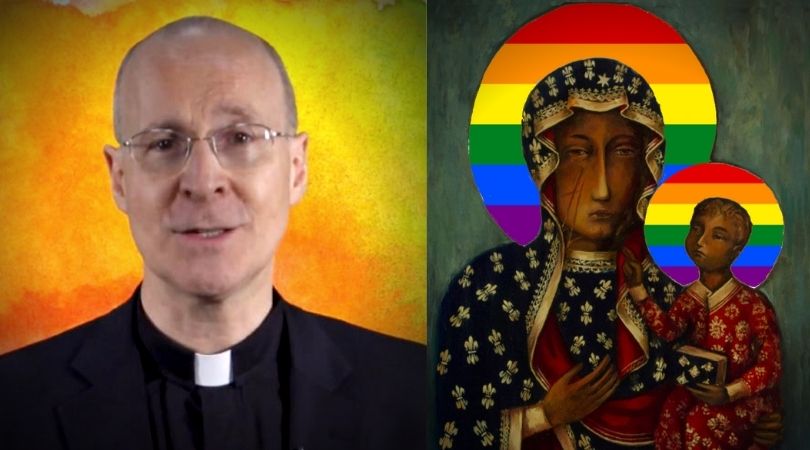 PŁOCK, Poland (ChurchMilitant.com) - The U.S.-based homosexualist Jesuit James Martin is meddling in the affairs of the Polish government and Catholic Church.

Father Martin is endorsing the blasphemous defacing of the image of Our Lady of Częstochowa, also known as the Black Madonna, the most venerated icon of the Polish people, in a recent tweet.

The LGBT community has few images like this. So it is not surprising that they would add their own symbol, the rainbow, in a respectful way, to a beloved image of their mother.

How appropriate that she is weeping, for it is her son who suffers whenever an LGBT person is persecuted pic.twitter.com/BlpYTMMBp8

Martin's endorsement came in response to the ongoing trial of three leftist activists for making and displaying posters of the Virgin Mary and Child with rainbow halos in 2019. Their act is considered offensive by many Poles — and offending religious feeling is a crime under the Polish penal code.

The Jesuit condoned the marring of the icon that traces back 600 years, with many believing St. Luke painted it on a tabletop from the house of the Holy Family.

The three women on trial — Elżbieta Podleśna, Anna Prus and Joanna Gzyra-Iskandar — put up posters of the Virgin Mary and the Child Jesus with rainbow halos in protest of a traditional Easter display at St. Dominic's Church in Płock, some 110 kilometers northwest of Warsaw, in April 2019.

Government officials alleged at the time — and continue to do so — that the image of the Virgin Mary and the Child Jesus with rainbow halos is blasphemous and anti-Christian. They object to linking the sacred image to LGBT ideology.

Crowds of mainly young people have gathered outside the Płock courtroom to support Podleśna, Prus and Gzyra-Iskandar, shouting slogans like "A secular, not Catholic Poland!" and "The rainbow does not offend!" according to a Catholic News Agency (CNA) article published on Jan. 18.

But many do not support the defendants or their views which run counter to Polish law and tradition.

According to the CNA, Ordo Iuris Institute director Karolina Pawłowska said she was confident that the trial had a sound basis in Polish law.

"The image that is the subject of this case ... I think it's one of the cases that fulfills all premises of profanation, which is defined in the Polish criminal code in article 196," she told CNA.

The Catholic Church to which Fr. Martin belongs is opposed to homosexuality.

The director further told CNA: "It is clear, especially when you take into consideration the Polish cultural circle, which is very much focused on and built upon Catholic ethics and values which are very important to Polish people."

The Catholic Church to which Fr. Martin belongs is opposed to homosexuality.

The Catechism of the Catholic Church in section 2357 teaches that Sacred Scripture "presents homosexual acts as acts of grave depravity" and that Sacred Tradition "has always declared 'homosexual acts are intrinsically disordered.'" It adds, "They are contrary to the natural law. ... Under no circumstances can they be approved." Intrinsically disordered means they're not in accord with how God designed nature to work.

Saint Paul likewise condemns sexual sins including homosexuality. In 1 Corinthians 6:9–10, he declares, "[N]either fornicators, nor idolaters, nor adulterers, nor the effeminate, nor liers with mankind ... shall possess the kingdom of God."

Reactions to Martin's tweet were varied. Many objected to his anti-Catholic stance. For example, Samuel Willodson, Catholic convert, tweeted: "If the symbol of prideful sodomy plastered behind the heads of the Son of God and the Blessed Virgin is 'respectful,' what does disrespectful look like?"

Poles both living and dead have looked to Our Lady of Częstochowa — not just the icon but the person the icon represents — to guide and protect them in hours of personal and national need.

If the symbol of prideful sodomy plastered behind the heads of the Son of God and the Blessed Virgin is 'respectful,' what does disrespectful look like?

Many Poles believe that the existence of Poland itself — after invasions, plagues, even eradications from the map of Europe  — is attributable to their Black Madonna, whose sacred icon rests in the holy crevices of the Tatra mountains in southern Poland.