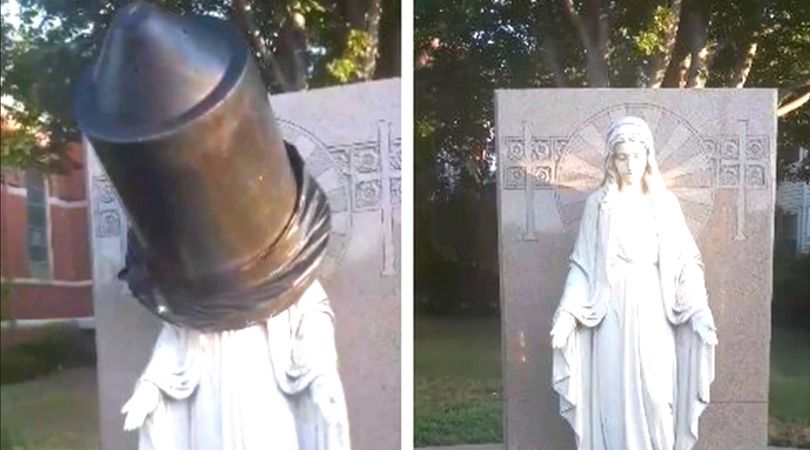 Another desecration in Dorchester

BOSTON (ChurchMilitant.com) - A statue of the Blessed Virgin Mary outside a Boston church has been desecrated — for the second time.

On July 11, the pristine white statue of the Mother of God standing outside St. Teresa of Calcutta Parish in the Dorchester neighborhood of Boston was vandalized. It happened again July 16. The criminal has yet to be caught.

C.J. Doyle, the executive director of the Catholic Action League of Massachusetts, is understandably dismayed at the repeated violence to Catholic property.

"I think that's really a very deliberate, calculated and mean-spirited and sacrilegious expression of contempt for Our Lady, for the Catholic faith and frankly for the Catholics in Boston," declared Doyle.

Doyle informed Church Militant that during the same overnight period of July 11–12, when a statue of the Blessed Virgin Mary was scorched by arson at St. Peter's Parish in Dorchester, the statue of Mary at St. Teresa was also desecrated only a mile away.

An unidentified person entered the grounds of St. Teresa of Calcutta Parish in Dorchester and emptied the contents of a trash barrel onto a church walkway. He proceeded to place the barrel over the head of the statue of the Virgin Mary.

He proceeded to place the barrel over the head of the statue of the Virgin Mary.

"Officers spoke with members of Boston Fire Department Fire Investigation Unit, who stated that an unknown suspect had set fire to plastic flowers, which were in the hands of the statue, causing the face and upper body of the statue to be burned," the police stated.

Four days later the incident was repeated, Doyle informed Church Militant. In the early morning of July 16, a passerby discovered the same barrel over the head of the same statue at Saint Teresa's church. Although located at one of the busiest intersections in Boston, the corner of Columbia Road and Dorchester Avenue, there were no eyewitnesses to the crime.

Paul McGrath, a Dorchester resident, was the first to discover it and notify the parish priest on both occasions. He noticed the same barrel over the head of the same statue on July 16, with trash all over the ground. After notifying the parish priest, he recorded a video of his discovery and posted it on social media. He had some choice words for the perpetrator:

This is the second time, in four days, that I've driven by and saw this. At least the lunatic/lunatics didn't light the statue on fire like they did at Saint Peter's. There is a surveillance camera no more than 50 ft. from this statue. I hope that the authorities seriously look into this matter and approach the individual/individuals to explain that their actions go against any and all arguments that they may have against peace, love and understanding.

The Catholic Action League is calling upon the Boston police to undertake a hate crime investigation into these two incidents.

Catholic churches and religious iconography are being deliberately targeted for culturecide.

This new spurt of incidents desecrating holy images across the country is not new to the Boston area. A statue of Mary at St. Gregory's Church in Dorchester was vandalized four times in 2019. That same year, a statue of our Lord at St. Mark's in Dorchester was smashed to pieces. Further, in 2016, statues of the Virgin Mary were decapitated at St. Margaret's in Burlington and St. Mary's in Billerica, while another was defaced at St. Catherine of Siena Parish in Norwood.

Doyle sent Church Militant this statement on the Catholic Action League's stand, which in no uncertain terms demands justice from the area's politicians:

It is becoming increasingly clear that these crimes can no longer be treated as a collection of random incidents perpetrated in isolation by disturbed individuals. The number, timing and frequency of these attacks strongly suggest that Catholic churches and religious iconography are being deliberately targeted for culturecide by the same left-wing extremists who are committing mayhem against public monuments across the country.

These incidents are chilling assaults against the First Amendment. The first religious freedom right is the right of churches to exist and to be unmolested in their persons and property. Public authorities, most especially Gov. Charlie Baker, Attorney General Maura Healey and [Boston] Mayor Marty Walsh, must respond vigorously and forcefully.

Doyle warned what would happen if law enforcement refused to do its job.

"They must condemn these attacks and must use all of the resources of their offices to identify, arrest, prosecute and incarcerate the offenders. If they do not, these crimes will just continue," he said.