BUCKINGHAM PALACE, England (ChurchMilitant.com) - Black Lives Matter (BLM) zealots are facing strong backlash from Britons of different ethnicities and faiths after calling for the "racist image" of St. Michael crushing the Devil to be erased from one of Britain's highest honors.

Tracy Reeve, a white textile artist, launched a Change.org petition to the British parliament claiming that the artwork on the badge of the Order of St. Michael and St. George is of a "white-skinned angel" standing "on the head/neck of a black-skinned devil."

Manchester-born Reeve, who lives in a seaside Yorkshire town, asserted that the "highly offensive image" is "reminiscent of the recent murder of George Floyd by the white policeman in the same manner presented here in this medal."

The British order of chivalry, founded in 1818 under King George III, is awarded to ambassadors, diplomats and senior Foreign Office officials who have served abroad in a non-military capacity and is personally bestowed by the Queen. Encircling the image is the Latin motto Auspicium melioris ævi (Hope of a better age).

"Equating the triumph of St. Michael over Satan to an event in modern-day America is either the product of severe ignorance or a deliberate provocation as the BLM movement and its sympathizers try to see how far they can go," eminent politician and former Member of Parliament Ann Widdecombe told Church Militant.

"Given their success so far with cowed and compliant councils, universities and other organizations, one can hardly blame them for trying! They probably cannot believe how easy it has been. It is time to take a stand and the Catholic Church is rather good at doing that," Widdecombe, who also served as a Member of the European Parliament, said.

"Vandalism is rife but so was it also in the fifth century when the original Vandals were running amok. Church art must be protected from the mob, both physically and also intellectually. There is nothing in the image of the Archangel conquering Satan for which anyone need apologize," the outspoken convert to Catholicism asserted.

"Equating George Floyd with Satan is a special kind of stupid, self-own from the Left," Muslim-born Raheem Kassam, editor of The National Pulse and a British-Asian author, told Church Militant.

Equating Floyd with Satan is a special kind of stupid, self-own from the Left.

Speaking to Church Militant, black British politician David Kurten said: "It is ridiculous to suggest that images such as that of St. Michael trampling on the neck of the Devil is a symbol of white supremacy, which has anything to do with George Floyd's killing in Minneapolis."

"This is the sort of nonsense which permeates useless university courses such as 'race studies.' If I were mayor of London, I would seek to preserve our heritage and stop encouraging the cultural vandals who want to erase it," Kurten stressed.

Associate editor of The Spectator Damian Thompson blasted the race-baiting petition for managing "to find an image that does, indeed, look a bit like someone stomping on a black man."

"That's not what it depicts, but congratulations — they've made quite a clever discovery in their campaign to exacerbate racial tension by encouraging everyone to take offense at everything," Thompson, former editor-in-chief of the Catholic Herald, told Church Militant.

"That's their job. They work in what's been called the 'race relations industry,' which long ago ceased to distinguish between real and imaginary racism," he remarked.

But Sir Simon Woolley, director of Operation Black Vote, told The Guardian that though the original picture may have represented St. Michael slaying Satan, the figure on the medal "has no horns or tail and is clearly a black man."

"It is not a demon. It is a black man in chains with a white, blue-eyed figure standing on his neck," Nigerian British activist singer Bumi Thomas insisted.

However, Joseph Shaw, a fellow of the prestigious Royal Society of Arts, told Church Militant that "St. Michael's triumph over Satan is a biblical image with absolutely no connection to the modern 'scientific racism' which was used to justify slavery and racial oppression in the 18th and 19th centuries. This kind of racism was the product of the Enlightenment."

The claim to represent the oppressed is not a license to oppress and destroy everything one doesn't like or understand.

"Various images of St. Michael and Satan show that some do, and some do not, depict Satan with a darker skin tone than St. Michael. Those which do follow an artistic convention dating back to the Middle Ages which has no connection with interracial conflict," Shaw, an Oxford scholar in medieval philosophy, explained.

"If one searches the Bible for racial attitudes, one finds that an Ethiopian was one of the first non-Jews to be baptized," Shaw observed. "The claim to represent the oppressed is not a license to oppress and destroy everything one doesn't like or understand."

Nevertheless, Reeve's petition "calling for this medal to be completely redesigned in a more appropriate way and for an official apology to be given for the offense it has given" has garnered over 5,000 signatures — from mostly "woke" white malcontents.

Meanwhile, a number of Church of England cathedrals, including Westminster Abbey, Bristol Cathedral and Manchester Cathedral have begun reviewing statues and stained-glass windows that may potentially cause offense to BLM mobs.

All these cathedrals are former Roman Catholic churches that were illegally appropriated by the English state and had their ownership transferred to the newly created Church of England. Many of the churches were subject to the politically correct iconoclasm of the Reformation.

Anglican bishops Christopher Cocksworth of Coventry, John Stroyan of Warwick, Martyn Snow of Leicester and Guli Francis-Dehqani "took the knee" to mark two weeks since the death of George Floyd, after archbishop of Canterbury Justin Welby acknowledged his "white privilege."

Many bishops are incapable of discriminating between genuine grievances and mass hysteria whipped up by far-left ideologues.

Earlier, the Catholic Bishops' Conference of England and Wales praised the "peaceful Black Lives Matter protests taking place in our towns and cities this week," despite the outbreak of BLM-led riots, as Church Militant reported.

"The current generation of bishops, significantly less intelligent than their predecessors, have cheerfully formed an alliance with what is essentially an extremist movement, Black Lives Matter, in a pathetic attempt to attract the nation's attention," Thompson lamented.

"This is partly stupidity — many bishops are incapable of discriminating between genuine grievances and mass hysteria whipped up by far-left ideologues. But others, I suspect, know perfectly well what is going on and are engaged in calculated virtue-signaling," the presenter of the Holy Smoke podcast told Church Militant.

"What they're actually signaling, however, is not virtue but a mixture of cynicism and cowardice," Thompson remarked.

Reeve's petition "is rooted in ignorance and prejudice," Farrow said. "At a time when the economy is floundering, it would be a pointless waste of taxpayers' money to redesign a public service medal which depicts the Christian heritage of this country." 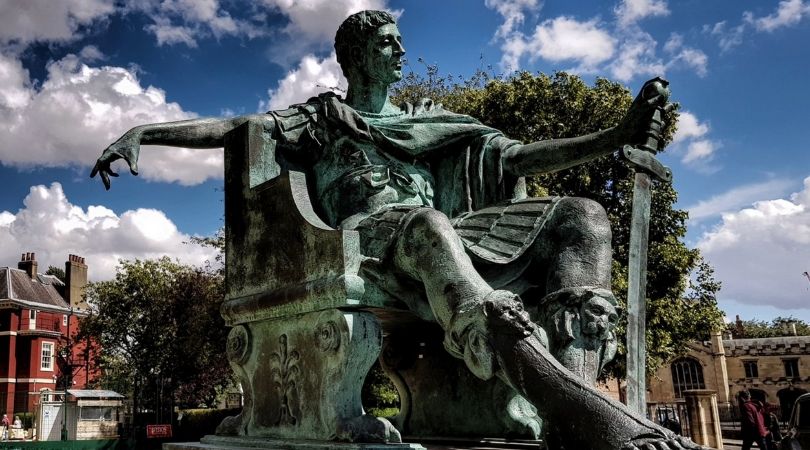