LAHORE, Pakistan (Churchmilitant.com) - Seventy-two Christians were murdered and over 340 injured on Easter Sunday by a suicide bomber in Lahore, Pakistan. More than 30 of the victims were children playing games just before they were killed.

Hundreds of Christian families gathered in a public park to celebrate Easter Sunday when their revelry was cut short as 28-year-old Yousif Farid detonated his ball bearing-packed suicide vest. A witness remarked, "When the blast occurred, the flames were so high they reached above the trees and I saw bodies flying in the air." Most of the victims were women and children.

With so many wounded, the number of the dead has increased since news of the bombing first came out. Hospitals and operating rooms are full, and doctors are trying to keep some of the more seriously wounded alive.

The provincial government has closed all public parks and ordered three days of mourning. Shops were closed and flags are flying at half-staff for the murdered Christians.

Pope Francis commented, "The horrible massacre of dozens of innocent people in Lahore Park casts a pall of sadness and anguish on the Easter holiday. Once again, the cowardly, murderous hatred rages against the most defenseless."

The United States is calling the attack "cowardly," and Iranian president Hassan Rouhani sent the condolences of the Iranian people and condemned the attacks.

A branch of Al Qaeda declared itself responsible for the attack. "We want to send this message to Prime Minister Nawaz Sharif that we have entered Lahore," they said. "He can do what he wants but he won't be able to stop us. Our suicide bombers will continue these attacks. The target was Christians."

There has been a sharp increase in the persecution of Catholics in Pakistan. The archdiocese of Lahore has more than 400,000 Catholics, making up 1.5 percent of the population. In 2004 there were over 570,000 Catholics, but years of increasing persecution have brought the number down to just above 400,000 as of 2013.

Pakistan is a predominantly Muslim country with only a tiny minority of its people being Christian. There are only about 1.5 million Catholics, who are forbidden by law from becoming prime minister or occupying important government positions.

Despite the ban on Catholics in important government positions, the government has formally recognized the work of several Catholics, mostly religious sisters and priests.

Easter violence hasn't just been directed toward Christians. On Thursday in Great Britain, a Muslim shopkeeper, Asad Shah, was murdered. Shah had posted on Facebook, "Good Friday and a very Happy Easter, especially to my beloved Christian nation. ... Let's follow the real footstep of beloved holy Jesus Christ (PBUH) [peace be upon him], and get the real success in both worlds xxxx."

Soon after the posting, Shah was accosted at the newsstand where he worked. He was stabbed and his head was crushed. 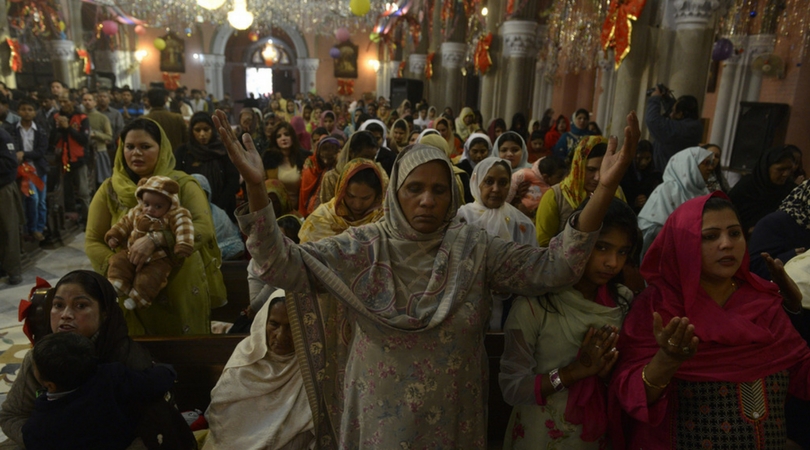