BOSTON (ChurchMilitant.com) - The archdiocese of Boston, Massachusetts is refusing transparency about a priest reportedly removed for homosexual assault.

Boston Catholic Insider reported on Sept. 13 that Fr. Walter Cuenin abruptly left his position as chaplain at Brandeis University in January 2015 ostensibly for reasons of health, but was in fact removed after a male college student claimed the priest got him drunk and sexually molested him.

Cuenin had taken a Brandeis student on a trip to NY City around Christmas-time, staying in a one-bedroom hotel room with one bed. He plied him with alcohol, and then molested him. The victim, who prefers to be unidentified, wanted Fr. Cuenin to leave campus so that other students were no longer vulnerable to similar happenings.

Cuenin was well known as a gay advocate, the Brandeis notice on his departure stating that "Cuenin had recently gained the support of other students on campus by displaying a large gay pride flag in honor of LGBT History Month."

Cuenin has opposed legislation banning same-sex "marriage," has rejected the Catholic language stating that homosexuality is objectively disordered and has invited parishioners to take part in gay pride parades, himself a featured speaker at Boston's gay pride interfaith service.

In 2006, Cuenin resigned in disgrace from Our Lady Help of Christians in Newton after admitting to taking parish money that wasn't his. Cardinal Sean O'Malley then appointed him as chaplain at Brandeis University.

At the time, Catholic blogger Domenico Bettinelli asked, "Should the archbishop be putting an openly heterodox priest back into circulation, especially among 18–22-year-olds who are often already confused about morality and sexuality?"

Father Bryan Parrish, episcopal vicar and secretary for parish life and leadership, confirmed with Carolyn McKinley on Sept. 11 that Cuenin was indeed involved in the molestation, and that he has been placed on "restricted senior status." The Boston archdiocese has since backtracked on further questioning from Church Militant, claiming that Parrish never made such a statement.

"Fr. Parrish did not state that and there was no allegation," Communications Director Terrence Donilon told Church Militant. "It has been our experience with Boston Catholic Insider that the information they distribute is consistently false and misleading as is the case in their September 13, 2018 entry."

Boston Catholic Insider, however, is vouching for the truth of its reporting, accusing Donilon of lying in order to protect Cdl. Sean O'Malley's reputation.

Boston Catholic Insider, however, is vouching for the truth of its reporting, accusing Donilon of lying in order to protect Cdl. Sean O'Malley's reputation.

Church Militant sent a series of follow-up questions to Donilon on Sept. 18:

Although Donilon is usually quick to respond to Church Militant media queries, he has not answered these questions as of press time.

O'Malley has been under scrutiny after The New York Times revealed his office had received a letter in 2015 detailing Abp. Theodore McCarrick's homosexual predation of seminarians, and nothing was done, his secretary claiming that the problem did not fall within O'Malley's purview as head of the Pontifical Commission for the Protection of Minors.

Three months after his office received the letter, O'Malley welcomed McCarrick to a prestigious fundraising gala in Boston that raised more than $2 million for the archdiocese.

O'Malley has since issued a public apology for failing to act, claiming he never personally received the letter and vowing to change policy on such matters in the future.

Renowned sex abuse expert Richard Sipe also claimed that a letter graphically explaining McCarrick's crimes was mailed in 2016 to the Pontifical Council headed by O'Malley. In response to Church Militant's inquiry, Donilon claimed the archdiocese had no record of the letter. Donilon did not answer Church Militant's inquiry whether O'Malley himself received Sipe's letter.

O'Malley abruptly pulled out of a scheduled appearance at the World Meeting of Families in August after announcing he needed to remain in Boston to oversee an investigation into Boston's St. John's Seminary over alleged homosexual misconduct. He was criticized by a former St. John's seminarian of establishing a sham investigation committee, as it included a faculty member — Auxiliary Bishop Mark O'Connell — who was witness to the homosexual misconduct and did nothing in response. O'Connell has since been replaced.

*9/21/2018: This article was updated to reflect new information received on Sept. 21: Fr. Parrish spoke with Carol McKinley, not with Boston Catholic Insider. 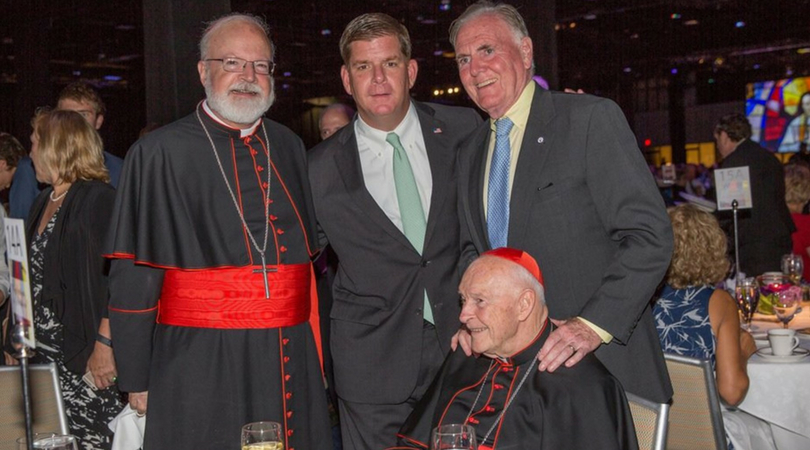