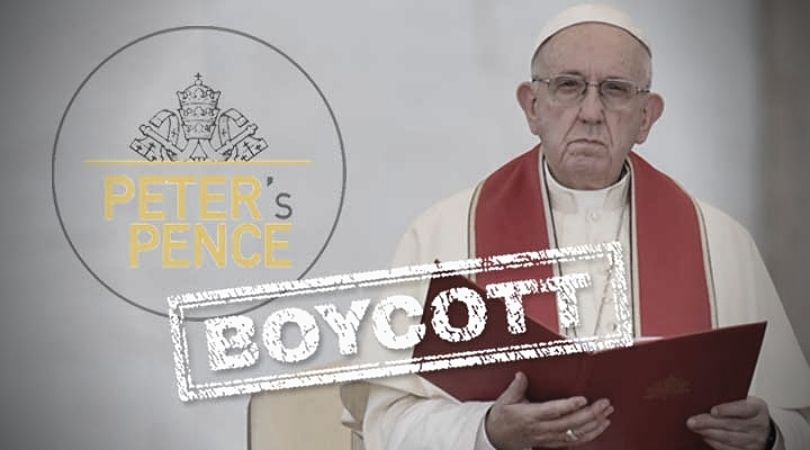 Complicit Clergy (CC), a group of lay Catholics who monitor corruption in the visible Church, are denouncing the U.S. Conference of Catholic Bishops (USCCB) for encouraging the faithful to donate this weekend to Peter's Pence in the wake of scandals surrounding Pope Francis.

"The Peter's Pence collection is a gesture of solidarity through which every member of the faithful can participate in the activity of the Pope as Pastor of the universal Church," states the USCCB on its website. The USCCB then includes a quote from the Vatican's website: "The faithful’s offerings to the Holy Father through the Peter's Pence Collection are destined to Church needs, to humanitarian initiatives and social promotion projects, as well as to the support of the Holy See."

But CC's call for a boycott spotlights that "recent reports have revealed only a fraction of donations — less than 10% — actually goes towards charitable relief services."

In fact, the "vast majority of the funds have been used to close Vatican budget gaps and invest in highly speculative ventures, including Hollywood movies and luxury rental property," continues the CC post. "Adding more fuel to the fire, last week we learned one of the most powerful Cardinals in the Vatican was ousted apparently due to his mishandled millions of dollars in charitable contributions from Peter's Pence."

Recent reports have revealed only a fraction of donations — less than 10% — actually goes towards charitable relief services.

In addition, based on the red flags, CC "strongly recommend[s] faithful Catholics contribute to a more trustworthy charitable cause — consider one of the safe charities listed at Lepanto Institute."

"It's outrageous that the USCCB is moving forward with the Peter's Pence collection this weekend," Hichborn said. "When faithful Catholics give to Peter’s Pence, they expect that the money is going toward the needs of the poor and the Church, not to swanky condos and raunchy movies."

"But this is what we've come to expect from national collections from the USCCB," he continued. "They completely ignore the scandalous nature of those agencies for which they are collecting and move on with business as usual."

Hichborn went on to explain some of LI's work spotlighting the USCCB's refusal to address corruption in organizations that his Institute has exposed.

"How many times has the USCCB ignored the promotion of contraception from Catholic Relief Services, or the promotion of homosexuality and Marxism from the Campaign for Human Development?" he asked rhetorically.

When faithful Catholics give to Peter’s Pence, they expect that the money is going toward the needs of the poor and the Church, not to swanky condos and raunchy movies.

"The simple fact of the matter is that faithful Catholics are fed up," the LI president lamented. "Given what has come out regarding the ongoing scandals at Peter's Pence, it may no longer be a matter of whether Catholics could boycott it, but that they have a moral duty to do so."

A pastor, who requested anonymity, shared with Church Militant a conversation he had with a pastoral associate.

"I just asked the bishop about how to handle Peter's Pence," mentioned the associate. "I'm waiting for a response."

"I put it out of my mind," joked the pastor. "I may think of it again, when we have a different pope and Holy See."

"Ditto that," rejoined the associate. "The current Holy See is not a 'Holy Scene.'"

"Remembering always that money is fungible, nevertheless there have been problems lately with how Peter's Pence has been applied," he recalled after explaining Peter's Pence added philanthropy to its original purpose, namely, raising funds for the Roman Curia's operations.

"Recently, we heard of the dressing-down of Card. Becciu (is he a Cardinal or isn’t he?) for using Peter's Pence by luxury real estate in London and to fund a movie about openly homosexual Elton John," Fr. Z continued. "It is hard to understand either of those moves as 'philanthropic' or as related to the operation of the Roman Curia ... the wholesome operation, that is."

"No, this is very bad indeed," he added. "Speaking personally, I cannot see myself contributing anything to Peter's Pence, no matter how plaintive the plea. I now need some evidence that the right people are handling the money and that it is going to things that can be explained with a straight face."