The 71-year-old bishop of Madison, Wisconsin died at about 9:15 p.m. on Saturday at St. Mary's Hospital in Madison, where he had been hospitalized since Nov. 21 following a "cardiac event," according to a diocesan press release. The heart problem emerged during a planned medical examination.

The press statement notes that Bp. Morlino sought to foster a greater sense of reverence at Mass, to improve both the quality and the quantity of seminarians and to encourage Catholic institutions to greater fidelity.

"All objective indicators point to the fact that Bishop Morlino accomplished what he set out to do in the diocese, by the way of fostering greater priestly vocations (he ordained 40 men to the priesthood, with another 24 presently in formation)," the statement reads, "bringing a greater sense of reverent worship to the entire diocese, and he made significant inroads toward encouraging the Catholic institutions in his care to live out their mission with greater fidelity, during his fifteen-plus years as Bishop of Madison. We pray this continues."

Church Militant spoke with Fr. Richard Heilman about the passing of his bishop, who said, "Bishop Robert C. Morlino was hypervigilant as a shepherd. He saw the wolves encroaching and he was quick to warn his flock."

Father Heilman quoted Ven. Abp. Fulton Sheen's statement: "It is a characteristic of any decaying civilization that the great masses of the people are unconscious of the tragedy."

But the late Bp. Morlino wanted his people to understand what's at stake in the culture. "Bishop Morlino put himself in harm's way to protect his flock from [secular] indoctrination, never considering the cost to himself," he told Church Militant. "This made him a formidable opponent to the cultural elite," who have been pushing an anti-religious, far-left agenda.

Bishop Robert C. Morlino was hypervigilant as a shepherd. He saw the wolves encroaching and he was quick to warn his flock.

Often considered an ally of tradition-minded Catholics, the late bishop voiced support for Abp. Carlo Maria Viganò and called out the homosexual subculture run rampant in the Church. Morlino wrote in a letter to the diocese in August, "It is time to admit that there is a homosexual subculture within the hierarchy of the Catholic Church that is wreaking great devastation in the vineyard of the Lord."

Bishop Morlino faced criticism from pro-LGBT activists last year for diocesan guidelines published in October 2017 that stated that those in public same-sex relationships who showed no signs of repentance before death should not be given a Catholic funeral.

In September 2016, Bp. Morlino announced that he would offer his usual Sunday Pontifical Mass ad orientem from then on. Ad orientem, "toward the east," refers to the priest and servers facing Our Lord in the tabernacle — the same direction as the people in the pews during Mass. It is the way Mass was offered for most of the life of the Church. The terminology refers to a time in the Early Church when everyone at Mass, both priest and laity, would literally face eastward during the Canon (also called "the Eucharistic Prayer"). Those critical of ad orientem liturgy often complain that the priest has his back to the people; but supporters of the tradition often refer to it as "facing God."

In December 2015, Bp. Morlino instructed parish priests in the Madison diocese to restore the tabernacle to its rightful place at the front and center of the church. Because Catholics believe the Eucharist only appears to be bread and wine but is actually Christ Himself, some say it makes the most sense to give the tabernacle, which houses the Eucharist, physical primacy of place instead of putting it in a side chapel or backroom.

This is also in keeping with the Vatican's 1967 "Instruction on the Worship of the Eucharistic Mystery," which makes clear the tabernacle "should be placed in a part of the Church that is prominent, conspicuous, beautifully decorated, and suitable for prayer" (Canon 938).

Morlino was born in Scranton, Pennsylvania on New Year's Eve in 1946. He underwent priestly formation with the Jesuits, and was ordained a priest in the Society of Jesus on June 1, 1974 in the order's Maryland province. 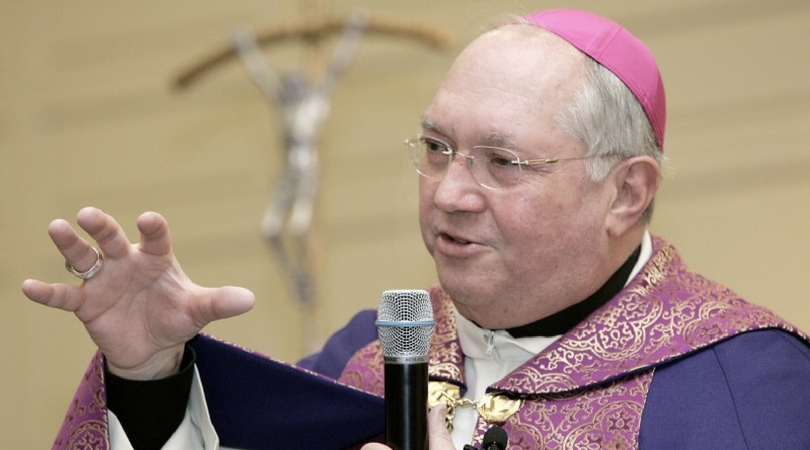 Wisconsin Bishop: Receive Communion on the Tongue While Kneeling
By Trey Elmore   •   0 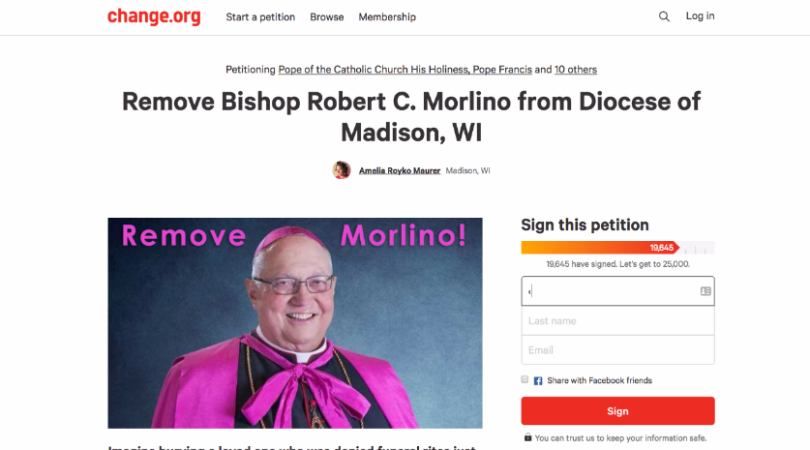 Petitions for and Against Bp. Morlino Stall
By Rodney Pelletier   •   0