GOZO, Malta (ChurchMilitant.com) - A Maltese diocese is deflecting multiple attempts by Church Militant to clarify if priests there will in fact be disciplined for refusing to give Holy Communion to the divorced and remarried.

Church Militant covered a story on January 19 reporting that Bp. Mario Grech of the diocese of Gozo allegedly threatened to suspend priests a divinis if they failed to implement the Maltese bishops' new guidelines implementing Amoris Laetitia. According to Messa in Latino:

We have been told by reliable sources, whose identity we know but for obvious reasons we cannot divulge, that in recent days Bp. Mario Grech returned from Rome and threatened priests of his diocese of Malta that he would "prohibit [their ability to offer] Mass if you do not support the directives of Amoris Laetitia authored with Bishop Scicluna."

The new directives state that couples living in an objective adultery, after a period of discernment, may approach to receive Holy Communion as long as they are "at peace with God."

Since that time the diocese of Gozo has issued a statement rejecting the international reports as "absolutely false."

Church Militant has followed up on the diocese's statement by requesting that a number of questions be answered:

Did Bp. of Gozo ever privately hint at priests that they would be disciplined in any way if they failed to implement the Malta Bishops' new guidelines on Amoris Laetitia? Can the bishop of Gozo specifically address claims that he threatened to suspend priests who refused to follow the guidelines? Where and how did such reports arise?

The diocese through its Facebook page simply responded, "Please read the attached press release" (which reiterated the bishop's rejection of the reports).

Church Militant then asked, "Can we have more information? I've already read the statement" — to which diocese responded, "There is nothing to add."

We reported on the alleged threat. We have posted an update including the press statement, but we cannot dismiss the words of this inside source who made these claims about the bishop. We would like an answer to the following question: Did Bp. Grech mention the possibility of disciplining priests in any way at all (not necessarily suspension, but discipline in other ways) if they failed to implement the Malta bishops' guidelines on Amoris Laetitia? If the answer is no, why are inside sources claiming the opposite?

The guidelines issued by the bishops of Malta claim that the divorced and remarried — as long as they are "at peace with God" — may approach to receive Holy Communion. But this contradicts Canon 915 of the Code of Canon Law, which states that priests must refuse Communion to manifest sinners who obstinately persevere in grave sin. Adultery is a grave sin. What will Bp. Grech do to a priest if he decides to follow canon law on this matter instead of obeying the Maltese Bishop's guidelines? We simply want an answer to our question so we can report on this accurately.

In a final query, Church Militant asked, "But the bishop is the one in authority who can answer these questions. Why is he unwilling to answer very simple and straightforward questions? We will be happy to publish whatever he answers."

We received the curt response, "It doesn't seem that you are 'so happy.' It is the 'inside sources' who are allegedly saying something."

The diocese went on to question our orthodoxy, asing, "Do you accept Pope Francis' Magisterium?"

In the second sequence of similarly worded questions, Fr. John Curmi of the Gozo diocese responded on behalf of Bp. Grech directing that we read the bishop's press release. He commented, " I believe that all media operators, including Catholic ones, have a grave (moral) responsibility to communicate truth and not disseminate lies and false allegations."

After Church Militant pressed him to respond to the contradiction the Malta bishops' guidelines pose to canon law and whether a priest's obedience to canon 915 would result in suspension, Fr. Curmi wrote, "You are making suppositions which are not in place. Please attain yourself to the official statement by the Diocese."

"It's a very straightforward question and one that is at the heart of this matter," Church Militant responded. "So the question is ... will your bishop suspend a priest who chooses to follow canon 915 instead of your bishop's guidelines? ... May God bless you for your clarity" — to which Fr. Curmi answered, "And may God bless you for your honesty."

Church Militant is in the process of contacting inside sources who claim they were threatened by Bp. Grech. Stay tuned as this story develops. 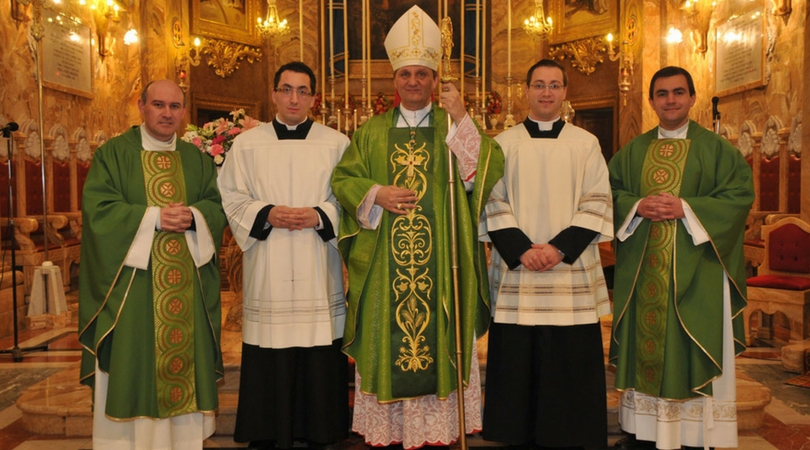