SPRINGFIELD, Ill. (ChurchMilitant.com) - One U.S. bishop is making it clear that active homosexuals may not receive the sacraments nor have their same-sex ceremonies blessed by the Church.

Bishop Thomas Paprocki of Springfield Illinois issued his decree titled, "Regarding Same-sex 'Marriage' and Related Pastoral Issues," on June 12, which reads, "Given the objectively immoral nature of the relationship created by same-sex marriages, persons in such unions should not present themselves for Holy Communion, nor should they be admitted to Holy Communion."

This decree puts canonical teeth into what Bp. Paprocki has already addressed on a pastoral level. Speaking in 2015 of divorced Catholics in civil marriages or those in same-sex "marriages," the bishop wrote, "[F]orming a 'good conscience' means that they will recognize and repent of their sins, resolve to reform their lives in accord with Christ's teachings and receive absolution in the Sacrament of Reconciliation before receiving Holy Communion."

When pastors become aware of Catholics living in same-sex relationships, the bishop directs them to call the sheep "to conversion" and advise them "not to present themselves for Holy Communion" until they've been restored to grace "through the Sacrament of Reconciliation."

In his decree, the bishop begins by calling to mind his "responsibility as a diocesan bishop" to guide the people of God entrusted to him with "charity but without compromising the truth." The bishop authoritatively ends his decree, saying "culpable violation of any of these norms can be punished with a just penalty."

This safeguard, against sacrilegious reception of the Eucharist as Bp. Paprocki's directive indicates, is rooted in Canon 915 and 916. Canon 915 states that pastors may not give Holy Communion to those who are "obstinately persevering in manifest grave sin." Canon 916 commands that a person "who is conscious of grave sin" is not to come forward to receive the Eucharist.

Forming a 'good conscience' means that they will recognize and repent of their sins, resolve to reform their lives ... and receive absolution.

Even though Bp. Paprocki is simply upholding Church law regarding the reception of the sacraments many other bishops are opposed to doing so. Prelates from Germany, Austria, Belgium, Malta and the Philippines are willing to give Holy Communion to anyone in "irregular unions" without requiring they first return to a state of grace via sincere confession.

The archbishop of Chicago, Cdl. Blase Cupich, hinted at admitting active homosexuals to Holy Communion during Rome's Synod of Bishops in 2015. Speaking at a press briefing about "gays and lesbian individuals, also couples," the cardinal said, "When people come to a decision in good conscience, then our job with the Church is to help them move forward and to respect that. The conscience is inviolable, and we have to respect that when they make decisions, and I've always done that."

Bishop McElroy in San Diego is directing the priests of his diocese to welcome "LGBT families" and consider admitting divorced and remarried couples to Holy Communion. In an interview with the Jesuit publication America, he said, "My own view is that much of the destructive attitude of many Catholics to the gay and lesbian community is motivated by a failure to comprehend the totality of the Church's teaching on homosexuality."

Upholding Church discipline regarding the sacraments was given by Bp. Paprocki in the wider context of not wanting to give the appearance of solemnizing or blessing same-sex "marriages" in anyway. To this end, the bishop forbade any member of the clergy or lay representative of the diocese from assisting at or participating in such same-sex ceremonies in any way, including "providing services, accommodations, advantages, facilities, goods or privileges for such events." He also forbade the use in such ceremonies of "sacred vessels, vestments or liturgical books."

Culpable violation of any of these norms can be punished with a just penalty.

He did say children from same-sex marriages could be baptized provided there's a "well founded hope" that they'll be raised Catholic. He indicated, however, that such baptisms may be done privately to avoid scandal. Baptized children from same-sex families may receive the sacraments if they're "properly disposed," affirmed the bishop.

Such children may attend Catholic schools, said the bishop, but same-sex parents "are to be advised that their child(ren) will be instructed, according to the Church's teachings on marriage and sexuality in their fullness, and they must agree to abide by the Family School Agreement." Such agreements require the parent to refrain from giving any public scandal and to foster an environment in private that supports the child's reception of Church teaching.

Persons living "publically in a same-sex marriage," however, may not serve as baptismal or confirmation sponsors, serve in liturgical ministry or be admitted to the Rite of Christian Initiation of Adults (RCIA) until they've "withdrawn from the objectively immoral relationship," he continued. When such people die they can't be given a Catholic burial unless they've "given some signs of repentance before their death," directed Bp. Paprocki. 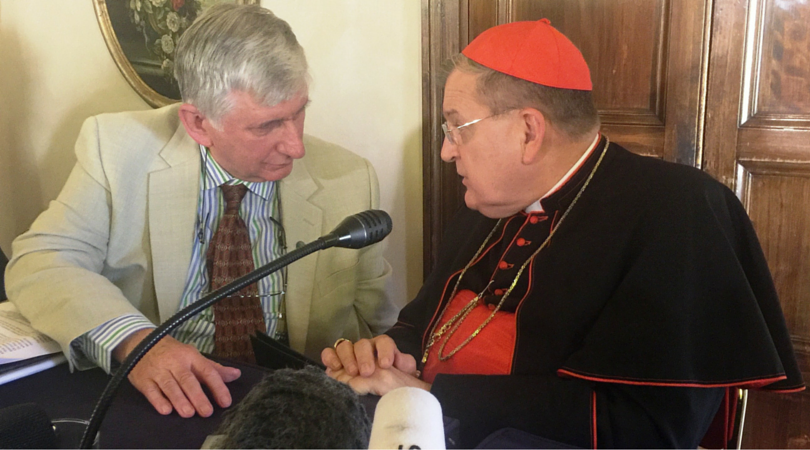