Brazil Archbishop Blames ‘Dragon of Traditionalism’ for Opposition to Pope 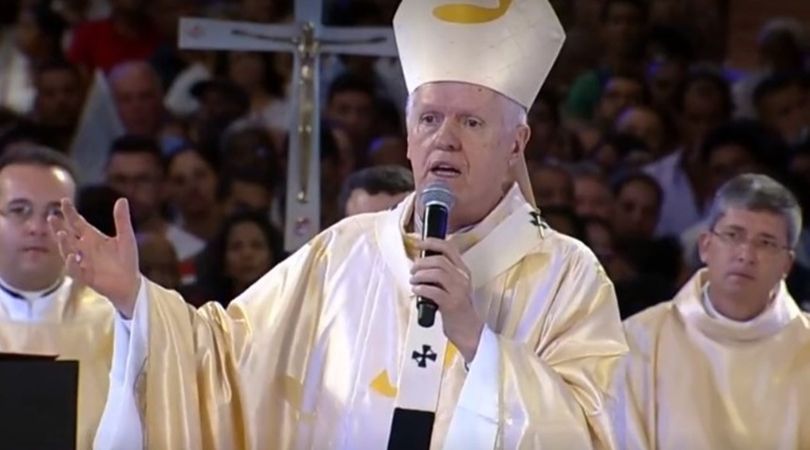 SAO PAULO, Brazil (ChurchMilitant.com) - The archbishop of Aparecida has lashed out at conservatives who oppose the Amazon Synod as possessed by the "dragon of traditionalism" and as "violent, unfair" and "shooting the Pope, the Synod and the Second Vatican Council."

Preaching at the Solemn High Mass on the feast day of Our Lady of Aparecida, Abp. Orlando Brandes said that the dragon was active and was "easing the ways of the dragon of corruption, which takes bread out of our mouth and increases social inequalities."

"Of course, in the Scriptures the dragon is the devil, the evil that organizes itself in the world," Brandes stressed in his 10-minute homily to 40,000 Catholics in the Basilica of Our Lady of Aparecida on Saturday.

The sermon invoked God's blessing on the Amazon Synod, "which is thinking about the life of those trees, those rivers, those birds, but especially those populations. Many of our relatives are there," preached Brandes at the world's second-largest Catholic basilica.

"Deliver us from evil and we will then be free so that in Brazil our children do not die anymore from one stray bullet, our young people do not commit suicide and our elderly have a place of dignity to live and survive," Brandes said.

Conservatives slammed the archbishop for politicizing the pulpit.

Conservatives slammed the archbishop for politicizing the pulpit.

"This [the violence] is committed by the left, not the right," Minister for Women, Family and Human Rights Damares Alves shot back. The archbishop said that people are "to beware of the dragon of conservatism. They must be worried about us because we are terribly Christian."

"They are concerned because the numbers say that conservatism will work in this nation," she added, explaining how the left was hypocritical for stopping the nearly 40 indigenous groups in Brazil from killing the "children of single mothers, twins or babies with physical or mental disabilities."

Meanwhile, Brazilian leftist media criticized the archbishop for cowardice after he "adapted" his sermon in the presence of President Jair Bolsonaro who attended the cathedral's 4 p.m. Holy Mass.

Refraining from attacking traditionalists, Brandes named both "right and left" and referred to "ideologies" rather than to the government, in his afternoon homily as "dragons that attack from all sides."

Speaking later to the media, Brandes returned to his attack on traditionalism:

Everyone knows what is right; we have many people holding traditionalist views who do not accept the Vatican and the Pope. Sometimes with different names and sometimes with old names. The ideology of the left and right was always in the church and we cannot be ideological, we need to be people of truth. Ideology always seeks its own interests. The truth is one person: Jesus Christ, and his gospel.

Bolsonaro, who read the first reading from the Book of Esther and received Holy Communion, was cheered as he entered the basilica at 3:55 p.m. and sat in the front row.

A few boos were also heard, but were drowned by loud applause as the president went up to the lectern to read the first reading.

At the end of the sermon, the archbishop addressed Bolsonaro: "Mr. President, feel embraced by our dear Mother, and Brazil embraces you too. We are all brothers."

Leftwing activists were quick to attack the archbishop.

"Christians should not ally with those who support torture and the death penalty. Christ would not be on Bolsonaro's side," he added.

The president tweeted on Brazil's feast day: "Our Lady, patron saint of Brazil. Thank God for my life."

The conservative Bolsonaro government is critical of the Amazon Synod, which it accuses of violating Brazilian sovereignty over the Amazon.

Over 170,000 pilgrims are reported to have participated in the celebrations on Saturday.