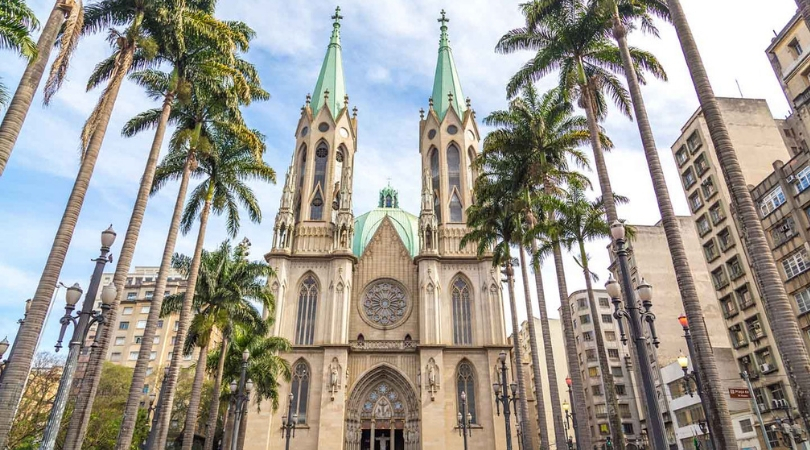 It is outrageous to witness the desecration and politicization of places considered to be holy.

"Together let's think about the great causes of humanity," said Hummes, justifying the interfaith gathering. "The synod is not exclusive; it is inclusive. The Amazon crisis is serious. We are experiencing a major socio-environmental crisis."

Leftist groups in the congregation soon turned the service into a Lula Livre ("Free Lula") demonstration calling for the release of former Brazilian socialist president Luiz Inácio Lula da Silva, who began serving a 12-year prison sentence in 2018 for corruption.

The protestors hung a clothesline with Lula Livre-embroidered penants at the foot of the statue of St. Paul the Apostle in the sanctuary.

There were also reports of violence against a group of traditionalist Catholics speaking out against the event, as cathedral authorities forced them out of the building.

The Interfaith Act for the Amazon Synod was organized last week by REPAM (Rede Eclesial Pan-Amazônica), an eco-socialist network of the nine churches of the Amazon region, inspired by Pope Francis and backed by the Latin American Bishops' Conference.

"It is outrageous to witness the desecration and politicization of places considered to be holy by millions of Catholics," Brazilian missionary Fr. Jônatas Bragatto told Church Militant. "It is even more scandalous to hear of a Candomblé witch, evoking blessing from her deities over the synod, in front of the altar, and a Kardecist medium and Muslim imam endorsing the entire bogus narrative."

Candomblé is a form of indigenous Brazilian witchcraft, though practitioners deny this. Kardecist spiritism is a Brazilian cult. It teaches that the living can communicate with the dead through mediums or psychics.

At the interfaith service, composed of spiritual leaders from 12 religions and cults, Sheikh Al Bukai of the National Union of Islamic Entities cited the Yellow September suicide prevention campaign, drawing a parallel with the Amazon Synod: "Today's meeting is about a collective suicide that humans commit against nature. I want to wish the Amazon Synod to be a light that illuminates the hearts of rulers."

Cardinal Sherer spoke of the willingness of various sectors to discuss the threat to the environment: "This interest in the Amazon already means a lot. Something is happening to the Brazilian people, our consciences, the governments."

A marxist protestant pastor, notorious for pioneering Integral Mission Theology and defending president Lula, said that the Amazon Synod would provide a way out of the environmental crisis.

"We fail, but there is always hope, the Synod is hope. May it succeed," he commented.

A day after the event, Cdl. Scherer issued a statement on the archdiocesan website dismissing reports of the disruption as from "a lot of polluted sources" and warning that "anyone who drinks from poisoned sources gets poisoned too and can even die."

"Everything went smoothly and without any inconvenience," he insisted, naming and shaming those as liars who said it was a "shambles” and a "desecration."

"After I left the Cathedral, I saw pictures on social media showing penants hanging like a clothesline in a side space of the cathedral, but none of this was part of the organization of the interfaith act, nor did it influence the act," the statement said, emphasizing that the service was not an "act of syncretism."

Brazilian Catholic philosopher Bruno Braga tweeted: "Dom Odilo Scherer's 'note' about the aberrations in the Sé Cathedral is a spit in the face of Catholics. A dreadful defence of desecration."

In another tweet he noted: "Today, security guards and militants tried to expel Catholics from the Se Cathedral for communists, rogues and … Christ and His Holy Bride betrayed."

Dom Odilo Scherer's 'note' is a spit in the face of Catholics.

Sources showed Church Militant pictures of leading leftist politicians at the protest — including Eduardo Jorge, the Green Party's presidential candidate in the Brazilian general election of 2014, who pushed for the legalization of abortion and drugs.

A day before the fiasco at São Paulo Cathedral, liberation theology activists and Petistas (Workers Party) organized a "Free Lula" demonstration outside the Basilica of the National Shrine of Our Lady of Aparecida.

The next day, traditionalist Catholics purchased advertising space and erected a billboard in Londrina with the slogan "Take the PT (i.e., Petistas) from the altar: for a church without a party."

The billboard, signed by the #BrasilCatólica movement, criticizes the positions of the Dom Geremias Steinmetz, archbishop of Londrina, considered by some Catholics to be a member of the Workers Party.

"Unfortunately, this is not the first time that Petistas have used the cathedral to promote riots and contradict the doctrine of the Catholic Church, trying to impose religious syncretism and political ideologies through events and demonstrations or even within Holy Mass, asking for freeing Lula in the Prayer of the Faithful," Catholic journalist Bruna de Pieri reported.