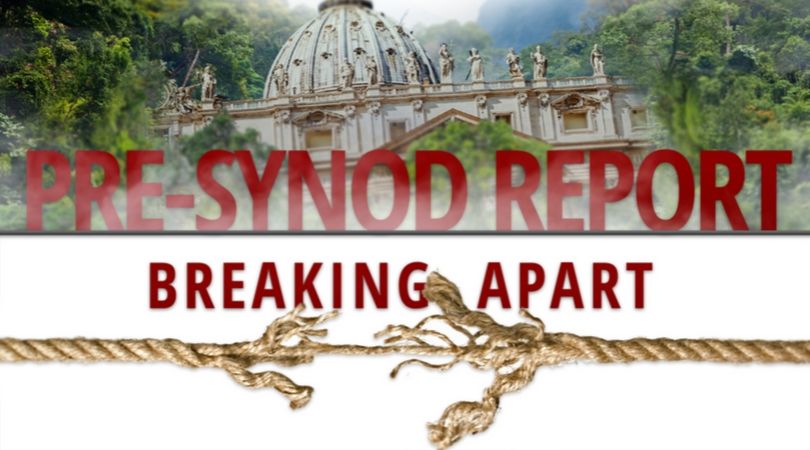 How can it be put back together?

In the run-up to the synod, we are going to bring you a series of reports to help you better understand the stakes.

The Francis papacy has had the effect of bringing every dissident and unfaithful cleric out into the open, feeling as though they now have license to say and do whatever they please.

There's probably some truth to that.

Much of what some folks here in Rome privately call an "operational schism" has been in effect for decades, just below the surface, but detectable to the more discerning.

The changes, and even in some cases abuses, that have now become commonplace in the liturgy were the first visible signs of a schism forming.

While it all got its visible start under the papacy of Paul VI, the promoters of dissent were forced to go somewhat underground in the papacies of John Paul and Benedict.

While it all got its visible start under the papacy of Paul VI, the promoters of dissent were forced to go somewhat underground in the papacies of John Paul and Benedict.

It's clear that for a variety of reasons, large numbers of revolution minded men were actually promoted to bishop and even cardinal during the reigns of those two popes.

And now, under Francis, they are hitting their stride and doing everything they can to institutionalize the operational schism.

That's certainly the driving force behind the Amazon Synod which has been in the works since the first weeks Francis took office.

That meeting put into motion the plan which eventually produced next week's Amazon Synod — a plan which has unfolded over the past six years.

In a stunning turn of events, Abp. Barreto later remarked that Francis would back liberation theology's agenda for the Amazon, telling supporters, "Expect things that you never expected ... expect profound changes."

As opposition to his papacy has grown among faithful Catholic, as well as politically conservative Americans who are not Catholics, Francis and his allies have stepped up efforts to recast the operational schism.

They are deflecting heavily from theological issues, which are at the heart of the conflict, and presenting them as a type of class warfare, rich against poor, First World versus Third World.

That's why all the attention on immigration and so-called man-made climate change.

It's a deliberate masking over by the Francis Vatican of the real issue and presenting things in political terms.

This has been the dominant tactic for almost the entire papacy of Francis. It's all about politics meant to advance globalism, the 21st-century term for socialism, also known as Marxism.

It's why liberation theology is the driving force of the synod and why the Pope has resurrected the phony theologian Leonardo Boff, a former priest and leading proponent of the system condemned by John Paul in the strongest terms.

The operational schism that has taken root in the Church was introduced on two fronts — one in the West, the other in South America.

The one in the West, smuggled in by Marxist-minded clergy attacked the Church's moral teachings in the area of sexuality.

Liberation theology is the driving force of the synod.

The one in South America, predominantly Brazil, again smuggled in by Marxist, aimed at pitting the poor against the Church, which was associated with money and the powerful.

Both strategies produced fantastic results; a double-collapse, if you will.

The Soviet KGB introduced liberation theology into South America and eventually Central America as a means to attack the Church and advance Communism.

This reality is what dominated Ronald Reagan's foreign policy, the fight against Communist aggression in that part of the world.

For this reason, the Reagan administration, sensing this turning away from Catholicism and embracing of Marxism, developed a plan with American Evangelicals to go south and combat the effort.

What came about in South and Central America then was a three-way battle between Protestantism, Catholicism and Marxism, with the Marxists able to infiltrate the Church with the phony theology of liberation.

That set the stage for what boiled down to a kind of proxy war, on one side American interests duking it out with Marxist forces which had co-opted the Church.

This is perhaps one reason why Francis carries such antipathy toward the United States.

But whether that is the case or not, what is the case is the embracing and resurrecting of liberation theology has given the green light to dissenters in the west proceed full steam ahead with challenging Church teaching in a variety of areas, most especially sexual morality.

This two-headed serpent was not killed by either John Paul or Benedict, and in some cases was unwittingly advanced.

The disciplines of the Church were not properly brought to bear when they should have been.

If and when this current crisis is ever recovered from, if it is possible to prevent any further breaking apart, this may be the enduring lesson; heresy, apostasy, schism, dissent must be driven from the Church at the very first sign, even at the risk of being called "rigid."