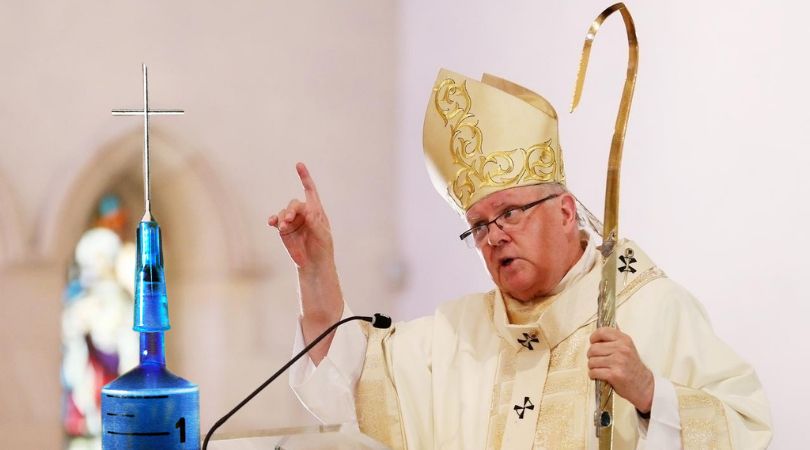 BRISBANE, Australia (ChurchMilitant.com) - The archbishop of Brisbane has issued an iron-fisted diktat banning priests who are not double vaccinated and threatening to suspend the faculties of clergy who conscientiously object to the abortion-tainted jab.

"Clergy not doubly vaccinated are failing in their duty to care for the faithful," Abp. Mark Coleridge warns, ordering any cleric who does not comply to "stand aside from pastoral duties in his parish and from all pastoral ministry until he has been fully vaccinated."

"Should a priest or deacon in such circumstances decline to stand aside voluntarily, I will need to consider the temporary suspension of faculties until he fully complies," Coleridge threatens in his four-page internal letter dated Monday.

All diocesan clergy, including religious engaged in a parish, the letter says, are ordered to submit evidence of vaccination no later than Dec. 15 by "uploading a valid vaccination record to his Aurion Employee Self Service (ESS) portal."

In defiance of the Vatican's Congregation for the Doctrine of the Faith (CDF), which permits Catholics to refuse abortion-tainted vaccines for "reasons of conscience," the prelate says he will "not consider conscientious objection to receiving the vaccination."

Clergy not doubly vaccinated are failing in their duty to care for the faithful.

"I fully respect the rights of conscience, especially when properly formed in the Catholic understanding. But I too have a conscience; and it is not just legal obligation but conscience which has led to my decision," Coleridge, president of the Australian bishops' conference, argues.

"While the state government has outlined incredibly harsh restrictions for the unvaccinated population that take effect Dec. 17, the government has not mandated jabs for employees of churches and places of worship," an archdiocesan source told Church Militant.

Abp. Mark Coleridge explains his decision to get the jab

Requesting anonymity, the source noted the archdiocese was "proactively coercing people" into taking the jab in an unlawful and unreasonable manner with no respect for the CDF ruling or for the primacy of conscience and was breaching medical privacy.

Clergy asking for medical exemptions are required to provide a "satisfactory medical certificate from a registered medical practitioner which certifies that he is unable to receive a COVID-19 vaccination because he has a recognized medical contraindication."

The organization does not have a legal responsibility for an individual's medical reaction.

The doctor must indicate "whether the medical contraindication would permanently or temporarily prevent his vaccination" and "the medical certificate must specify when he may be able to receive the vaccination."

But "as the decision to be vaccinated or not remains with the individual, the organization does not have a legal responsibility for an individual's medical reaction," the archdiocese's vaccination policy states. Still, it notes, an employee who refuses to be vaccinated and does not have a valid medical exemption "may not be able to continue working with the organization."

The policy also specifies "workers must maintain all required vaccinations, including booster shots, as directed in the future."

The archbishop's mandate applies to employees, contractors, students and volunteers working within the archdiocese's agencies and parishes. Churchgoers and clients of the archdiocese do not have to be vaccinated.

Coleridge acknowledges that having the COVID-19 shot is a "matter of personal choice" but contends he has a "legal obligation" in civil law as an employer of archdiocesan staff and a "significant duty" in canon law to "attend to presbyters."

The prelate cites canon 384 authorizing bishops to "protect their [priests] rights and take care that they correctly fulfill the obligations proper to their state." But he omits the second half of the sentence that clarifies: "that the means and institutions which they [priests] need to foster spiritual and intellectual life are available to them."

Coleridge quotes canon 529 §1 on the pastoral care of the faithful and notes that because "clergy engaged in parish ministry must be close to the people," clergy in "pastoral ministry who are not doubly vaccinated put the faithful" and "their families … at risk."

Further, Coleridge quotes the Australian Catholic Bishops' Conference's Code of Conduct "Integrity in Ministry," according to which clergy in parishes "owe a professional duty to 'provide safe and healthy working conditions' for parish staff."

In October, Vicar General Peter Williams of the diocese of Parramatta wrote to clergy that the bishop had taken note of unvaccinated clergy, and while the choice was "respected," it would bring about "a number of challenges."

"If you have made the decision not to be vaccinated, you will be able to celebrate public Masses in the Church" but unable to visit a school, an aged care home or a hospital, Williams said.

"At the current stage of reopening, until 1 December 2021, only those who are vaccinated are able to visit other people's residences and homes. This would mean you will be unable to visit a residence of the parish community until then," he added.

On Sunday, Bp. James Foley of the diocese of Cairns accused parishioners of "campaigning against vaccination on all sorts of ill-founded prejudice."

"In almost 30 years in this position, I've never encountered such divisiveness and, dare I say, ignorance," Foley claimed. "I'm really concluding that I'm wasting my time talking to them, and they're wasting their time talking to me."

I will need to consider the temporary suspension of faculties until he fully complies.

Sydney vicar general Fr. Gerry Gleeson said a "handful" of priests have refused to get the jab, and despite continual "exhortations" to get the jab from Abp. Fisher, the Church was facing some vaccine resistance.

"The letters of complaint have begun already from parishioners who have found out that their man is saying no," Gleeson told Sky News.