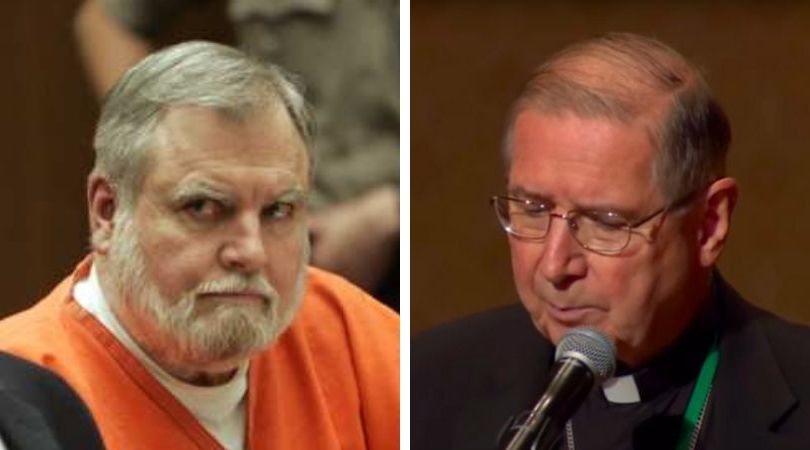 LOS ANGELES (ChurchMilitant.com) - John Doe 1001 revealed his identity at a media briefing on Thursday to hold Cdl. Roger Mahony accountable for covering up a homosexual pedophile priest and to encourage other victims to come forward.

Represented by Jeff Anderson & Associates, Alberto Sanchez (John Doe 1001) came forward to hold the archdiocese of Los Angeles accountable ― and Mahony in particular ― for its cover-up of serial abuser Fr. Michael Stephen Baker, to encourage other victims to come forward and to protect other children, especially since Baker is no longer in prison.

"Cardinal Roger Mahony was complicit because he knew Fr. Michael was a sexual predator long before I was assaulted by Fr. Michael," said Sanchez.

"My hope is that others seeing this will find the courage to come forward and speak up in an attempt to reclaim the lost trust and [their] dignity," he added.

This lawsuit will uncover and expose the extent of this conspiracy and cover-up in this archdiocese that reaches to the highest levels of the archdiocese ― even directly to Cdl. Roger Mahony.

Mike Reck, a trial attorney for Jeff Anderson & Associates, spoke at the briefing.

"This lawsuit is one of vital, public necessity, and public need which seeks to remedy a dangerous condition that has been, and is present, in the archdiocese of Los Angeles," he said.

"This lawsuit will uncover and expose the extent of this conspiracy and cover-up in this archdiocese that reaches to the highest levels of the archdiocese ― even directly to Cdl. Roger Mahony," added Reck.

Around 1986, he told Mahony that he had sexually abused children. Mahony sent Baker for some therapy and then returned him to ministry soon thereafter.

In 2013, CBS published a piece on Mahony's concealment of Baker's crimes.

The interviewer asked Mahony why he did not report Baker to authorities: "Wouldn't that be the right thing to do?"

"Well, today it would. But back then, that isn't the way these matters were approached," answered Mahony.

My predecessor, retired Cardinal Roger Mahony, has expressed his sorrow for his failure to fully protect young people entrusted to his care. Effective immediately, I have informed Cardinal Mahony that he will no longer have any administrative or public duties. Auxiliary Bishop Thomas Curry has also publicly apologized for his decisions while serving as Vicar for Clergy. I have accepted his request to be relieved of his responsibility as the Regional Bishop of Santa Barbara.

Then, in February 2013, Gomez released a statement that Mahony and Curry were in good standing and free to minister to the faithful without restriction:

His whereabouts and whether he has access to children are unknown at this time.

Mahony spoke at the U.S. bishops' General Assembly in Baltimore in November 2018. Pending any further statements from Church hierarchy, he remains in "good standing."

It is estimated that Baker sexually molested 23 children. His whereabouts and whether he has access to children are unknown at this time.