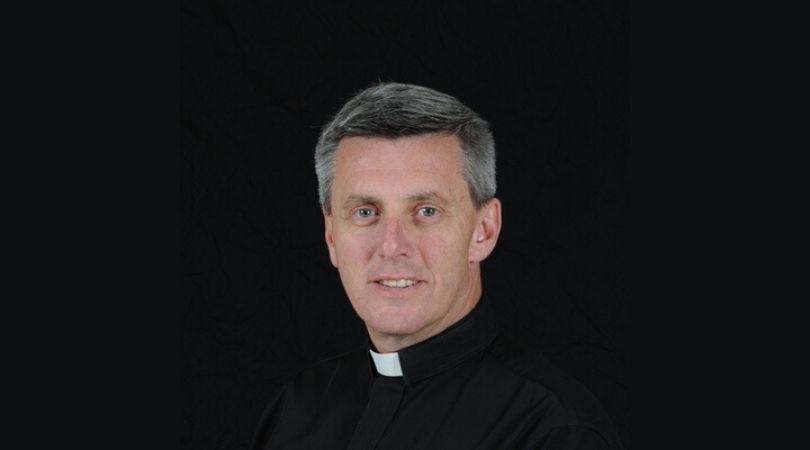 OAKLAND, Calif. (ChurchMilitant.com) - An Irish-American priest in California is calling his bishop a racist and claiming American prelates support white supremacy and are killing the Church by not celebrating social justice in line with Vatican II.

After a protest in front of the Cathedral of Christ the Light in the Oakland diocese "to inspire church leaders to adopt an active role in dismantling racism in the Roman Catholic Church," Fr. Aidan J. McAleenan posted a Facebook video claiming the hierarchy of the Catholic Church is failing to fight systemic racism.

With a sign behind him reading "Black Lives Matter," the priest said, "So, when I say, as the pastor of a black Catholic Church in Oakland, California that these bishops are more concerned about how white people feel comfortable with their own fragility for being white and their own supremacy — whether they believe it or not, this is a racist country. And the Church is extremely racist."

Described in local media as an "activist priest," McAleenan secured a lawyer in both civil and canon law prior to a homily he gave on Pentecost Sunday.

"On Pentecost Sunday, I stated — and I believe — that the bishops of the United States have their knee on the neck of the people of God, the Church. And that we needed the Church to be able to breathe," McAleenan said.

"And what I meant by that is the Vatican II breath of fresh air that was given to the life of the Church, where 2,200 bishops voted to have Vatican II, to celebrate social justice, to let the light of the gospel shine brightly in the Church," he continued. "And that is the spirit in which I became a priest. And as a Redemptorist, I grew up in a Church that taught mission, liberation theology."

McAleenan talked specifically about the protest at the Cathedral on Sunday.

"We went down to the Cathedral today. We invited the bishop to come and protest. We weren't protesting against him," he said. "We were protesting against the racism and the lack of movement in the Catholic Church for equality, and the lack of voice for black people and the end of systemic racism. It's what Jesus would do. And we must do what Jesus would do."

If you surround yourself with right-wingers, that's all you're going to get. No pushback — no experience of the Holy Spirit.

The bishop accused McAleenan of being "clerical," which shocked the priest, who said the bishop is "more Trumponian than anybody."

"If you surround yourself with right-wingers, that's all you're going to get. No pushback — no experience of the Holy Spirit," he added.

Commenting on the meeting, McAleenan said, "Michael Barber is a racist. The bishop of Oakland is a racist."

And as a white person, I am ashamed of my privilege.

"I am a good person. I am a good priest. I love my people and I want to do what is right for them," he said with misty eyes. "And as a white person, I am ashamed of my privilege."

Father Aidan McAleenan is the pastor of St. Columba in Oakland, California. The Church has been featured in America Magazine and the National Catholic Reporter.

McAleenan joined the Association of United States Catholic Priests (AUSCP) about five years ago. He is currently a co-chair of AUSCP membership and is focusing on expanding membership.

In a recent video for the group, McAleenan discussed joining the AUSCP.

I was looking for an experience of church that was based on the principles of Vatican II, and what I noticed is that a lot of the people that I wanted to hang out with or be with were the older guys that were involved. The younger ones not so much because of the sort of JP II, Benedict idea of the Church that didn't resonate with me.

According to the website, the AUSCP is currently working on eliminating racism in church and society, comprehensive immigration reform, the ordination of married men and women deacons, climate change and care for "our common home."

The Lepanto Institute began investigating the AUSCP about four years ago and concluded the group is "heretical," noting the group seeks to redefine the Catholic priesthood and hierarchy, calls for women's ordination to the priesthood and gives venue to condemned LGBT organizations.

McAleenan joined ... AUSCP about five years ago. The group seeks to redefine the Catholic priesthood and hierarchy, calls for women's ordination to the priesthood and gives venue to condemned LGBT organizations.

In April, McAleenan hosted a talk by openly gay Jesuit Fr. Bryan Massingale in early April via Zoom, which is now posted on Vimeo.

"Father Bryan gave St. Columba a compelling and thoughtful incite to racism in the U.S. ... and a timely discussion on race in light of our current lockdown and pandemic," reads the description for the talk. "Who is disproportionately dying of COVID-19 in the U.S.?"

Dissident pro-LGBT group New Ways Ministry recently published a piece on Massingale, who is open about being gay and who has established a record of distorting Catholic teachings.