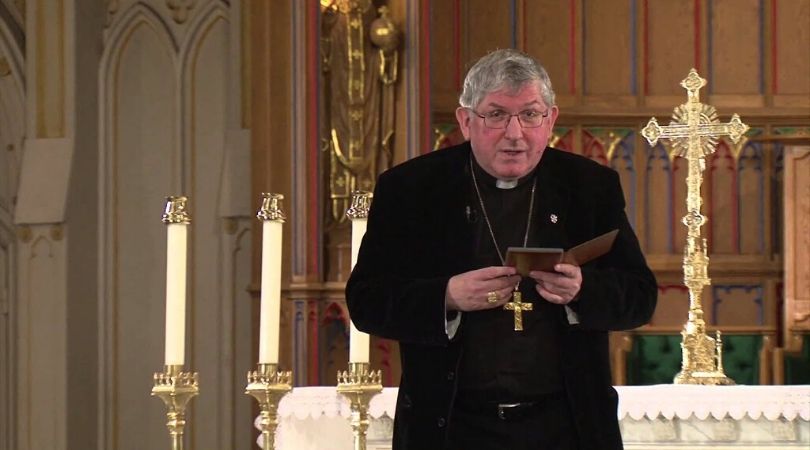 Approves of inclusion of gender ideology

On Nov. 7, 2019, the Toronto Catholic District School Board — Canada's largest Catholic school board, forming more than 90,000 Catholic children annually — voted to add transgender ideology as a protected ground for non-discrimination into its code of conduct.

The 12-member, elected board of trustees passed the anti-Christian motion by a vote of 8 to 4, which added the terms "gender identity" and "gender expression" as protected classes that must be "respected" throughout the school environment.

Campaign Life Coalition has been following this tragic situation closely, and in fact, we've been lobbying His Eminence, the cardinal-archbishop of Toronto, for quite some time, begging him to command the Catholic School Trustees to reject transgender ideology.

A clear directive from the spiritual leader in the diocese, Cdl. Thomas Collins, telling trustees to vote against gender ideology would have influenced at least a couple more trustees to vote in accordance with Catholic teaching, and defeated the motion to adopt gender identity theory in the schools. And even if they disobeyed him, it would have been a powerful teaching moment by the shepherd to encourage faithful Catholics to continue defending the Faith against this transhumanist heresy that attacks the image of God in creation.

Cardinal Collins didn't even have to pronounce a direct edict on how to vote, in order for this evil policy to have been defeated. If His Eminence had simply issued a strong public statement declaring gender identity theory to be "incompatible with Christianity," it would have likely been enough to encourage a majority of trustees to defeat the motion. Moreover, the cardinal would have been taking on his proper role of leading this spiritual battle, instead of laypeople at Campaign Life Coalition having to do it.

However, Cdl. Collins did the opposite of what thousands of faithful Catholics were pleading with him to do by caving in to the heretical demands of the LGBT lobby and giving his approval to the addition of anti-Christian terms to the code of conduct.

His Eminence has seen fit to bless as appropriate for Catholic schools the very same theory of gender identity that Pope Benedict, Pope Francis, Catholic doctrine, the Holy Bible and natural law have condemned as a sin and an "error of the human mind."

He has approved adding the insidious, anti-Christian ideologies of "gender identity" and "gender expression" to the Toronto Catholic School Board's code of conduct, which will now treat the mental illness of gender dysphoria as a "human right."

As a direct result of this massive betrayal of Christ, Cdl. Collins will usher an anti-Christian climate into our Catholic schools. Faithful Catholics in Toronto will now have to watch in horror as sexually confused male teachers show up to class dressed in drag and present themselves as "women" to our children, thus undermining their belief in the teaching of the Church and Sacred Scripture.

We will now be forced to witness the spectacle of boys showing up to class wearing dresses and demanding that all students, teachers and parents use the opposite-sex pronouns of their choice, or other whack-a-doodle transgender pronouns, like "ze" and "zer," all the while condemning faithful Catholics as "bigots" and "haters."

Catholic educators who dare teach the scientific and religious truth that there are only two sexes — male and female — will be found in violation of the code, disciplined, sent to re-education camp or fired.

Given his staggering approval of the LGBT agenda, we already know that the cardinal-archbishop will not lift one finger to defend these faithful Catholic teachers against the coming persecution. But it gets worse.

The code just passed by the majority of trustees extends beyond school grounds and beyond work hours. Teachers and students who speak against transgender ideology on their own time and off of school property can still be found guilty of behavior "that negatively impacts school climate." So if a faithful Catholic teacher, for example, speaks at a pro-family event, or writes a letter to the editor of the newspaper articulating Catholic teaching about transgender ideology, he or she can be found guilty of violating the code of conduct and be fired.

All of this will have the effect of destroying the Catholic faith in the hearts and minds of students, teachers and many parents.

And what about the children? Cardinal Collins is now guilty of material, if not formal, cooperation with evil. He has given permission for schools to encourage children to identify as the opposite sex and thereby to cooperate with their delusion. He has given tacit approval for schools to support and encourage children to pursue puberty-blocking, artificial hormone therapy and chemical castration.

Eventually, for some of these sexually confused children, it will lead to the amputation of healthy breasts and penises so as to impersonate the opposite sex. I have no other way to say this than to say it plainly: Cardinal Collins may be facilitating the sexual abuse of children by his approval of gender ideology. What he has done, whether he realizes it or not, is straight-up evil.

Cardinal Collins may be facilitating the sexual abuse of children by his approval of gender ideology.

Campaign Life Coalition has started a petition and organized a pray-in outside the cardinal's archdiocesan office calling him to conversion and to make reparation for this evil. We are calling on him to make reparations by publicly renouncing his support for gender ideology, and to make a public statement before the final vote on the code of conduct, in which he orders trustees to vote against adding gender identity/expression. This will be a solemn, quiet and peaceful prayer event we hope will soften the cardinal's heart enough to allow the Holy Spirit in, to give His Eminence the courage he needs to confront this attack on the image of God in creation, and on God's plan for humanity.

I cannot explain why Cdl. Collins has so consistently chosen a failed strategy of appeasement in dealing with the homosexual lobby's incursions against the Church. It has been a problem from the first day His Eminence came to Toronto.

Under his leadership, he has allowed sacrilegious homosexual Masses to continue at Our Lady of Lourdes Parish in Toronto. The dissident priest who runs them has never been defrocked, and according to local newspaper reports, the cardinal has given his personal blessing for the "gay Masses" to continue. Under Cdl. Collins' leadership, gay pride clubs were accepted into Catholic schools, and a militant, LGBT-focused sex curriculum was also imposed on all publicly funded schools, including Catholic ones.

Each time these assaults on the Church came, His Eminence ignored the pleas of faithful Catholics urging him to invoke Section 93 of Canada's Constitution Act, which gives the diocesan bishop the constitutional right to reject any law, regulation or government directive that adversely affects the content of faith and morals. Each time, he bent the knee to these attacks on Catholic faith and morals.

Now because of his Neville Chamberlain-esque appeasement strategy, the Catholic school system has been brought to the precipice. It is almost completely de-Christianized, a process that has been underway for some time already. God-hating atheists in the media and some anti-Catholic politicians have been calling for an end to public funding of Catholics schools in Ontario, and to amalgamate the separate schools into the secular, public system.

As a result of Cdl. Collins' betrayal, many faithful Catholics will now join that call in the hope that the bishops will be forced to create and fund a totally private, authentically Catholic school system.

All of this destruction and theft of the Church's patrimony will be on the cardinal's shoulders, not to mention the souls who may perish as a result of this evil ideology acquiring dominance in our "Catholic" schools and consequently leading some to reject God.