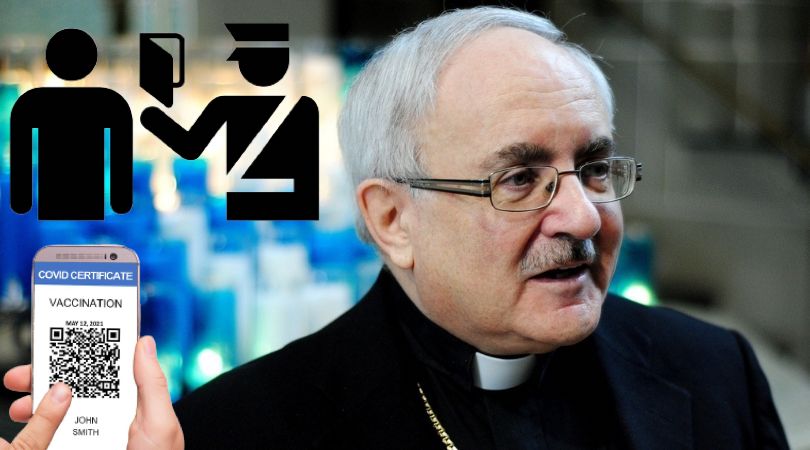 MONCTON, Canada (ChurchMilitant.com) - A Canadian archbishop who fired a faithful priest for denouncing sodomy, cohabitation and abortion has acquired the dubious distinction of becoming the world's first prelate to ban the unvaccinated from attending Holy Mass.

In a strongly worded diktat issued Friday, Abp. Valéry Vienneau, who heads the archdiocese of Moncton in New Brunswick, said he would police entry to churches by enlisting volunteers to stand "at the doors of each church" demanding "full proof of vaccination."

Parishes will collect and record the names of people permitted to enter "on a list of fully vaccinated people" that "will be used again on subsequent Sundays" and "may eventually be requested by the government," Vienneau announced.

The unjabbed are also barred from participating in services offering the sacraments of baptism, reconciliation, matrimony, and confirmation — and even from attending funerals of family members, relatives and friends.

Archbishop Vienneau, who proposed shutting 20 out of 53 churches in his rapidly declining diocese in 2017, says he ordered the ban on unvaccinated parishioners after meeting with Dorothy Shephard, minister of health and inclusive communities for New Brunswick.

Shephard, who said she would "move heaven and earth" to make sure women have access to abortion, supported an authoritarian bill in 2020 that would make proof of immunization mandatory for all students with no room for conscientious or religious exemptions.

"The minister made it clear to us that she does not require masks, sanitizing or social distancing at our gatherings," Vienneau stated. "Instead, she wishes to have gatherings of fully vaccinated people to keep people safe and to act as an incentive for the unvaccinated."

"We ask you to implement these new measures in each of your Christian communities not only to respect the government's request but, above all, to help stop the spread of the virus among our population," Vienneau urged.

"We would not want one of our places of worship to be the location of a COVID exposure due to our negligence. The minister of health is counting on our cooperation," he noted.

Vienneau, who ironically ordered several parishes in 2018 to return federal funding they applied for without reading the fine print on abortion rights, is now promoting the abortion-tainted jab.

We are in this predicament thanks to the long, loud silence of bishops.

"We cannot compromise our human, Catholic and Christian values just to please the government," Vienneau said, addressing the confusion over parishes that acquired the funding to sponsor summer jobs for students.

Speaking to Church Militant, a priest from Sydney said that the faithful were "relieved to hear of Abp. Fisher's attempts to convince the NSW government that public worship is an 'essential service' and that welcoming only the immunized at Mass is 'divisive.'"

"It is, however, too little, too late, and no more than a Band-Aid for a broken leg. We are in this predicament thanks to the long, loud silence of bishops who cravenly acquiesced to closure of their churches while cellar doors and pet supply stores remained open," the priest lamented.

For the Church of Jesus Christ to shut out those deemed by the State to be social undesirables would be anathema to us and a denial of the truth of the gospel.

When Vienneau was bishop of Bathurst, he sacked 85-year-old Fr. Donat Gionet for preaching against a homosexual "Pride" parade in Moncton.

Bishop Vienneau expressed regret that Gionet's comments had upset the faithful and said that the priest had refused to recant and alter his statements.

Father Gionet said that the diocese had not given him an opportunity to defend himself before suspending him. "To you, the diocesan authorities: Did you ask me what I said exactly during the homily in question?" Gionet asked. "They did not, but only listened to people who are frustrated."

In his sermon, he noted that while "the gates of Hell" seek to destroy the Church, it is, in fact, Catholics who "destroy our Church" today.

Noting the high rate of abortions among Catholics and the rash of homosexuality plaguing the Church, the priest said that homosexuals and cohabitating couples ought not to receive Holy Communion, but are still welcome to attend Mass.

Moncton archdiocese has paid over $12 million in compensation to 109 victims of clerical sex abuse, with over 56 lawsuits brought before New Brunswick courts. Many of the victims are altar boys or boy scouts.

Vienneau has blamed the steep decline in the archdiocese on aging priests and parishioners and has called for the culling of 20 ostensibly unsustainable churches because of plummeting finances and parish attendance, stressing: "We don't have a choice."

The archdiocese demolished the brutalist-styled St-Louis-de-France church in Moncton amid declining attendance in 2019 and sold the property to developers for the construction of an 80-unit apartment block.

According to the Catholic Church's Code of Canon Law, "Sacred ministers cannot deny the sacraments to those who seek them at appropriate times, are properly disposed and are not prohibited by law from receiving them" (can. 843, §1).

The minister of health is counting on our cooperation.

The Vatican's Congregation for the Doctrine of the Faith (CDF) has stated that "vaccination is not, as a rule, a moral obligation and that, therefore, it must be voluntary."

Over a thousand Christian leaders in Britain signed an open letter to Prime Minister Boris Johnson categorically stating they would not bar the unvaccinated from gathered worship, Church Militant reported.

"For the Church of Jesus Christ to shut out those deemed by the State to be social undesirables would be anathema to us and a denial of the truth of the gospel," the pastors noted, signing a petition in April.