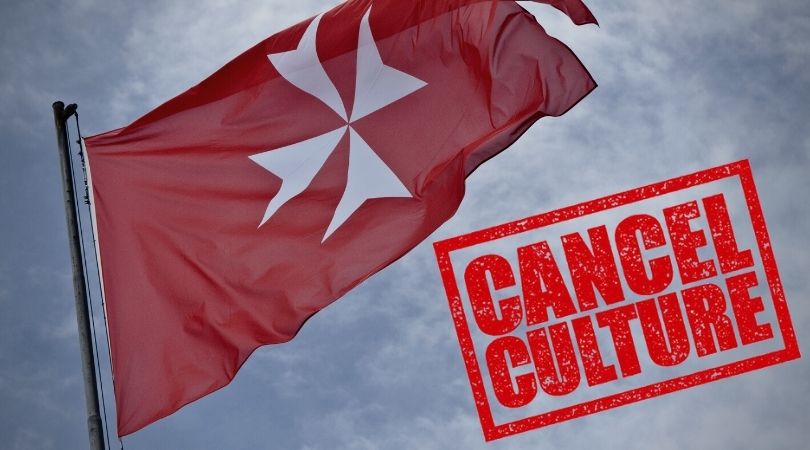 Cancel culture in the Order of Malta

The Order of Malta, of a heroic and glorious past, has fallen into a sad state of decadence. Its leaders now attempt to either silence members who defend the Faith or expel them as they did to me.

Peter Kelly, president of the American Association of the Order of Malta, informed me via letter dated Dec. 28, 2021, of a decision by members of the order's Sovereign Council to expel me. In the letter, Kelly said he'd been notified by the grand magistrate in Rome of a meeting held Dec. 8 by the Sovereign Council. The Council had met to review transcripts of a hearing held Nov. 2 before the Disciplinary Committee via Zoom. Kelly related that after reviewing the transcripts and discussing related materials, the Council had then decided to dismiss me from the Order of Malta, effective Dec. 8.

Kelly enclosed a copy of the decree removing me as a Knight of Magistral Grace from the rolls of the Order of Malta. He then closed his letter by saying that under article 129 of the order's constitution and code, I had the right to appeal the disciplinary resolution to the Magistrate Courts in Rome within 30 days.

All that pompous language was simply to let me know that I was expelled, period!

All that pompous language was simply to let me know that I was expelled, period! But I played their game by appealing to the Sovereign Council in Rome. The Council informed me that I needed an attorney in Rome to represent me and that everything had to be in Italian, the official language of the Vatican.

But they made a glaring mistake in that brouhaha. In their eagerness to expel whoever disagrees with their pretense of infallibility, they mixed up the accusations! I was judged by the Sovereign Council in Rome for an accusation entirely different from the one issued by the American Association!

The American Association had accused me of "speaking in the name of the Order of Malta," which is forbidden by the code. But in the Zoom meeting, I proved to them that I had absolutely not broken this rule of the code as I had never spoken in the name of the Order, but always in my own name. They were so stunned by the logic of my argumentation that they — President Kelly, Executive Secretary Fr. Jeffrey Trexler and another member — had absolutely nothing to say — zilch.

They then passed the buck to Rome, employing the strawman fallacy of attributing to me words that I had not said. Based on this false testimony, the Council in Rome judged me. Consequently, I wrote three times to the American Association, asking (nay, demanding) a verdict, to let me know how I was guilty of speaking in the name of the Order, which was their primary accusation. To this day, they've remained as silent as an Egyptian mummy.

They conveniently forgot they had summoned me to attend a meeting of the Disciplinary Committee to judge whether or not I had spoken in the name of the Order, contrary to the code. I attended the meeting and defended myself with clarity and courage. All members present were so stunned by the logic of my defense that they had nothing to say. There was no verdict. Was I deemed guilty or innocent?

So, I concluded, and declared to them, that until such time as they issue a verdict on this fundamental accusation, I am, and continue to be, a knight of magistral grace of the Sovereign and Military Order of Malta. I will, therefore, continue to defend the Catholic Faith as I had vowed to do, with courage, respect and intrepidity. And I will continue to speak up publicly against the abuse of power in the Church and in the Order of Malta.

Judge Not, Lest Ye Be Judged

The deceitful attitude of the American Association of the Order of Malta has been breathtaking. They are unable to argue in defense of their own code. Instead, they use the argument of authority (quia nominor leo) to silence members like me who speak up and, failing that, attempt to dismiss them through false accusations. It's a shame for such an honorable and heroic institution to have fallen so low. O tempora, O mores!

The deceitful attitude of the American Association of the Order of Malta has been breathtaking.

I remind the American Association, its president, executive secretary and the other members who comprise the Disciplinary Committee of paragraph XVIII of Bl. Raymond du Puy's rule: "Let no brother accuse another brother unless he be able to prove it; and if he shall accuse him and be unable to prove it, he is no true brother and should suffer the same penalty the accused would suffer if the accusation could be proved."

The members of the Disciplinary Committee of the American Association, its president, executive secretary and the others, should, therefore, be consistent with this rule and dismiss themselves.

Raymond de Souza, KHS, KofC, is a knight of the Equestrian Order of the Holy Sepulcher of Jerusalem, and a fourth degree Knight of Columbus. A speaker on pro-life and apologetics issues, he is the delegate for international missions of Human Life International. He has visited 38 countries of the six continents as part of conferences held in English, French, Spanish and Portuguese and has speaking ability in Italian and Afrikaans. On the recommendation of bishops and priests in New Zealand, Australia and the United States, he is available to address Catholic audiences anywhere in the free world to defend the gospel of life and the purity of Catholic doctrine. He has been a radio broadcaster in New Zealand and Australia and, today, writes a syndicated column for the weekly national Catholic paper, The Wanderer.
--- Campaign 32075 ---