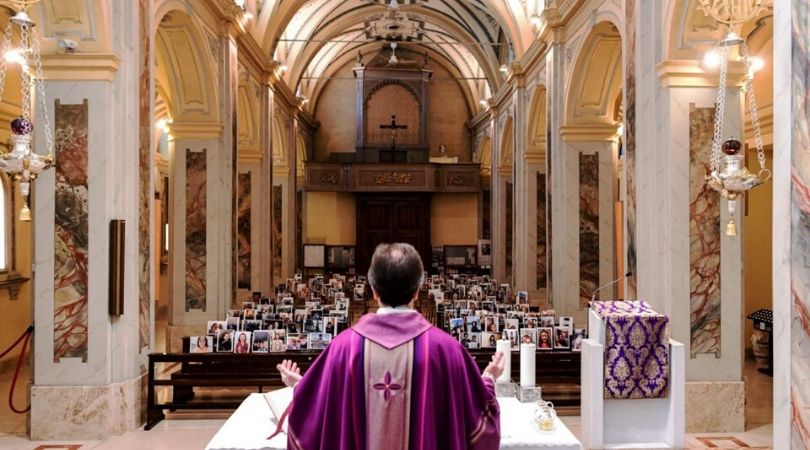 All Masses must be public

ROME (ChurchMilitant.com) - A Rome-based expert in canon law is calling time on the fiction of "private Masses" as a "nonsense" made up by bishops to justify the illegal banning of the faithful from participating in the Eucharist.

"The fact is that both theologically and canonically, there is no such thing as a private Mass. Strictly speaking, every Mass is public — because the offering of the Holy Sacrifice of the Mass is the Catholic Church's highest form of public worship, writes canonist Catherine Caridi, creator of the popular blog Canon Law Made Easy.

"This is, after all, how many bishops are phrasing the matter. They have told the faithful that 'public acts of worship' have been canceled."

"If you sense that there is something about the wording of these sorts of statements that doesn't feel theologically right, you're on to something," the canon law expert writes.

In an essay published Thursday, Caridi examines canon law, Vatican II, Church history and the Catechism of the Catholic Church, concluding that "the Church's teaching on this point has always been consistent: By definition, every Mass is public."

Slamming the novelty of digital Masses, the canonist points out that it is "nonsensical to claim, as many clergy are doing, that 'when you watch a Mass via livestreaming, it's the same as being present,' and 'Mass is being celebrated for everybody, it's just that you now attend Mass virtually rather than physically.'"

"'Attend' means exactly what everyone has always known that it means, being physically rather than virtually present," she insists.

Caridi, who holds a licentiate in Latin canon law and a doctorate in Eastern canon law, cites canon 837, which categorically states that "liturgical actions are not private actions" and because they, by "their nature entail a common celebration, they are to be celebrated with the presence and active participation of the Christian faithful where possible."

In the nearly 2,000-year history of the Catholic Church, no physical illness has ever theologically or canonically superseded the faithful's spiritual well-being.

She also cites canon 906, which emphasizes: "Except for a just and reasonable cause, a priest is not to celebrate the eucharistic Sacrifice without the participation of at least some member of the faithful."

The canonist argues that the pandemic does not constitute a "just and reasonable cause" for a priest not celebrating Mass in the presence of the faithful, since historically the situation of nobody else being present when a priest is celebrating Mass has "always arisen because there simply is nobody else in the vicinity."

"In other words, the problem arose only because the priest wanted/needed a congregation, and there just wasn't anybody available!" Caridi stresses.

In fact, in the 1917 Code of Canon Law, when the traditional Latin Mass was the norm, then-canon 813.1 stated unequivocally that a priest could not celebrate Mass without the presence of a 'minister' who would serve the Mass and make the responses.

A woman was allowed to make the responses, even though she was not permitted to serve the Mass or come close to the altar, Caridi explains.

"For generations, the Church's position was firm: If a priest wanted to offer Mass, there had to be at least one other person present. Otherwise ... the Mass could not be celebrated, period," she states, adding: "The 1917 code's refusal even to permit a priest to offer Mass in the absence of a congregation was actually much more stringent than the 1983 code's canon 906, which allows a priest to say Mass alone for a 'just and reasonable cause.'"

Illustrating from the life of Blessed Charles de Foucauld (1858–1916), who was unable to offer Mass regularly because of his apostolate as a hermit in northern Africa and because he was surrounded mostly by non-Christians, Caridi narrates how the priest petitioned Pope St. Pius X for a dispensation that would permit him to say Mass alone and "without a phone or any regular means of receiving mail, waited in his solitude for a long time, agonizing at his inability to offer the Holy Sacrifice of the Mass."

The Church's teaching on this point has always been consistent: By definition, every Mass is public.

The holy priest finally received the news of his dispensation on Jan. 31, 1908. "In the 20th century, when the Church began to relax the restriction that prevented priests from saying Mass alone, it was this kind of situation that it had in mind," Caridi reasons, summing up:

The allowance for a priest to say Mass alone 'for a just and reasonable cause,' found in the current canon 906, was never, ever in a million years meant to suggest that priests could celebrate Mass alone because they barred the faithful from attending Mass, when they were right there in the vicinity and wished devoutly to be present at the celebration!

The author of Making Martyrs East and West: Canonization in the Catholic and Russian Orthodox Churches concedes that churches can take appropriate precautions, such as sitting far apart, "but in the nearly 2,000-year history of the Catholic Church, no physical illness has ever theologically or canonically superseded the faithful's spiritual well-being."

Caridi notes legitimate instances of a priest celebrating Mass by himself, e.g. if a priest is traveling and says Mass in his hotel room.

Theologically, this does not mean that his Mass is "private," but "his Mass will end up being said all alone, simply because the general public is rightly unable to wander in and out of other people's hotel rooms."

Conversely, if a priest is saying Mass by himself in an open place other than a church, and people do happen to see him doing so and want to join him, they cannot be forbidden to do so, Caridi clarifies — as might happen on an empty dining room on a cruise ship.

"It's time to stop playing word games, and acknowledge that words like 'public' and 'private' and ... 'it's for your good,' have not suddenly acquired new definitions that they never had before," the canonist concludes, recalling Jesus' warning: "Let your 'Yes' mean 'Yes' and your 'No' mean 'No.' Anything more is from the Evil One."