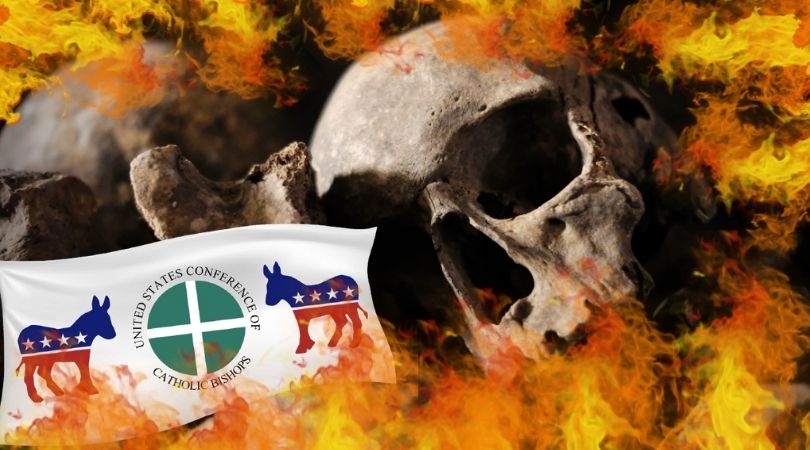 The slow-motion suicide of America's bishops

Our bishops serve Satan. That's the heartbreaking but inescapable conclusion of the past half-century's horrors. They do not oppose the killing of the unborn — at least, not with any vigor. They were enthusiastic coconspirators in the shutdowns of churches during the fake pandemic. They turn a blind eye to sodomized children, where they are not themselves doing the sodomizing, and they appear aloof and indifferent to the devastation wreaked on innocent souls by their sins of commission, and, much worse, sins of omission.

Our bishops permit sacrilege by politicians who publicly celebrate their own hideous sins, giving Holy Communion to abortion enablers. Then, they dishonestly pretend to be appalled, concocting toothless documents and statements designed to do nothing at all while superficially sounding stern. So low have clerical standards fallen, the debate about unrepentant sodomite Jeffrey Burrill, now known to the world forever as "Msgr. Grindr," is over whether journalists were right to use tracking technology to out him. Bitch, please.

Worst of all, our bishops claim authority thanks to an ordination they profane as yet another magical ritual, conferring a power they do not have. It is enough to drive anyone screeching in terror from the Catholic Church. And yet, we must endure, for the Catholic Church is the only church that holds all Western traditions together. Every evil in the world is defined in opposition to Rome. But this awesome and iconic majesty does not vest in the episcopacy, rather in the eternal truths the Bride of Christ holds in trust.

This awesome and iconic majesty does not vest in the episcopacy, rather in the eternal truths the Bride of Christ holds in trust.

Our Church is tainted and indecent, full of filth, nowhere more so than among the ranks of its most senior shepherds, who cannot even bring themselves to say out loud that there is no salvation outside of it. And yet, we must endure, even as we sit slack-jawed in disgust and horror watching pederasts pretend to ordain other pederasts. We wonder why their heads and hands do not spontaneously burst into flames, asking ourselves why God will not perform the sort of miracles he did in the Church's early years. We ask how it can be that the laity must sit back and tolerate it all.

A little history helps. Recall that many saints suffered indifference or even persecution from Church authorities, which teaches us that we can never expect to have many good bishops at once, and also that these leaders' failings never led those saints to indulge in self-pity or despair. So there's no reason you should either. Recall too that you are not alone in finding the state of the episcopate cause for misery. In one of his last interviews, Catholic novelist Walker Percy was asked by Crisis magazine what he thought about then-cardinal Ratzinger's comment that sometimes bishops must be martyrs, at least to public opinion. Percy's response: "Well, I'm sure he'd like to assist some of them."

Sometimes one feels the only good bishop is a dead bishop. Before you think I'm necessarily urging homicide, let me reassure you that I am mostly referring to how noble are the Church's bishop-martyrs, like St. Apollinaris, whose feast we celebrated Tuesday. Now admittedly, sometimes it may mean that some men elevated to this exalted rank will do much more harm than good until they expire. But do not despair. We need not send our bishops to the lions because they are doing something even more devastating to themselves.

It's not a secret that our bishops have squandered their moral authority. What's less obvious is how the consequences may play out. Because, while the Church is eternal, its dismal, corrupt, venal and petty bureaucrats are not. Although the episcopate looms large in Catholic life today, this was not always so. Our medieval tradition is monastic; the pope's function in the Middle Ages was to run the curia, and his office and its elections were a constant source of schism. The Holy Roman Emperors were constantly backing rival popes.

Not unlike college professors, doctors and journalists, each of whom are busy writing their own professional eulogies, unraveling their own legacies and authorities, bishops — through their complicity in and inaction over sin, simony and moral abomination — are unwittingly crafting a future in which they play a far smaller role than they might imagine, and far smaller than you and I might suppose. We are on the verge — you can see it everywhere — of a new, traditionalist culture, one that will dictate the future of our Catholic intellectual heritage, eclipsing meddling and mendacity from freaks in frocks.

We can't dispense with our bishops, but would be wise to recall what "bishop" is supposed to mean. Louis Hartman's tremendous Biblical encyclopedia explains that the word, which comes from the Greek episcopos, originally meant overseer. The New Testament explains that Paul would name overseers to run the churches he set up in various cities — Timothy and Titus are examples. Paul's letters to them explain how they were, in turn, expected to pick good bishops themselves. (In other words, if your church doesn't have bishops, it isn't scriptural. Sorry, Prots!)

I forget which brilliant Catholic mind it was who said, even as recently as John Paul II's heyday, that "the Church is not governed." He meant that the brilliant John Paul II, and the then-cardinal Ratzinger under him, both said wonderful things and taught anyone who'd listen — but they did not rule the machinery of the Vatican and could therefore not fix its deep systemic problems, including the mismanagement of funds at the Vatican Bank and the sex abuse crisis.

It is an unhappy reality of life as a political conservative that our enemies do so much more damage to themselves than we are ever able to inflict upon them.

John Paul II appears to have made a strategic determination, admirers such as George Weigel have long concluded, that he would fight communism and evangelize the world, but leave the everyday management of the Church to its permanent administrative class. Things were better in the Middle Ages, when religious houses fought for exemption from episcopal oversight. The bishops hated that. We have to go back. And the bishops are doing it for us, by making themselves irrelevant to the spiritual life of faithful Catholics — and even, in some cases, an obstacle to it.

Do you ever read about the saints in the Liturgy of the Hours on their feast days? If you do, I bet you've noticed how many of them are praised for reforming the Church of their day. What does this tell us? That most Church leaders, most of the time, are absolutely rotten. And indeed Our Lord suggested this to us, didn't He, by having none of his chosen Apostles distinguish themselves until after His resurrection. Even recent, great Churchmen, individually extraordinary in so many ways, haven't been the sturdy leaders the Church really needed: John Paul II didn't discipline the founder of the Legion of Christ, and even my beloved Benedetto resigned, like a selfish idiot, thereby clearing the way for ghastly Francis.

Church Militant's Baltimore rally and conference needs you, the faithful

It is an unhappy reality of life as a political conservative that our enemies do so much more damage to themselves than we are ever able to inflict upon them. Perhaps this is as it should be; the Devil always overplays his hand. But it surely is frustrating to those of us who, in our vanity, style ourselves "warriors for Christ." Seeking respite in Sun Tzu's famous injunction — "If you wait by the river long enough, the bodies of your enemies will float by" — feels like laziness, a capitulation.

We cannot know precisely how God's judgment will be meted out. But we can raise our voices in unison until the mighty tremble. Please consider joining us in Baltimore for Church Militant's prayer rally and conference, "Bishops: Enough is Enough." The rally is scheduled alongside the United States Conference of Catholic Bishops' General Assembly. The rally will be hosted by a sinner of no great consequence, but boasts a terrific lineup of thinkers, orators and investigators, which is growing all the time.

Confirmed speakers include Church Militant's own primus inter pares, Michael Voris, America's coolest priest, Fr. James Altman, Trump-whisperer Stephen K. Bannon, indefatigable reporter Michelle Malkin and many others — even aspiring amateur magician Patrick Coffin, who has promised to delight the faithful with a sleight of hand for which he is renowned across 11 parishes. We hope to see you there.

MILO YIANNOPOULOS is a New York Times-bestselling author, an award-winning investigative reporter, a reformed sodomite, a global political sensation, a free speech martyr, an accomplished serial entrepreneur, a hair icon, a penitent, and, to the annoyance of his many enemies, a happy person. Nicknamed the "pop star of hate" by jealous fatties in the media, Milo is the most censored, most lied-about man in the world, banned from entire continents for his unapologetic commitment to the sound of his own voice. His first book, Dangerous, sold a quarter of a million copies, despite never being reviewed in any major publication. Milo lives in Florida, where he is preparing to open a reparative therapy clinic for men plagued by same-sex attraction. He welcomes letters from readers, and can be reached at milo@churchmilitant.com.