Cdl. Burke on the Dubia One Year Later

Pleads with Pope for clarity amidst crisis over marriage and family

ROME (ChurchMilitant.com) - The former head of the Vatican Supreme Court is stressing the urgency of the pope to clear up widespread confusion over Amoris Laetitia one year since the public release of the dubia.

Cardinal Raymond Burke, former prefect of the Apostolic Signatura, said in an interview published Tuesday in the National Catholic Register that the gravity of the situation is "continually worsening." The doctrinal ambiguities in Amoris Laetitia, the pope's exhortation on marriage and the family published in April 2016, have led dioceses around the world to open Holy Communion for the divorced and civilly remarried.

Free clip from CHURCH MILITANT Premium
WATCH MORE LIKE THIS
Pleading on behalf of the Church, Burke stresses "how urgent it is that, in exercising the ministry he has received from the Lord, the Pope should confirm his brothers in the faith with a clear expression of the teaching regarding both Christian morality and the meaning of the Church's sacramental practice."
His Eminence adds that the prevailing misinterpretations are affecting the "deposit of faith," resulting in a "paradigm shift regarding the Church's entire moral practice." The confusion is "increasingly eroding" the meaning of the Church's sacramental practice, especially the sacraments of confession and the Eucharist.
On September 19, 2016, Burke, along with Cdl. Walter Brandmüller and recently deceased Cdls. Joachim Meisner and Carlo Caffarra, signed the dubia and hand-delivered it to the Pope.
Burke noted that he and Cdls. Caffarra, Brandmüller and Meisner appealed to the Pope for clarification of Church teaching on the dubia.
"Since the Petrine Office has the responsibility to teach the Catholic faith with integrity and thus maintain the unity of the bishops and all the faithful, the correction of the confusion and error is the responsibility of the Roman Pontiff," he remarked.
He described the idea that every word uttered by the Holy Father should be taken as doctrine as "absurd."
"The Church has historically been sensitive to the erroneous tendency to interpret every word of the Pope as binding in conscience," he observed, "which, of course, is absurd."
The 69-year-old prelate repeated in an interview November 2016 that Pope Francis' apostolic exhortation is not magisterial: "[It] contains serious ambiguities that confuse people and can lead them into error and grave sin."
The document is instead a reflection of the Holy Father on the work of the last two sessions of the Synod of Bishops. "In other words," Burke clarifies, "the Holy Father is proposing what he personally believes is the will of Christ for His Church, but he does not intend to impose his point of view, nor to condemn those who insist on what he calls 'a more rigorous pastoral care.'"
In another interview November 2016, His Eminence remarked on the extraordinary step of seeking a formal correction of the Pope, unless he clarifies his position: "There is, in the Tradition of the Church, the practice of correction of the Roman Pontiff. It is something quite rare. But if there is no response to these questions, then I would say that it would be a question of taking a formal act of correction or a serious error."
In June, the four cardinals released a letter to the Holy Father requesting a private audience to discuss the "confusion and disorientation" within the Church surrounding the exhortation.
The dubia (Latin for "doubts") are five formal questions directed to the Pope, aimed at eliciting a "yes" or "no" response. A long-established method directed at clarifying issues of doctrine and practice, the cardinals are concerned with paragraphs 300–305 of Amoris Laetitia concerning the admittance to Holy Communion of persons living in an objective state of sin, and its consistency with papal teaching.
In an interview in August with The Wanderer, Burke re-emphasized the worldwide confusion that has resulted since the publication of the pope's apostolic exhortation:

Since the publication of Amoris Laetitia, I find that the situation has only worsened. I often say that priests are the ones who suffer the most; they are the ones who have direct contact with the lay faithful who approach them and ask them to things they simply cannot do. When faithful priests explain to the people why they are unable to fulfill their requests, they are accused of going against the Pope, of going against this so-called new direction in the Church.

Further, Burke adds that the lack of clarity and ambiguity extend also to absolute moral norms that prohibit intrinsically evil acts and are binding without exceptions.
Since the publishing of Amoris Laetitia, bishops and bishops' groups in Argentina, Malta, Germany and Belgium have issued pastoral instructions that allow for civilly divorced and remarried Catholics living in adultery to receive Communion, contrary to longstanding Church teaching and practice. Bishops in Canada and Poland, however, have issued statements reaffirming Church teaching.
More than 250 academics and priests signed a filial correction addressed to Pope Francis in July over some serious misgivings about the effects of these passages in the document. No answer has yet been received from the Holy Father.
Its Latin title, Correctio filialis de haeresibus propagatis ("A filial correction concerning the propagation of heresies"), states that the pope has, by Amoris Laetitia, and by words, deeds and omissions, may have upheld seven heretical positions about marriage, the moral life and the reception of the sacraments, causing such heretical opinions to propagate in the Church.
The letter was originally delivered to Pope Francis on August 11, but after no response from the Holy Father, the signatories publicly released it on September 24.
"No similar action has been taken since the Middle Ages," according to the correction. Pope John XXII in 1333 was reproved for errors, which he later renounced on his deathbed. However, in the present situation, "the spiritual sons and daughters" of the Holy Father accuse him of potentially promulgating teachings contrary to the Faith.
Cardinal Burke's final plea for clarity has yet to be answered by Pope Francis.
--- Campaign 31877 --- 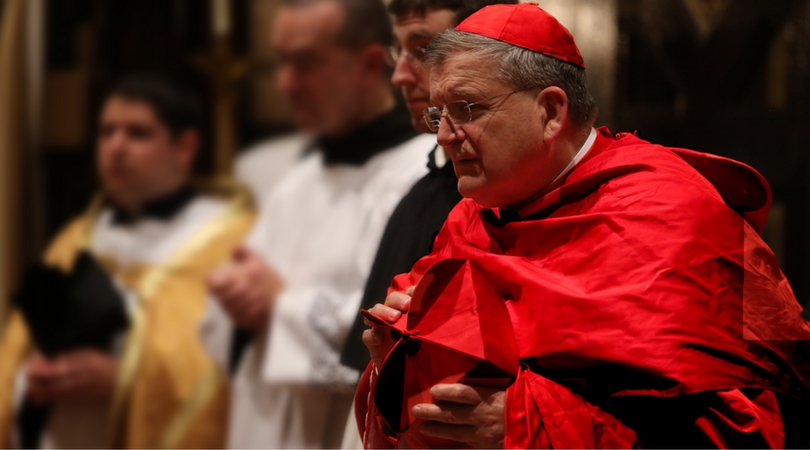 Campaign of Insults Against Cdl. Burke Continued Over Christmas
By Deacon Nick Donnelly   •   0