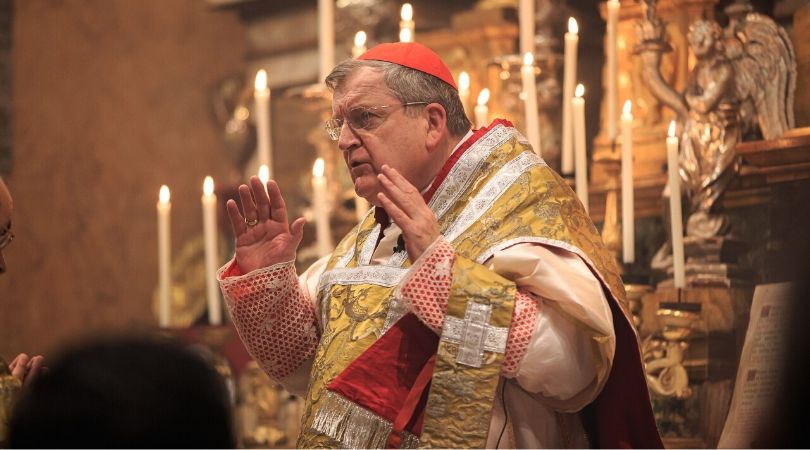 Principled critics of the pope are being painted as reactionary bigots

On Nov. 10, Ross Douthat published an interview with Cdl. Raymond Burke, in which His Eminence commented on the problem of what to do if Pope Francis published, with his full authority, a plainly heretical document. The cardinal said, "to be honest with you, I don't know how to address such a situation. As far as I can see, there's no mechanism in the universal law of the Church to deal with such a situation."

Cardinal Burke's perplexity relates to two phenomena: On the one hand the theological problem, which has never been resolved, of how to resist, or even depose, a heretical pope; on the other hand the day-to-day question of how to respond to the ever more blatant heterodoxy of Pope Francis' papacy.

A red herring is being drawn by the current talk of schism.

On the theological question, I would just like to say that a red herring is being drawn by the current talk of schism, as coming from one wing of the Church or another. Cardinal Burke implicitly accepts this language when he says, regarding the contingency of rejecting a papal document that defects from the apostolic tradition, "my point would be the document is schismatic. I'm not." And he accepts the implication that the Pope, in such a case, would be leading a schism.

I find this not a very useful way of looking at things. It could be said, for example, that Pope Honorius in the seventh century, when he separated himself from previous papal teaching on the heresy of Monothelitism, was putting himself in schism with the Church of the past (or that of the future, which condemned him as a heretic); similarly the Council of Constance, when in 1414 it issued the decree Sacrosancta, declaring a general council superior to the pope, would have been putting itself in schism with the Church of the past.

This, however, is not what is usually meant by schism, and I do not find it a useful category to apply either to the Church authorities who may be guilty of it or to the Catholics who, in such a case, might openly resist it. I deprecate the word especially because the cheerleaders for Pope Francis have recently taken it up to throw at the orthodox, whom they have taken to describing as de facto schismatics. This party, which up to 2013 was all for liberty and independence, has now raised licking the Pope's boots into a theological principle. It would be playing into their hands to adopt their terminology.

In any case it should be pointed out that the Church has not declared the Society of St. Pius X to be in formal schism,* although they have set up a clerical organization with illicitly consecrated bishops, which is well beyond what Cdl. Burke or Bp. Schneider, for example, might conceivably think of doing. Indeed, under canon law, formal schism requires more fundamental rejection of papal authority than that.

So I turn to the practical question of what Cdl. Burke or other prelates can do in the face of Pope Francis' aberrations. The first thing we should do is recognize that the Church in the past had a far healthier approach to rebuking a bad pope than the spineless episcopacy of today. We can cite the case of Pope Urban VIII (1623–44), who may be compared to Francis in being the most despotic and politically minded pope of his time.

Urban was not guilty of any doctrinal error, but he scandalously refused to support the Catholic cause of Spain and Austria against the Protestant incursion that Swedish armies were conducting at that time into the Catholic lands of central Europe. This dereliction stirred warm indignation among the cardinals; in March 1632 Cdl. Borgia read out a formal protest in consistory, with a group of cardinals crowding round him to prevent the Pope from silencing him. Shortly afterwards Cdl. Ludovisi threatened to depose Urban as a protector of heresy, and was banished from Rome for his pains.

Unfortunately, today's cardinals notably lack the guts of those of 1632. If Cdl. Burke were to read out a protest against the Pope, he would certainly not have a knot of cardinals to support him. A great difference too is that Urban VIII did not have at his service groveling propagandists such as Fr. Antonio Spadaro or Austen Ivereigh. On the contrary, there was the irreverent tradition of the pasquinades, which used to appear openly in Urban's own city, and one of which dared to ask: "Is His Holiness by chance a Catholic?" If only we had one tenth of that critical independence today!

Unfortunately, today's cardinals notably lack the guts of those of 1632.

My point is that Cdl. Burke is too isolated today to make an effective protest against the papal dictatorship. Under Pope Benedict, he was deservedly one of the most respected prelates in the worldwide Church; he had been made archbishop of St. Louis, Missouri by John Paul II, and Benedict created him prefect of the Signatura, one of the most responsible offices in the curia.

His transition from that status to his present one of an ecclesiastical pariah and right-wing bogeyman is one of the many aspects of the revolution that Francis has wrought in the Church. Moreover the very essence of Pope Francis' revolution has been to court popularity with the world's media, both its secular majority and its supposedly Catholic section. Anyone who criticizes him can therefore automatically expect to be depicted as a reactionary bigot.

There are many cardinals and bishops who secretly see that Cdl. Burke and Bp. Schneider are voicing the tradition of the Church against an unprecedented onslaught, but they are too frightened of the dictatorship to speak out. For the moment, all that prelates can do is to continue making their principled declarations, in the face of widespread cowardice or hostility. Fidelity to Catholic orthodoxy demands it, and those who remain faithful Catholics note it with gratitude.

But we should also take the long view and remember that, when dictatorships fall, they fall tumultuously. The adulation that surrounds their leaders is turned to obloquy; and those who showed a courageous front against them come into their own.

*Church Militant's position is that the SSPX, while not in formal schism, is in material schism.