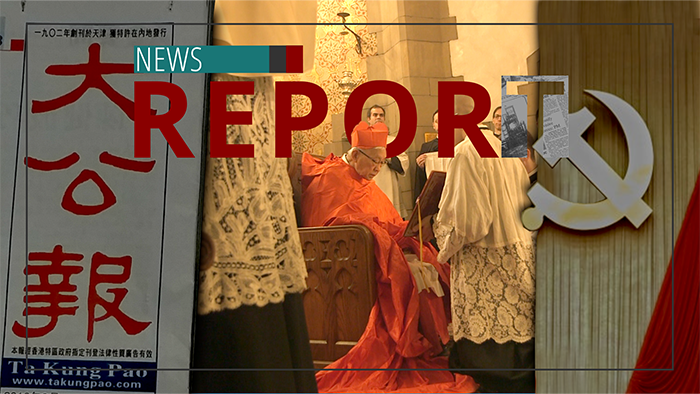 One of China's two living cardinals is the target of a communist smear campaign. In the past several years, the Chinese Communist Party has been chipping away at Hong Kong's autonomy, suppressing the region's legislature and judiciary, plus its freedoms of speech, press and assembly. Church Militant's William Mahoney looks at how the CCP now has its sights on Hong Kong's religious freedom.

Since the British empire transferred Hong Kong to China in 1997, the autonomous region has been self-governed by the principle of "one country, two systems." But CCP ambitions have surged under China's president, Xi Jinping, driving mainland China to disregard this principle.

One of the biggest remaining threats for the CCP is religion, especially Catholicism, which is why the communists are targeting one of Catholicism's biggest voices in the region, Cdl. Joseph Zen.

With Pope Francis' Vatican reportedly taking $2 billion a year from the CCP, and the secret Vatican–China accord in effect since 2018, an emboldened China is moving full steam ahead against the Church.

The piece claims Cdl. Zen used his status as a clergyman to engage in anti-China and chaotic activities in 2019, activities it calls the "black violence."

The so-called black violence was a series of demonstrations in Hong Kong from 2019 to 2020 against the CCP's legislative encroachment on the region's autonomy. The 2019 extradition law was scrapped, but, in 2020, the national security law established an office outside of Hong Kong jurisdiction to enforce crimes of secession, subversion, terrorism and collusion with foreign organizations.

The law permits surveillance and detaining of suspects and forces regular and digital publishers to block, remove and restrict content the CCP deems illegal.

The pro-Beijing piece also smears Cdl. Zen for his friendship with Jimmy Lai, a devout Catholic currently behind bars as one of the national security law's first victims. Lai's newspaper, Apple Daily, was forced to fold in 2021 when the same security law was used to freeze the company's assets.

Ta Kung Pao is based in Hong Kong, where the paper has been spreading CCP propaganda for decades.

For now, many consider Cdl. Zen a "white martyr." And while tyrannical kingdoms come and go, the martyr's crown endures for eternity.

The article against Cdl. Zen also attacks Falun Gong, a Chinese religious movement that began in the '90s. Falun Gong is behind The Epoch Times, which is known for honest reporting on politics — making it an obvious enemy of the CCP.