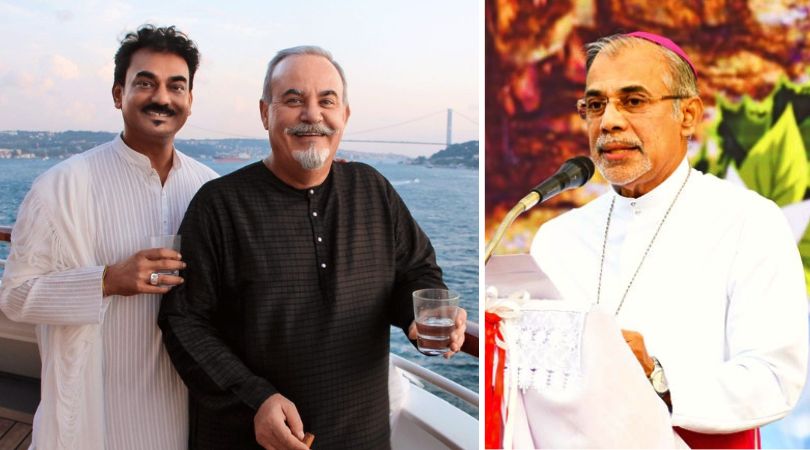 Head of Indian bishops' conference silent on prelate with 5 mistresses

PANAJI, India (ChurchMilitant.com) - A senior prelate who twisted canon law to justify a Catholic funeral for an unrepentant homosexual icon will be made a cardinal by Pope Francis on Saturday.

Filipe Neri Ferrão, archbishop of the former Portuguese colony of Goa, told Catholics who were scandalized by the funeral Mass offered for Wendell Rodricks that not giving the gay fashion designer a Catholic burial would have triggered an even greater scandal.

In 2002, Rodricks made history after entering into the first legal same-sex union on Indian soil with his long-term French partner, Jerome Marrel. The "wedding" was conducted at the French embassy under French law.

Columnist Premankur Biswas called Rodricks and Marrel "India's first official gay couple." Rodricks later appeared on national television to "show the younger generation it was possible to have a long love life and celebrate it."

Rodricks said his French civil union (pacte civil de solidarité) was "totally liberating" and "a source of great solace, dignity and honor." He bragged about "proudly" carrying the "gay marriage" document with him for the next two years when he traveled.

In 2018, the celebrity met Cdl. Oswald Gracias, one of Pope Francis' most trusted advisors and persuaded him to bless a hotline for LGBT Catholics. Rodricks told UCA News that he attended Mass daily and was "moved to tears" when the cardinal blessed the new venture.

We can no longer think that 'everything is black and white.'

"I don't want them to go through what I went through. I felt like a sinner, that I was not worthy to be Catholic, and I lived in guilt and shame because of the condemnation," said Rodricks, who grew up in the land evangelized by the Jesuit missionary St. Francis Xavier.

Rodricks and Marrel lived together for 37 years until Rodricks' untimely death in 2020. He was 59 years old. Faithful Catholics objected that Abp. Ferrão was violating canon law by solemnizing the homosexual activist's funeral. According to canon 1184, Church funerals are to be denied to unrepentant manifest sinners because, among other reasons, it would cause public scandal to the faithful.

Writing to faithful Catholics Valentine and Anna Coelho, the archbishop explained how even in the case of a "manifest sinner," the person "can be granted a Church funeral if he shows some signs of repentance before death." However, if the sinner remained unrepentant, "he was not to be denied a Church funeral if there was no public scandal."

In fact, the funeral has not caused any scandal to the public. On the contrary, the requiem service was attended by a large number of parishioners and others. In this situation, the denial of an ecclesiastical funeral would have caused more hurt and scandal to the people than granting it.

Ferrão cited Francis' apostolic exhortation Amoris Laetitia, stressing: "We can no longer think that 'everything is black and white' and apply moral laws as if they were 'stones to throw at people's lives'" (§305).

"It is not about undermining the teaching on sin but putting into practice the merciful pedagogy of God," the prelate added.

It seems we are living in the period of the Old Testament book of Judges when there was no king, and every man did what was right in his own eyes. Here is a man who lives in defiance of the Bible and Church teaching. Archbishop Ferrão has betrayed the Bride of Christ for the zeitgeist of the sexual revolution just at a time when it is ensnaring the youth of Goa.

He turns canon law on its head in this case. He will not do the right thing for fear of public opinion. He argues that public opinion can override public scandal! Two years down the line, these same public [sic] has taken his silence for consent. Gay-pride month was observed in several Catholic institutions in Goa.

Locals complained to Pope Francis, citing his eco-encyclical, Laudato Si, and blasted Ferrão for selling agricultural land on the island of Vanxim to be converted into a "luxury hotel, luxury villas, golf course and club, private marinas and casinos."

He argues that public opinion can override public scandal.

Members of the Mumbai Association of Concerned Catholics also slammed the archbishop for remaining tight-lipped on the scandals rocking the Indian church. These scandals were brought to light by Church Militant's exposé of the rogue bishop of Mysore, K.A. William.

Bishop William has been accused of murdering four priests who opposed him. He's also been accused of rape, sodomy, kidnapping, embezzlement and fathering at least two children through five mistresses.

Ferrão, who is president of the Latin-rite Catholic Bishops' Conference of India, has failed to intervene, despite dozens of desperate letters from priests, lay leaders and distinguished Catholics, including veteran judge Michael F. Saldanha.

"William bought Ferrão's tongue by sending him a huge donation of 500,000 rupees for a CCBI project. Most bishops contributed 100,000 rupees, but William outdid them," a priest from Mysore diocese told Church Militant.

In a letter obtained by Church Militant, William wrote to Ferrão stating that the money is "for financial support towards the extension of the CCBI secretariat office in Benaulim, Goa."

In 2020, Pope Francis announced the appointment of several leading pro-LGBT bishops as cardinals. Among the "pink prelates" were Abp. Wilton Gregory of Washington, D.C. — identified as a homosexual by priestly sex abuse expert Richard Sipe. Gregory is also a close ally of laicized homopredator Theodore McCarrick.

Francis will create 20 new cardinals during the consistory on Saturday. This will increase the number of cardinal electors appointed by him to 83 — raising the likelihood of a papal successor who will follow the vision and methodology of the present pontiff.

Among those who will be given a red hat is Bp. Robert McElroy of San Diego, who covered up for Fr. Jacob Bertrand, after the diocesan priest desecrated the Blessed Sacrament in a perverse act of sex abuse that was part of a satanic ritual in preparation for a black mass, Church Militant reported.