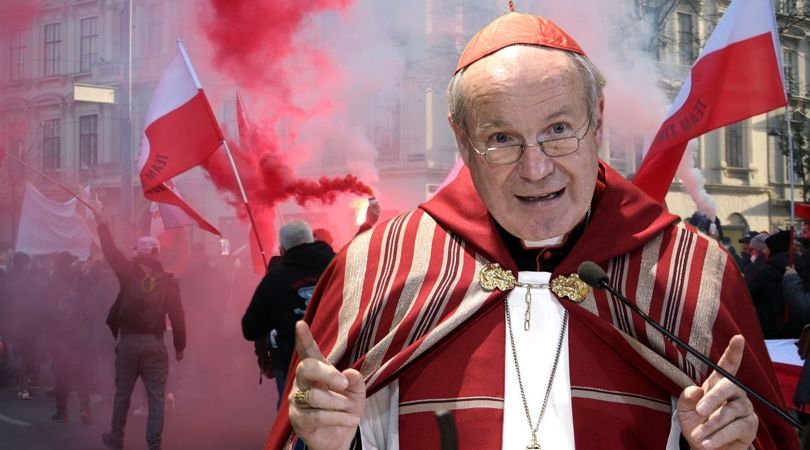 Heterodox prelate sides with State as Austria descends into dictatorship

VIENNA (ChurchMilitant.com) - The archbishop of Vienna, notorious for defying Church teaching, has sacked a faithful deacon from his role as police chaplain in retribution for the deacon's protesting the China-virus dictatorship engulfing Austria.

Austrian cardinal Christoph Schönborn, who promotes blasphemy through heavy metal Masses and homosexual activism, wrote to Dcn. Uwe Eglau Wednesday, dismissing him from his duties as "honorary deacon in the police chaplaincy, with immediate effect."

In a letter, Schönborn censured Uwe's "public statements of opinion regarding the government's measures to combat the corona pandemic in the form of an open letter to the federal minister of the interior" and his "public appearance at the corona demonstration on Jan. 15."

The cardinal explained that the deacon's actions "are likely to be misunderstood as the official position of the Catholic Church and thus to cause further damage to the relationship of Church and State in the area of police chaplaincy, which is based on mutual trust."

In the face of fierce protests, Austria's Parliament passed a vaccine mandate Thursday, requiring all adults in the country to get vaccinated against COVID-19 beginning in February.

"The Church is a partner of God and of people and, hopefully, not of the State. We had that too often and for too long," Dcn. Eglau, a psychotherapist, told Church Militant.

Alexander Tschugguel speaks at the Jan. 15 protest in Vienna

"I have been a voluntary police chaplain in Vienna since 2007. In 2009, I was ordained a permanent deacon," Eglau said. "Our letter from concerned police officers asked the federal minister of the interior [to] stand against compulsory vaccination and the division in society and the police."

On Tuesday, a day before Eglau was fired, he and two police officers co-authored a letter to Interior Minister Gerhard Karner on behalf of 600 police personnel, warning of a split in society and in the police force in view of the planned compulsory vaccination.

The letter noted that the signatories have "concerns about the rule of law, freedom of expression and fundamental rights, as well as health"; it warned Karner he would lose "numerous motivated, committed and qualified officials" over the jab mandate.

This is, historically, deeply worrying and very wrong.

"When Cdl. Schönborn relieved the deacon from his duties, he used an argument that is poisonous for our country," Tschugguel said. "The cardinal insisted that he was protecting the alliance between State and Church, revealing that he is working as an extended arm of the government."

"This is, historically, deeply worrying and very wrong," Tschugguel remarked, alluding to the Austrian Catholic hierarchy's support for Hitler under the National Socialist regime.

Earlier, Tschugguel told Church Militant that he was prohibited by Austrian law from drawing any comparisons between the prevailing health dictatorship and Austria's capitulation to Hitler in the Third Reich.

During the Anschluss, Austrian bishops signed a document declaring themselves supporters of National Socialism and asked Catholics to vote in favor of joining the German Reich.

A protocol of the Austrian bishops' conference (dated March 20–21, 1939) stated: "Fiftieth birthday of Der Führer — agreement on: sounding of the bells every quarter of an hour on the preceding Sunday, and a sermon with prayer for fatherland and Führer."

I must resolutely reject your unacceptable comparisons with National Socialism.

"Austrian Catholic bishops sure have form when it comes to siding with authoritarian regimes," Jewish anthropologist Karen Harradine told Church Militant. "Why is their response to heinous regimes one of support first and question later? They need to learn that if countries don't honor democracy and freedom, they are always plunged into darkness."

In December, the Austrian bishops' conference issued a statement championing the State's "temporary legal obligation to vaccinate," emphasizing that the government has full discretionary power to decide if a vaccine mandate "is now the appropriate means to protect the common good," Church Militant reported.