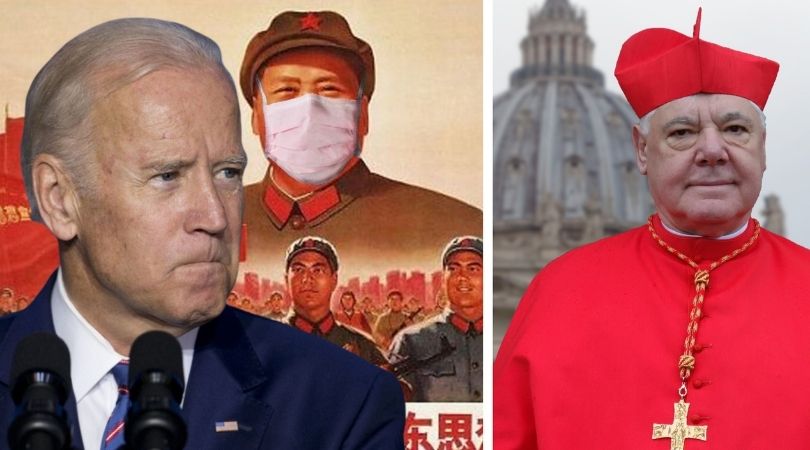 ROME (ChurchMilitant.com) - In an unprecedented intervention into the U.S. election debate, a top cardinal is warning of dire global consequences if Americans vote for a presidential candidate with a communist, abortionist and gender ideology agenda.

"First, the 'yes' to life against abortion, second, freedom of religion against the mainstreaming of gender ideology, and third, the mission of the U.S. to defend democracy and human rights against dictatorships."

"American Catholics, Christians of other denominations, and all people of faith must render an account to God over whom they make commander of the flagship of the free world," the former prefect of the Congregation for the Doctrine of the Faith (CDF) said Thursday.

"The outcome of the U.S. election will determine whether the U.S. remains the leading power in the world — for freedom and democracy — or whether a communist dictatorship will assume that role for the global community," Müller underlined.

"In China, the motto of Nazi Germany is repeated: You are nothing — the state is everything. And yet the truth is the other way around: people are everything and the state exists only to serve the common good," he stated.

In China, the motto of Nazi Germany is repeated: You are nothing — the state is everything.

"No government has the right to arbitrarily arrest and even torture its citizens, to brainwash them, to hold them in concentration camps, to murder them, to harvest their organs like spare parts and sell them on the world market," he noted, referring to the persecution of Uighur Muslims, Catholics, and Falun Gong practitioners.

In a not-so-subtle reference to Pope Francis' capitulation to China, the cardinal urged "the leaders of the Catholic Church" to "see the deeper dimensions of what is at stake at this moment in world history rather than offering a judgment based on subjective sensibilities and ideological preferences."

"As Christians, we must insist on the truth of the absolute value of every individual person, especially for the people of China and freedom of religion must be guaranteed in theory and practice," he asserted.

"The rivalry between the U.S. and Communist China is not a sporting competition for the first or second place of superpowers" but is "about the irreconcilable alternatives of democracy or dictatorship," Müller maintained.

"Because the U.S. is the first power in the free world, it must also put a stop to the imperialist grip of a communist superpower that seeks world domination and allow the Chinese people and other oppressed peoples to enter the community and solidarity of free peoples," he added.

Debunking the myth of the "seamless garment" promoted by many U.S. bishops, the cardinal lashed out at the moral equivalency liberal Catholics are attempting to draw between abortion on the one hand and immigration, climate change, healthcare and poverty on the other.

You can't compare apples to oranges. The human right to life is so fundamental that it cannot be equated with other political issues.

"You can't compare apples to oranges. The human right to life is so fundamental that it cannot be equated with other political issues," he categorically declared. "According to Catholic teaching, not all issues have the same weight."

"Therefore, a candidate who does not clearly oppose abortion and euthanasia is unelectable for a person who believes in God, and especially for every Catholic, because abortion is a heinous crime against the life of the person and against God, the creator of every human life," he added.

Also, issues like immigration could "be legitimately debated, like the border wall with Mexico," he observed, "but not the lives of unborn children, without being complicit in their murder" since "the moral law declares a categorical 'no' to the killing of children in the womb, handicapped children after birth, and sick and elderly people."

"A candidate must be fundamentally assessed as to whether he or she fully recognizes and is prepared to uphold human rights, beginning with the right to life," he stressed, for "anyone who subordinates the right to life to other objectives undermines democracy itself, which is not based on changing majority opinion, but on inalienable human rights."

"The world is looking to America because this fateful election will determine the future of democracy and human rights for decades to come," the cardinal said.