Event will include gay Mass

NEWARK, N.J. (ChurchMilitant.com) - A New Jersey cardinal is giving the go-ahead to an LGBT pilgrimage and Mass at his cathedral. The Cathedral Basilica of the Sacred Heart of the Archdiocese of Newark, New Jersey, is hosting the retreat and Mass on May 21, followed by a tour of the cathedral building. The event is sponsored by gay parish ministry groups attached to two New Jersey parishes: the Church of the Sacred Heart in South Plainfield; and the Church of the Precious Blood in Monmouth Beach, 59 miles away from the cathedral. 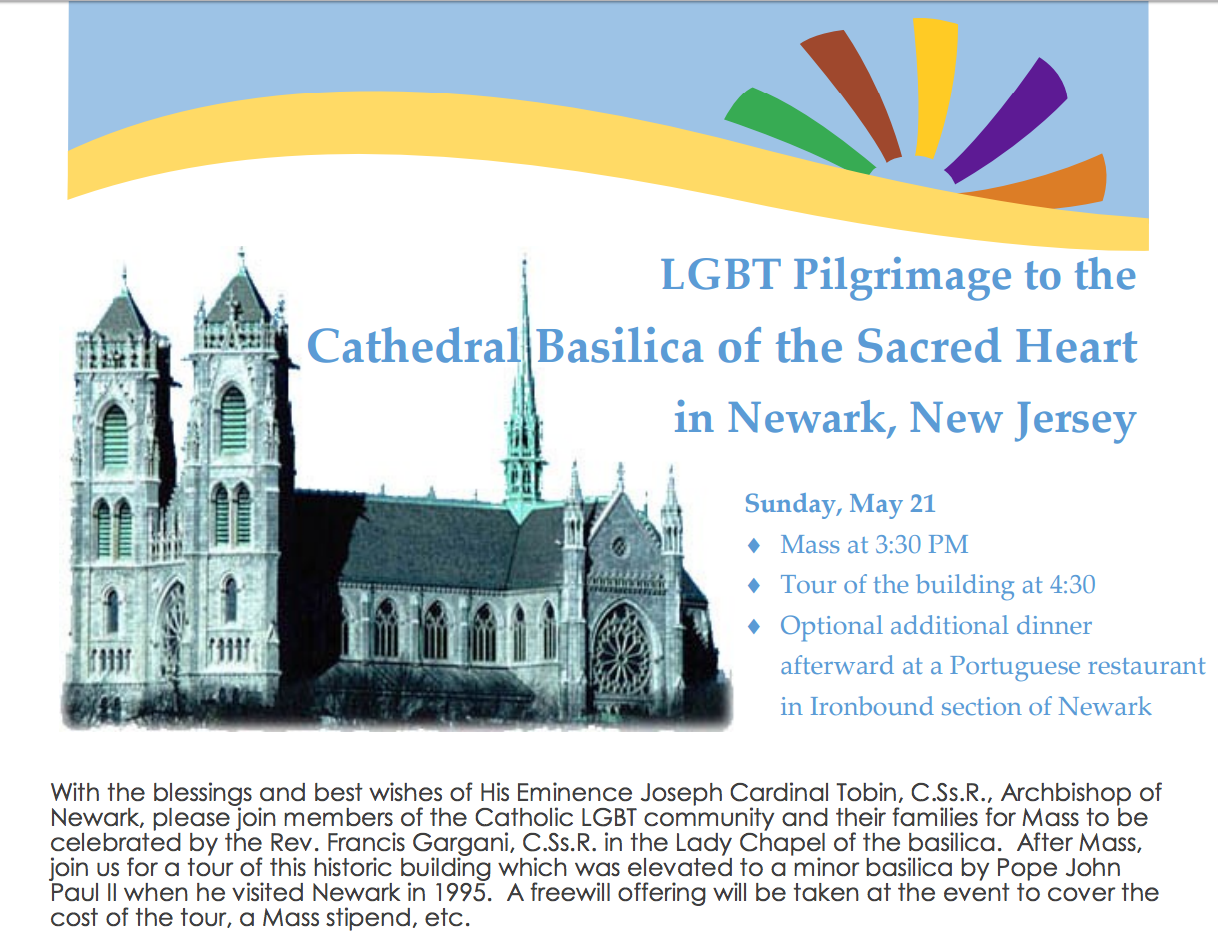 The flyer for the event, accessible through the Sacred Heart parish website, says the retreat is taking place "[w]ith the blessings and best wishes of His Eminence Joseph Cdl. Tobin, C.Ss.R." Church Militant confirmed with the parish priest at Sacred Heart, Fr. John Paul Alvarado, that Cdl. Tobin did give his personal approval for the event. When asked what the purpose of the LGBT pilgrimage was, Alvarado evaded answering, and also refused to give a clear answer whether the event would be promoting chastity based on Church teaching. Alvarado further rejected the notion that the LGBT pilgrimage could be a cause for scandal.

The LGBT Mass will be said by Redemptorist priest Fr. Francis Gargani, who has hosted such Masses in the past. In an interview in May 2016 with the dissident National Catholic Reporter, Fr. Gargani said, "I had the privilege of collaborating recently with a talented team offering a day of prayer and reflection for the LGBT community of New Jersey and will do so for an upcoming June retreat."

Church Militant reached out to Jim Goodness, director of communications for the archdiocese of Newark, to confirm that Cdl. Tobin had given his blessing on the pilgrimage. Goodness admitted knowledge of the event but refused to confirm or deny Tobin's blessing on it.

Both parishes hosting the pilgrimage have parish "gay ministries" called respectively In God's Image at Sacred Heart and LGBT Faith-Sharing Ministry at Precious Blood. The latter group's website reads in part, "We seek to engage the larger community in recognizing that we are all members of God's family nad [sic] that we each have a place at the table of the Lord."

In God's Image states on its website, "We acknowledge and respect the teaching of the Roman Catholic Church and strive to create an environment where people may honestly and faithfully share their stories."

Cardinal Tobin was among a handful of prelates who have publicly lauded the soon-to-be-released pro-gay book by Jesuit celebrity priest Fr. James Martin, saying, "Fr. Martin's brave, prophetic and inspiring new book marks an essential step in inviting church leaders to minister with more compassion and in reminding LGBT Catholics that they are as much a part of our church as any other Catholic."

Cardinal Tobin is also among the few prelates to publicly criticize the dubia cardinals, calling the critics of Amoris Laetitia "naive at best."

Both Cdl. Tobin and Fr. Gargani belong to the Redemptorist Order, founded by Doctor of the Church St. Alphonsus de Ligouri. Saint Alphonsus said about sodomy in his 1759 document Homo Apostolicus, "Sodomy involves a special deformity."