Cardinal Zen: Rome Has ‘Sold Off the Chinese Church’ 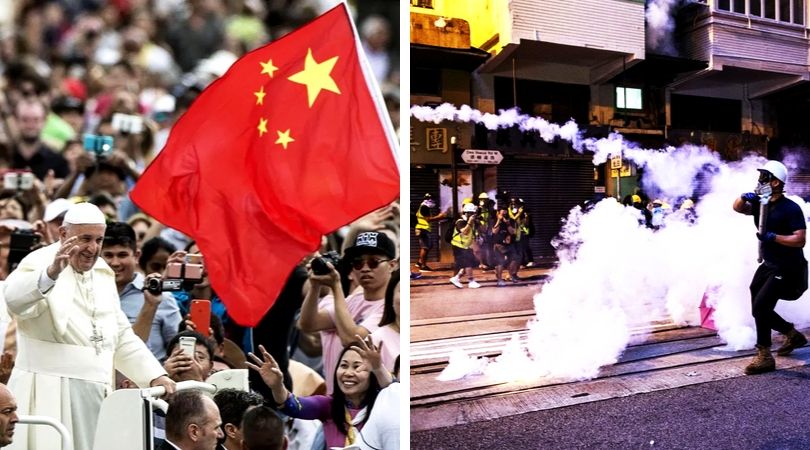 HONG KONG (ChurchMilitant.com) - Cardinal Joseph Zen is again criticizing the Vatican for its silence with regard to the plight of Chinese Catholics.

In a recent interview with La Vie, the Hong Kong prelate spoke about the Anti-Extradition Law Amendment Bill Movement in Hong Kong and the Vatican's response.

"Not a word has come out of the Holy See since the beginning of this mobilization," said Zen. "Rome no longer dares to criticize the Chinese government, to which it has sold off the Chinese Church."

Rome no longer dares to criticize the Chinese government, to which it has sold off the Chinese Church.

The movement in Hong Kong has intensified since the police raided a subway train Aug. 31.

Cardinal Zen explained to La Vie that, in Hong Kong, there are six officially recognized religions that the Chinese Communist Party (CCP) manipulates through the United Front Work Department, a CCP agency that handles relations with influential individuals and organizations inside and outside China and that absorbed the State Administration for Religious Affairs in 2018.

These organizations have been publicly calling the people to restrain themselves, which Zen called "comedy" since the people are already fairly calm in their protests against the courts and the police.

Regarding the Catholic Church in Hong Kong, Zen noted that the diocese has shown clear support for protestors' demands in their last statement through the Justice and Peace Commission, a commission that consists of 9–18 Catholics that the bishop of the diocese of Hong Kong has appointed as authorized representatives of the diocese.

Zen further noted that Hong Kong Auxillary Bp. Joseph Ha is particularly active in supporting the movement: "Bp. Joseph Ha participates in the marches [and] calls [people] to pray for peace against injustice and corruption."

Ha has been a strong voice and a good leader for Catholics, according to Zen: "Many people hope that he will become the next bishop, but it will not be him because he is too critical."

Regarding his own participation, Zen said: "As for me, I am very old, but I continue to express myself because there are not enough voices."

Zen explained that, though the movement does not have an official leader, Catholics are more mobilized:

This time, there is no longer an established leader and I see that Catholics are more mobilized. The association of Catholic students is very active, for example. Of course, Protestant demonstrators are more numerous, which is logical: the government counts 500,000 Hong Kong Protestants and 400,000 Catholics among the population.

You should know that many Hong Kong people receive a Catholic education, from primary to high school, because traditionally, the Catholic Church manages this part of schooling. They appreciate a certain conservative tradition of the Catholic school, even if the religious influence is reduced. Protestants have three recognized universities. And it's still at the university that convictions, ideals are forged. In 2014, after the Umbrella Revolution, many students were asleep, manipulated by the government or ended up in jail. This extradition bill, now withdrawn, has awakened everyone.

While the Catholic Church in Hong Kong is supportive, and many Catholics are mobilized, the Vatican continues its silence amidst the protests.

There will be a consistory in Rome for new cardinals and elders Oct. 5. Zen wishes to be present for that.