Cdl. Zen: Pope ‘Shutting Down’ Work of Predecessors in China 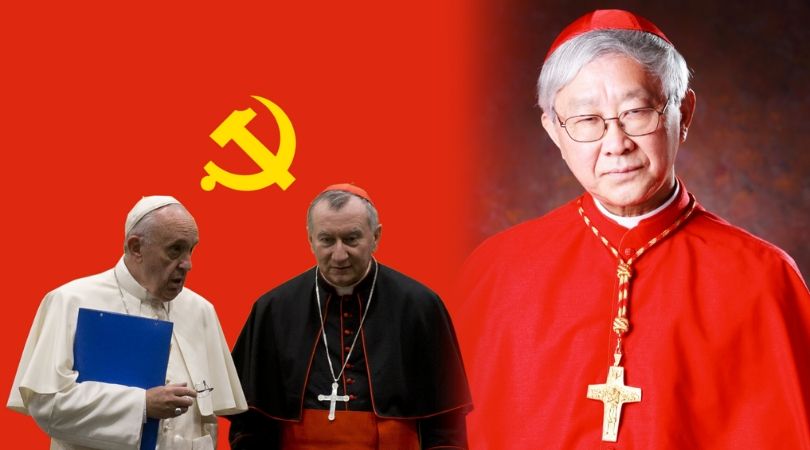 HONG KONG (ChurchMilitant.com) - In a recent interview with New Bloom, Cdl. Joseph Zen discussed the worsening plight of the underground Catholic Church in China and described how Pope Francis is "shutting down" the work of John Paul II and Benedict XVI.

After providing some historical background on the relationship between the Vatican and Communist China, Cdl. Zen talked about the situation coming to a head under Pope Francis' pontificate and deteriorating in the wake of the surreptitious 2018 Vatican-China agreement.

"But what is happening now? Francis came. Now I'm sorry to say that I think you can agree that he has low respect for his predecessors," said Cdl. Zen.

Now I'm sorry to say that I think you can agree that he has low respect for his predecessors.

Cardinal Zen explained that the Vatican-China agreement was in the works nine years ago: "In the year 2010, Parolin and Dias, they agreed with the Chinese part on a draft. And so everybody started saying, 'Oh, now an agreement is coming, it's coming, it's coming.' All of a sudden, no more voice."

He believes Benedict XVI refused the accord, which is the same one that Francis has approved.

"I have no evidence, but I believe that it was Pope Benedict who said no. He could not sign that agreement. And I think the one agreement signed now must be exactly that one, which Pope Benedict refused to sign."

The details of the secretive Vatican-China pact are unknown, even to Cdl. Zen.

Asked if he had seen the agreement, he said: "No! I ask you, if that's fair. I am one of the two living Chinese cardinals and I cannot have a view of that agreement, and I've been three times to Rome."

When Church Militant spoke with Cdl. Zen in July, he had concluded that the pope's words and actions regarding China were largely owing to misinformation: "The people laugh at our pope because he is not well-informed."

"The people around him, especially this Cdl. [Pietro] Parolin ― he knows everything [about China], he has a lot of experience ― he knows how evil the Communists are, but I am sure he is not giving the right information to the Holy Father," concluded the cardinal.

Cardinal Zen has remained respectful towards Francis, explaining to New Bloom that his personal relationship with the pontiff is "wonderful," but he notes that the pope has failed to answer his letters and implement any of his suggestions.

"With Francis, personally wonderful relations. Even now. At the beginning of July this year, I had supper with the pope. But he doesn't answer my letters. And everything that happened is against what I suggested," said the cardinal.

He then mentioned three things that have occurred under Francis: "A secret agreement, being so secret you can't say anything. We don't know what is in it. Then the legitimization of the seven excommunicated bishops. That's incredible, simply incredible. But even more incredible is the last act: the killing of the underground."

On a visit to Rome in June 2018 — before the Vatican-China agreement went into effect in September — Cdl. Zen sent a letter to the papal residence, saying: "Holy Father, I am here in Rome. I would like to know who drafted that document. The so-called pastoral orientation. And I want to discuss with him on that document in your presence. I am here in Rome for four days, you can call me anytime, day or night."

He did not receive a response.

After persisting, he was finally told that the Holy Father said he could discuss whatever he wanted to discuss with Parolin, the Secretary of State.

When asked what Parolin was trying to accomplish, Cdl. Zen responded: "Oh, nobody can be sure, because it's a real mystery how a man of the Church , given all his knowledge of China, of the Communists, could do such a thing as he's doing now? The only explanation is not faith. It's a diplomatic success. Vainglory."

He continued to discuss what he intends to say to the pope when the opportunity arises: "Recently I learned that the Holy Father, on a flight back from (I don't remember where) said, 'Sure, I don't want to see a schism. But I'm not afraid of a schism."

"And I'm going to tell him: 'You are encouraging a schism. You are legitimizing the schismatic church in China.' Incredible," concluded Cdl. Zen.

The situation for the underground Catholic Church has been deteriorating since the Vatican-China agreement was approved.

It has become increasingly difficult for the faithful to find places to attend Mass, forced one faithful bishop to flee Communist guards and caused rampant confusion.