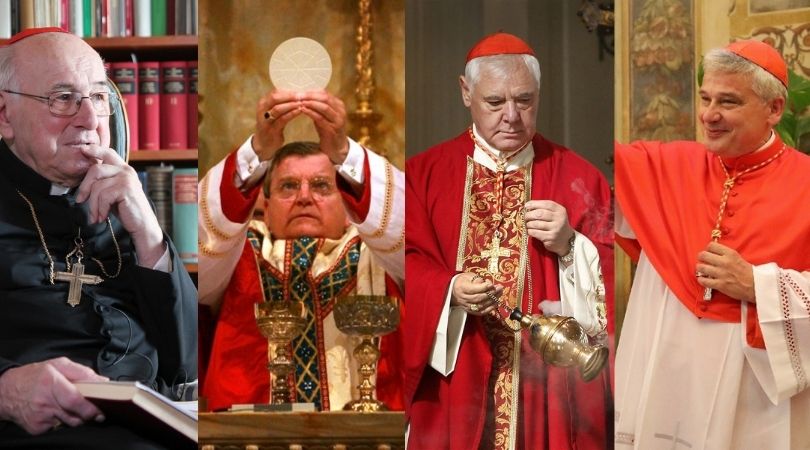 VATICAN CITY (ChurchMilitant.com) - Cardinal Walter Brandmüller, who asked Pope Francis to clarify the "grave disorientation and great confusion" in the apostolic exhortation Amoris Laetitia, is contesting the ban on "private" Masses at St. Peter's Basilica as "null and void."

Brandmüller noted that the order of the Vatican Secretariat of State, prohibiting a lone priest from celebrating Mass at the basilica's side altars had resulted in "general astonishment, incomprehension and anger in the Vatican."

"This is a case of presumptuousness or violation of the law by whomever," the "dubia" cardinal wrote Thursday in a guest article for German Catholic weekly Die Tagespost, noting the memo dictating the ban could be a "trial balloon" for further novelties and change.

"The very serious question that should be asked is whether this ought to be the way in which the power of the keys [of the Petrine office] should be exercised in the Church of Jesus Christ," the outspoken cardinal stressed.

Alluding to the potential abuse of papal power, Brandmüller emphasized that the "plenitudo potestatis" (fullness of power) — a term used by medieval canonists for the jurisdictional power of the papacy — was limited by both "natural law" and "Christian moral law."

"It is 'plenaria' insofar as it does not depend on any higher — earthly — power, but by no means limitless," the cardinal explained. Thus, if an order "violates both positive and natural law, the consequences of disregarding the law would need to be pointed out emphatically."

The very serious question that should be asked is whether this ought to be the way in which the power of the keys [of the Petrine office] should be exercised in the Church of Jesus Christ.

Pleading a pastoral case for pilgrims who visit Rome, Brandmüller stressed the uniqueness of the basilica above the tomb of St. Peter and the tombs of many saints in the basilica — "the center of the universal Church and, from the earliest times, a pilgrimage destination for believers from all over the world."

"To deny the many pilgrims, especially the priests who come to Rome in large numbers from distant parts of the world, the opportunity to celebrate Holy Mass, as it were, in the Father's house, is absolutely irresponsible," he remarked.

Reiterating arguments made by Cdl. Raymond Burke, who earlier called for the memo to be "rescinded immediately" for violating universal Church law in "both form and content," Brandmüller also dismissed the diktat as "not binding for reasons of form and content."

The former president of the Papal Committee for Historical Sciences has become the third cardinal to openly challenge the Vatican's unprecedented diktat — which also relegates the Traditional Latin Mass (TLM) to the tiny Clementine Chapel in the grottos of the basilica.

Last week, Cdl. Gerhard Müller, former prefect of the Congregation for the Doctrine of the Faith (CDF), told The World Over "nobody is obliged to obey" the diktat because the Secretariat of State did not have "disciplinary" or "theological competence" over liturgical matters at St. Peter's Basilica.

This is a case of presumptuousness or violation of the law by whomever.

"This letter is very strange, and this argumentation and the terminology — Holy Masses are 'suppressed' — doesn't sound very Catholic," Müller said.

Meanwhile, in what some are seeing as an act of defiance, papal almoner Cdl. Konrad Krajewski — entrusted with carrying out works of charity on behalf of the pope — celebrated Mass in Polish on Thursday at the tomb of St. John Paul II.

Other Catholics on social media, however, suggested that Krajewski was merely carrying on the tradition of his weekly Polish Mass and was not celebrating as a "private" Mass.

Rome-based tour guide Mountain Butorac, who has been tweeting his outrage over the banning of private Masses, commended the Polish cardinal for also being the first to open his titular church when Rome had closed its churches during the COVID-19 lockdown.

The so-called private Masses have been a spiritual resource for countless Catholic pilgrims who are able to participate in the Eucharist in their own native languages. Non-believers have also experienced conversion through the public witness of the Masses.

The question of whether the Polish cardinal actually acted against the stipulations of the controversial memo is only serving to further highlight the ambiguity underlying the wording and legality of the document.