MARAWI CITY, Philippines (ChurchMilitant.com) - As the Filipino armed forces are finishing off a radical Islamic rebellion, the Holy Mass has returned to a looted cathedral in the war-torn city.

On Tuesday, an army chaplain offered the eucharistic sacrifice in St. Mary's Cathedral in Marawi City on the island Mindanao. In attendance were hundreds of soldiers in uniform. It was the first Mass offered at the cathedral in over four months since its capture by Islamic rebels in late May.

During the prayers and hymns of the Mass, gunfire and explosions were reportedly heard in the distance — part of the Filipino armed forces' continued battle to crush an Islamic insurgency called the Maute group.

The Maute group, an ISIS affiliate, has wreaked havoc on Marawi and surrounding areas ever since the rebellion broke out in May. In response, Filipino armed forces have beaten back the terrorists, and only a few rebel gunmen remain. The conflict has left over 800 dead and over 300,000 refugees.

The Maute group stormed St. Mary's Cathedral at the start of the uprising in May. In early June, the extremists vandalized the cathedral, destroying sacred statues and setting fires. The vandalism was boastfully caught on video and shared online.

At some point during their occupation, the ISIS-inspired extremists seemingly desecrated the large crucifix over the altar by ripping off the corpus, the sculpture of Christ's Body on the Cross.

When government forces reclaimed the cathedral on August 25, they found it partly charred and riddled with bullet-holes. Officials showed in a press conference some chalices and an ornate crucifix that were still intact.

The militants who stormed the cathedral also took hostage a Catholic priest, Fr. Teresito "Chito" Soganub, as well as several laity. There were soon threats to behead the priest, but these threats were never carried out. Father Soganub was held captive for about three months, until a September 16 secret operation rescued Fr. Soganub and one other hostage.

On September 20, Bp. Edwin de la Peña of Marawi told Agenzia Fides that there will be a special appeal to pay for the cathedral's much-needed repairs.

Just this Wednesday, government forces rescued another 17 hostages, and four rebel gunmen were killed during the rescue mission.

The Philippines has a large Catholic majority, however, the city of Marawi is located in a Muslim-majority region called the Autonomous Region in Muslim Mindanao. Before the insurgency, the city operated under an adapted form of Sharia law, leaving out corporal punishment and exempting non-Muslims from certain obligations.

The Filipino military says the conflict is almost over. But some are losing confidence, as the military has repeatedly failed to meet its own deadlines for eradicating the Maute group.

The Islamic militants' numbers are certainly dwindling, but some fear unrest among the region's refugees if the battle keeps dragging on. 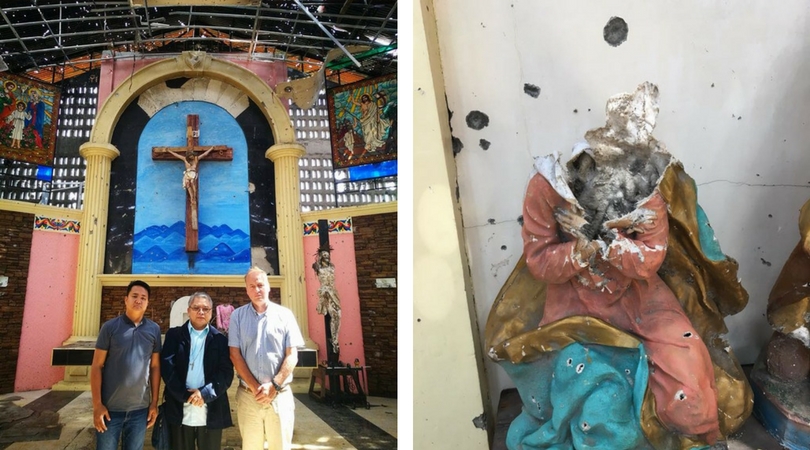