Cardinal Burke Weighs In on Gay Pride and Inviolability of Confessional 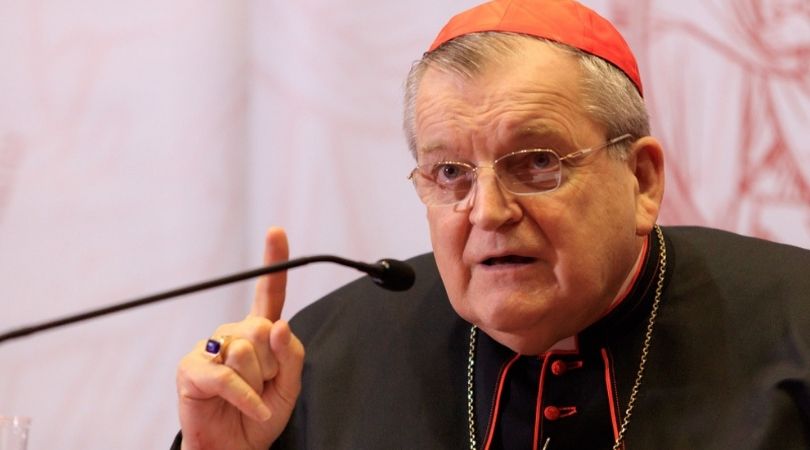 The June chat was posted on the CA website July 8, just days after the 44th anniversary of Cdl. Burke's priestly ordination on June 29, 1975, a point highlighted in the chat.

McKenna asked Cdl. Burke to react to the tweet Bp. Thomas Tobin of Providence, Rhode Island, sent out at the start of LGBT Pride Month, that gained a lot of attention, much of it criticism from Catholics and Catholic priests.

Tobin's tweet was framed as a reminder to Catholics who "should not support or attend LGBTQ 'Pride Month' events held in June."

Tobin warned, "They are especially harmful for children."

Burke said that Tobin was expressing "fatherly care of the flock especially of the small children" who are "so scandalized by seeing acts that are manifestations which are not in accord with moral law not in accord with our own nature."

Burke repeated his commendation of Tobin for calling out Pride Month as "expression of the capital sin of lust ... which above all, corrupt [children] in their innocence."

The CA president also asked the cardinal to weigh in on a recent move by Abp. Charles Thompson of Indianapolis which stripped the name "Catholic" from a Jesuit school in the diocese.

The school had refused to dismiss a teacher in a same-sex marriage, thus evoking Thompson's response.

The cardinal said: "Thompson has the duty to safeguard the name Catholic."

He said teaching must "be sound and in accord with Catholic faith and morals" and that "teachers must give Christian witness in their daily lives."

Regarding the bill under review in California that would require a priest to report to police an incident of sexual abuse he hears in the confessional, Burke said: "Confession a sacred communication" and "inviolable."

Church teaching maintains that "confession is made to God Himself," adding, "It is a sacrament, not a therapy session."

The priest would have to go to jail before he could report the confession to the police.

Burke made clear that the priest would have to go to jail before he could report the confession to the police.

Cardinal Burke is noted for co-authoring "Seeking Clarity: A Plea to Untie the Knots in Amoris Laetitia," a letter to Pope Francis asking for clarification on Amoris Laetitia ("The Joy of Love"), the post-synodal apostolic exhortation by Pope Francis on love in the family signed on March 19, 2016.

Burke said that he shares Francis' devotion to Our Lady, Untier of Knots, so in that spirit, he, along with Cdl. Walter Brandmüller, Cdl. Carlo Caffarra and Cdl. Joachim Meisner, asked the Pope "to untie some of the knotty statements of the document for the good of souls."

One of the doubts, or dubia, that Cdl. Burke and his co-authors asked clarity on concerned Church teaching forbidding civilly "remarried" divorcees engaging in sexual relations to receive Communion.

Francis has yet to respond to the dubia.

The June CA conversation ended with Cdl. Burke saying a prayer about the Sacred Heart, to whom the cardinal has had a life-long devotion:

Almighty God, from the glorious pierced heart of Your Only Begotten Son, You pour forth into our hearts the graces by which we are cleansed of our sins and enflamed with Your love.

We thank You for the Sacred Heart of Jesus.

We ask that You make our hearts evermore like the heart of our Lord and Redeemer, Our Lord Jesus Christ, Your Son.