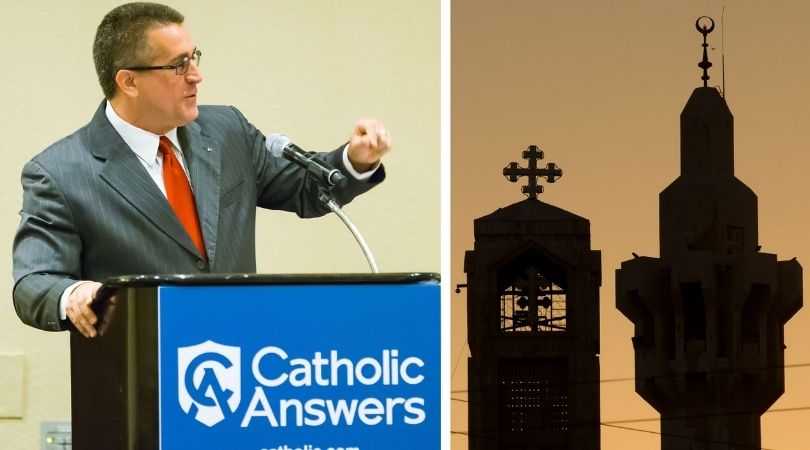 Church Militant asked Staples if his position could be summed up in the proposition: "The Allah of the Koran is the Holy Trinity of Christians."

Staples responded: "I don't think you yet understand the position of the Catholic Church. Even though it is true that 'Allah' and the Blessed Trinity are each referring to the same God."

"You seem to want to imply by that, that unless you accept the truth of the Trinity, you are talking about another God. That is not true," he explained.

The theological postulate that "Islam's God is also the same God as worshipped by Catholics," as British theologian and academic Gavin D'Costa phrases it, appears for the first time in Catholic teaching in Vatican II in Nostra Aetate 3 and Lumen Gentium 16.

Robert Spencer, author of 21 books on Islam, noted he had no difficulty with Staples' claim that the Vatican II statement that God's plan of salvation includes Muslims meant "only that God desires them to be saved" and "no Christian could possibly disagree with that."

However, "many observers have noted that Vatican II maintains a posture of studied ambiguity, making statements that were intentionally vague and can be taken in any number of ways," Spencer explained.

Vatican II maintains a posture of studied ambiguity, making statements that were intentionally vague and can be taken in any number of ways.

"I have spoken to many Catholic groups and always encountered Catholics who believed that it was wrong to oppose even jihad violence and Sharia-based oppression of women and others because the Church taught that we worshiped the same God," he continued, adding:

The "same God" phrase can be interpreted in an orthodox manner, as can the phrase about the plan of salvation, but it can also be taken in a way that leads to numerous blind alleys and outright heresies, including indifferentism and the relativization of all religious ideas without regard for truth. In fact, the pope has just quoted the Qur'an in an encyclical, which will lead many Catholics to believe that the Qur'an is holy writ.

Staples later responded: "When you say, 'Is the God of the Koran the Blessed Trinity,' that cannot be answered with a yes or no answer. Some will take that to mean the Church is saying the Koran is inspired or something like that."

Of course, the Catholic Church acknowledges that the Qur'an is not the inspired word of God. It is filled with errors. ... There is little doubt that Satan, the Father of Lies, has inspired much of what we find in the Qur'an. But that does not mean that the Qur'an does not acknowledge what the Devil himself acknowledges — 'you believe God is one, you do well, the demons believe and tremble' (James 2:19).

"It seems to me if people want truth, they go beyond six-word statements and try to ascertain truth," Staples remarked.

Staples, however, does not provide evidence of a Catholic magisterial document which states that "the Qur'an is not the inspired word of God" or is filled with error.

Staples in September evaded a question about whether, according to the Catechism, Catholics and Muslims worship the same God

Indeed, as Islamic scholar David Marshall observes, "since no explicit theology of the Qur'an is stated either in the conciliar documents or indeed in post-conciliar teaching, the field has been open for Catholic scholars to argue for a range of approaches." Catholic scholars, he says, are "at the positive end of the spectrum," claiming that "the Qur'an is 'an authentic Word of God, but one in part essentially different from the one in Jesus Christ.'"

The pivotal question before us is, 'Is the Allah of Islam really one and the same as the LORD God of the Bible?'

In his 2013 apostolic exhortation Evangelii Gaudium, Francis affirmed the Qur'an as "sacred writings of Islam [that] have retained some Christian teachings," adding that "the proper reading of the Koran [is] opposed to every form of violence."

Sam Solomon, co-author of Not the same God: Is the Qur'anic Allah the LORD God of the Bible? and a convert from Islam, told Church Militant that the problem was with the ambiguity in the word "God," which even in monotheistic religions meant different things to different people.

"The pivotal question before us is, 'Is the Allah of Islam really one and the same as the LORD God of the Bible?'" Solomon asked. "Is he the Triune God who made man in His own image — then fellowshipped with Adam, and later spoke directly to Abraham, Isaac, Jacob, Moses and a long line of prophets?"

"Finally, is he the God who was fully revealed in the person, life, death and resurrection of Christ Jesus? In short, is Allah the same deity as successively revealed within history throughout the entire biblical text as the Alpha and the Omega? Or, is he quite different in both nature and purpose?" Solomon queried.

"Embedded in the claim of 'sameness,' is the further tacit claim that the LORD God of the biblical scriptures was never Triune in His nature, but was always detached, absolutely singular, and thus in line with the doctrine of 'Islamic monotheism,' i.e., the 'Tawheed,'" Solomon writes.

"Notwithstanding many apparent similarities, the Allah of Islam as expressed in the doctrine of Islamic monotheism (i.e., Tawheed) is the diametric opposite of the Triune LORD God of the Bible: opposite in nature, character, knowability, description and attributes," Solomon notes.

Solomon also emphasizes the God of the Old Testament is not the same as the Allah of the Qur'an because "the Qur'anic Allah never reveals himself as biblical Yahweh does."

"The best Allah could do is reveal his will but never himself. He is an unknowable — capricious in the sense that he is never bound by any covenant because that would make him accountable," Solomon notes.

According to the Islamic unitarian concept (Tawheed), Christianity is classified as polytheism and Judaism is considered a subtle form of idolatry.

In September, Church Militant reported on a debate sparked by Staples after the apologist evaded a charged question asking whether the Catechism was right to affirm that Muslims "together with us [Catholics] adore the one, merciful God."

In a response, Staples said he did not "duck the question," admitting he never really answered the caller's question in full.

Muslim scholars agree with us in general on this point. And inasmuch as they teach God to be "the one God, living and subsisting in himself [absolutely simple]; merciful and all-powerful, the Creator of heaven and earth," they can't get any more correct than that on the level of natural theology. ... And as such, it is correct to say the Muslims who believe this believe in and adore the same God we do.

"According to the Islamic unitarian concept (Tawheed), Christianity is classified as polytheism and Judaism is considered a subtle form of idolatry," Philips writes.

Islamic monotheism is the "belief that Allah is One, without partner in his dominion, One without similitude in his essence and attributes, and One without rival in his divinity and worship," he adds.

Philips quotes the canonical hadith al-Bukhari to point out that when Muhammad sent Mu'adh ibn Jabal as governor to Yemen, he told him: "You will be going to Christians and Jews, so the first thing you should invite them to is the assertation of the oneness of Allah."

Scholars agree on the politics of including the controversial texts into Vatican II. After positive statements were made on the Jews, Arab bishops insisted that a positive statement on Islam would show that "Nostra Aetate was not a partisan statement supporting Jews against Muslims, or Israel against Arab nations," D'Costa writes.

Patriarch Maximos IV, on behalf of the Eastern Rite bishops, requested: "If we are to discuss the Jews, then we should likewise take up the question of Moslems, among whom we must live in a minority."