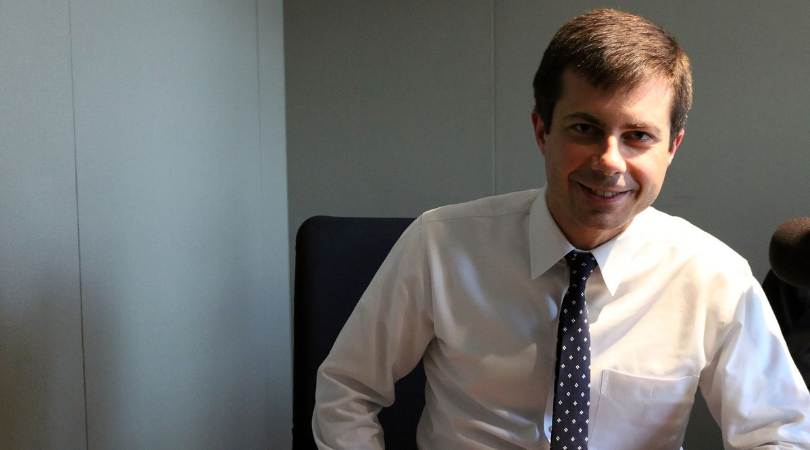 Peter Buttigieg is mayor of my hometown of South Bend, Indiana. Both of our dads taught at Notre Dame. We were both baptized Catholic. When we were in high school, I founded the Campus Conservative Club, while Pete became an ardent Bernie Sanders fan.

So I started paying attention to Pete's campaign, even though most of the other folks who do seem to be sodomites or their political brothers in arms.

On reflection, maybe it was more worth reporting back when Buttigieg started trashing Christians as "hypocrites" and "Pharisees." But maybe the bigger news, then, from the Sodomite Syndicate was that Vice President Mike Pence had offended Buttigieg by vilifying his "marriage" (he has a male partner).

It was party time at the sodomite fundraiser a couple of weeks ago when Buttigieg proudly declared, "Mr. Vice President, it [my marriage] has moved me closer to God. ... Your quarrel, sir, is with my creator."

It was fake news, of course — as Justice Arthur Goldberg used to say, "A gross canard, cut out of whole cloth." Pence had never criticized Buttigieg's sex life. In fact, his only public statement we can find regarding the mayor comes from 2015, when Gov. Pence said of his fellow Hoosier, "I hold Mayor Buttigieg in the highest personal regard. We have a great working relationship. I see him as a dedicated public servant, and a patriot."

So Buttigieg is a buffoon. No news there, right?

But wait — what if he's so wrong, he's right? After all, he's a sodomite who supports infanticide. Now, if he worships the gods of Sodom (whose name lives on in infamy) and Moloch (who demanded child sacrifice to keep him happy), maybe Christians would find the elevation of those gods to the national pantheon more than a little troubling.

My 15 Minutes of Beto

OK, so we're "hypocrites" and "Pharisees." But where is Buttigieg getting his lines? Well, radical Democrats have gotten moral support from Catholic bishops for years (and have paid them off with billions in taxpayer funding).

In fact, Bernie Sanders, Buttigieg's high school hero, recently summed up the party line at a campaign rally: Donald Trump is "the most racist, sexist, homophobic, bigoted president in history," he told the cheering crowd. That message harmonizes nicely with the endless palaver from Catholic bishops at the U.S. Conference of Catholic Bishops, who have been feeding the Left's anti-white, anti-American frenzy for years, calling us "nativists," "xenophobes" and the like.

And meanwhile, all along, they give pro-abort Catholic pols a pass.

He lashed out at nine pro-life state attorneys general and one governor — among them several Catholics — who opposed Obama's unconstitutional DACA decree.

"When I hear their legalistic insistence upon every letter of our broken immigration law being carried out to this cruel degree, I can hear Jesus' indignant response: 'Woe to you, scribes and Pharisees, you hypocrites!'" he wrote — hot stuff.

Well, Catholic pro-abort Robert Francis "Beto" O'Rourke of El Paso, Texas was Seitz's congressman at the time. So I called Beto to talk with him about his pal the bishop, and we spent an amicable 15 minutes discussing his close work with Seitz on immigration issues.

And oh, by the way, Beto confirmed that Seitz had never publicly condemned his 100% pro-abortion record.

So I hung up and wrote Seitz, who comes from a big Catholic family (I taught his brother, Steve, at the University of Dallas in the 70s). I asked if it was true, that he'd never criticized O'Rourke's pro-abortion record.

"I have met with Congressman O'Rourke privately and expressed the Church's position on abortion as well as the entire range of Catholic moral and social teachings," the bishop finally responded, after his secretary explained that the office was scrambling through records to provide a response.

So Beto was right. Seitz had never criticized him publicly.

So Beto was right. Seitz had never criticized him publicly. And Beto could have it both ways: Beto could brag about Seitz "working closely" with him in public on amnesty issues, while Seitz would remain silent in public on Beto's abortion record.

By the way, Seitz's state senator and state representative are also 100% pro-abortion Catholics; we could find no record of Seitz ever criticizing them either.

To sum it up: The bishops endlessly sing the praises of their Democrat allies, browbeat the faithful about global warming, remain silent about pro-abort Catholic pols and cover up for their guilty brethren in the abuse scandals. But they aren't "hypocrites" and "Pharisees" — we are, because we disagree with their radical left-wing political agenda.

We demand the truth and transparency they promised but never deliver. We insist that they cleanse the hierarchy of the "homosexual cliques" that Benedict identified on April 10.

In the meantime, Bernie, Beto and Buttigieg will get a free ride, while the bishops slander and scandalize and never, ever apologize.