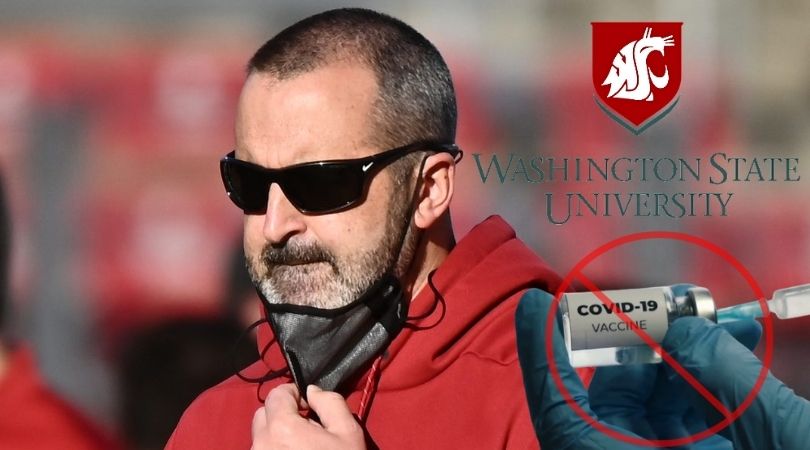 'Discriminatory and vindictive' over his Catholic faith

PULLMAN, Wash. (ChurchMilitant.com) - A Catholic football coach is suing the university he once worked for, after the institution rejected his request for a religious exemption from the COVID vaccine and terminated his employment.

Nick Rolovich, a devout Catholic and now former head coach of the Washington State University (WSU) football team, has refused the abortion-tainted jab mandated for state workers by Washington governor Jay Inslee. Rolovich is now on the offense after being fired Oct. 18 following his religious exemption being denied: He's looking for one more shot at the end zone before the clock runs out.

Rolovich, through his attorney, Brian Fahling, is accusing his former boss, WSU athletic director Pat Chun, of "discriminatory and vindictive behavior" with regard to his Catholic faith. Hence, Fahling insisted, "The termination of Washington State football coach Nick Rolovich on Monday was unjust and unlawful."

Fahling is proverbially throwing the penalty flag at WSU, saying in a written statement his client was the target of unjust discrimination:

Immediately after terminating Coach Rolovich, WSU athletic director Pat Chun directed campus police to escort the coach to his car; he wasn't allowed into his office, and he was not even allowed to speak to his team. Since at least early April, it became clear that Chun had already determined that Coach Rolovich would be fired. Chun's animus towards Coach Rolovich's sincerely held religious beliefs and Chun's dishonesty at the expense of Coach Rolovich during the past year is damning and will be thoroughly detailed in litigation.

Fahling did not stop there. The claim made against the university is that Chun's vindictive act of discrimination was not based on race, ethnicity or sex, but rather was the fruit of deep-seated hatred for his client's Catholicism:

Chun's discriminatory and vindictive behavior has caused immeasurable harm to Coach Rolovich and his family. ... It is a tragic and damning commentary on our culture and, more specifically, on Chun, that Coach Rolovich has been derided, demonized, and ultimately fired from his job, merely for being devout in his Catholic faith.

Chun, in an evening news conference Monday, struck what appeared to be an accusatory tone regarding Rolovich.

"As the director of athletics and the steward of this department, I take full responsibility for hiring Nick," said Chun. "We believed we had found the perfect fit and a long-term solution for Washington State football. Unfortunately, we stand here today making a transition."

The Seattle Times reported Rolovich came to Washington State two years ago as a fun-loving coach, known nationally for his off-the-wall antics and an ability to win.

There has been no statement about this from Spokane bishop Thomas Daly, whose diocese includes Washington State University. Nonetheless, Daly recognizes that taking one of the COVID vaccines available today is remote cooperation with evil.

However, as theologians from the Vatican to Washington have explained, such cooperation, when there is grave danger present, is morally licit. Skeptics wonder, however, if COVID-19 is indeed a grave danger for most people, given that over 98% survive infection.

It's also of note that the Vatican's official doctrinal office — the Congregation for the Doctrine of the Faith — insists vaccines must be voluntary. Such medical treatment should never be forced on anyone.

The termination of Washington State football coach Nick Rolovich on Monday was unjust and unlawful.

Rolovich had three years left on his contract, and, according to Yahoo Sports, around $9 million was left on the contract when it was terminated. Because it was terminated "with cause," Rolovich is not expecting any further payments from the university.