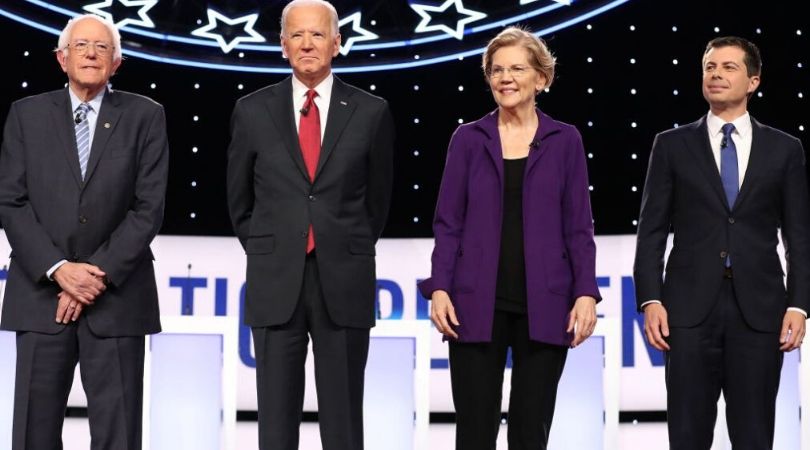 MANCHESTER, N.H. (ChurchMilitant.com) - A Catholic college in the diocese of Manchester, New Hampshire will hold a nationally televised debate of the Democratic presidential candidates, all of whom vociferously support abortion, "same-sex marriage" and the curtailing of religious freedom.

Saint Anselm's College, sponsor of the New Hampshire Institute of Politics, will hold the presidential debate at the college's Thomas F. Sullivan Arena on Feb. 7 — four days before the nation's first presidential primary is held in New Hampshire.

The Catholic community and Catholic institutions should not honor those who act in defiance of our fundamental moral principles.

Some are not happy about what they see as an apparent contradiction.

In a 2003 statement by the U.S. Conference of Catholic Bishops, "Catholics in Political Life," the bishops instructed: "The Catholic community and Catholic institutions should not honor those who act in defiance of our fundamental moral principles. They should not be given awards, honors or platforms which would suggest support for their actions."

C.J. Doyle, communications director for the Friends of the St. Benedict Center in Richmond, New Hampshire, points out that this debate honors these candidates by giving them a forum to espouse anti-Catholic stands on today's crucial issues:

How can any rational person reasonably be expected to take seriously Catholic opposition to abortion when a Catholic institution provides a televised national platform to politicians who not only believe that the killing of hundreds of thousands of preborn children each year in this country ought to remain legal, but who aggressively advocate for the removal of all remaining restrictions on abortion? All of this is compounded by the complicit silence of the diocese of Manchester, whose ordinary, Bp. Peter Libasci, not only failed to take steps to prevent this disgrace, but refuses to even publicly criticize it. This is the same diocese which, without warning or provocation, imposed draconian sanctions on the faithful Catholics of the Saint Benedict Center for upholding traditional Catholic beliefs.

Other Discord With Rome

The St. Benedict Center, whose Slaves of the Immaculate Heart of Mary are historically affiliated with Fr. Leonard Feeney, S.J., has itself not been without controversy. As a group, they have been sanctioned by the diocese of Manchester for reportedly being in disagreement with the Holy See on the proper interpretation of the dogma Extra Ecclesiam Nulla Salus ("Outside the Church there is no salvation"). Church Militant covered this story last January, and a Vortex episode found a very different story with regard to Fr. Feeney and diocesan politics.

On this dogma, the Catechism of the Catholic Church states in sections 846–847:

How are we to understand this affirmation, often repeated by the Church fathers? Re-formulated positively, it means that all salvation comes from Christ the Head through the Church which is his Body: Basing itself on Scripture and Tradition, the Council teaches that the Church, a pilgrim now on earth, is necessary for salvation. ... Hence they could not be saved who, knowing that the Catholic Church was founded as necessary by God through Christ, would refuse either to enter it or to remain in it. ... This affirmation is not aimed at those who, through no fault of their own, do not know Christ and his Church.

The Friends of Saint Benedict Center call the decision by St. Anselm's to host the Democratic debate a "grave scandal, a flagrant betrayal of Catholic principles, and an overt violation of the explicit prohibitions contained in 'Catholics in Political Life.'"

Doyle contacted Church Militant, noting that St. Anselm's College is listed as an "official Catholic institution by the Roman Catholic diocese of Manchester," and that the local bishop has a duty to respond appropriately to scandal.

The president of St. Anselm College, Dr. Joseph Favazza, sees it differently: "Saint Anselm's is proud to play a role to support and shape the American democratic process with this important event," he said in a written statement.

Dr. Favazza was appointed president of St. Anselm's College in July 2019. His biography on the school website mentions nothing about intentions to help the college uphold its Catholic identity and remain faithful to Catholic teaching.

Church Militant asked Dr. Favazza what he thought of his college hosting a nationally televised forum for candidates who strongly support what the Church considers grave intrinsic evils relating to human life, sexuality and the family.

"While we do not prevent ideas from being discussed," he said, "we take seriously our commitment to assist students in understanding which ideas are worth taking seriously in light of our ethical and religious commitments. This ability is part of our responsibility as we prepare citizens to work, live and thrive in a pluralistic democracy."